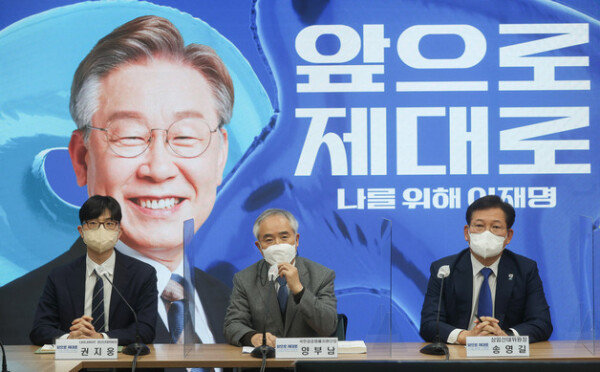 Yang Bu-nam, head of the National Verification Legal Support Group of the Democratic Party of Korea, speaks at a meeting of the senior leadership team held at the company’s headquarters in Yeouido, Seoul on the 14th. 2022.1.14/News1 © News1

On the 28th, the Democratic Party of Korea filed a complaint with the prosecution against Park Soo-young, a member of the People’s Power, who raised suspicions that Lee Dong-ho, the eldest son of presidential candidate Lee Jae-myung, received preferential treatment while serving in the military.

The Democratic Party’s National Verification Legal Support Group (Chairman Yang Bu-nam) revealed this in a press release on the afternoon of the day, saying, “The accused (Rep. Park) has continuously produced and distributed false information accusing Lee and others in a short period of time, and the 20th presidential election “The motive for the crime and the purpose of the defeat were recognized as the false facts were announced at an imminent time without any explanatory material.”

They said, “Even if the false information announced later is found to be unfounded, there are concerns that the reputation of the candidate will be damaged, and the credibility and objectivity of the presidential election will be seriously damaged by causing serious consequences that mislead voters’ choices in the election. ” and called for an immediate summons and investigation of Rep. Park.

Previously, Rep. Park raised suspicions that Lee was ‘preferentially hospitalized’ without a personnel order at the Armed Forces Capital Hospital in Bundang-gu, Seongnam-si, in 2014 while Lee was serving, and through his social network service (SNS), “There are also 6 soldiers with symptoms of shelling on Yeonpyeong Island. I was in a private room, but because of a ligament rupture in Lee Dong-ho, I had a special room for 3 months??” he posted.

In response, the Democratic Party said in the complaint letter, “The photo posted by the accused (Rep. Park) on Facebook is clearly a break room, not a special room in the Armed Forces Capital Integrated Hospital.” By doing so, the false information was made public, leading to the misconception that the son of candidate Lee was hospitalized with preferential treatment.”

The Democratic Party’s election task force task force held a press conference on the afternoon of the same day and released Mr. Lee’s 2014 military service personnel record and a copy of his medical record. According to Mr. Lee’s ‘personnel history table’ released by them, it is stated that Mr. Lee took a leave of absence for ten days from July 19 to 28, 2014, and in the ‘Certificate of Copy of Medical Record’ in July 2014 It was recorded that he underwent surgery on the 24th.

Rep. Kim Seung-won, head of the current issue response task force, said, “A suspicion raised on inaccurate grounds is not a suspicion, but a criminal act in itself.” We are distributing it in an image,” he criticized.

He continued, “There are suspicions that there is a non-election organization that indiscriminately spreads fake news or such in the name of ‘Again SNS Headquarters’ by those who received a letter of appointment (from the official organization of the People’s Power). I think we should grab the evidence and stop responding.”

When asked about Lee’s exact hospitalization period, he said, “It’s okay to say that it’s personal data.” Regarding how Lee, who served in Jinju, Gyeongnam, was admitted to the Armed Forces Capital Hospital, he replied, “I had surgery in Seongnam and went to a nearby capital hospital.”

Meanwhile, in a statement immediately after the press conference of the current issue response task force, Park Soo-young’s office said, “Rep. Park Soo-young’s office has consistently raised the issue of being admitted to the Seongnam Armed Forces Capital Hospital without a personnel order as preferential admission.” “The evidence presented by the Lee Jae-myung camp today. Nowhere is there a personnel order stating that Lee’s eldest son was hospitalized at the Armed Forces Capital Hospital. If this candidate asks A, answer A.”

Janet Jackson, mother of a hidden big girl? She finally breaks the silence