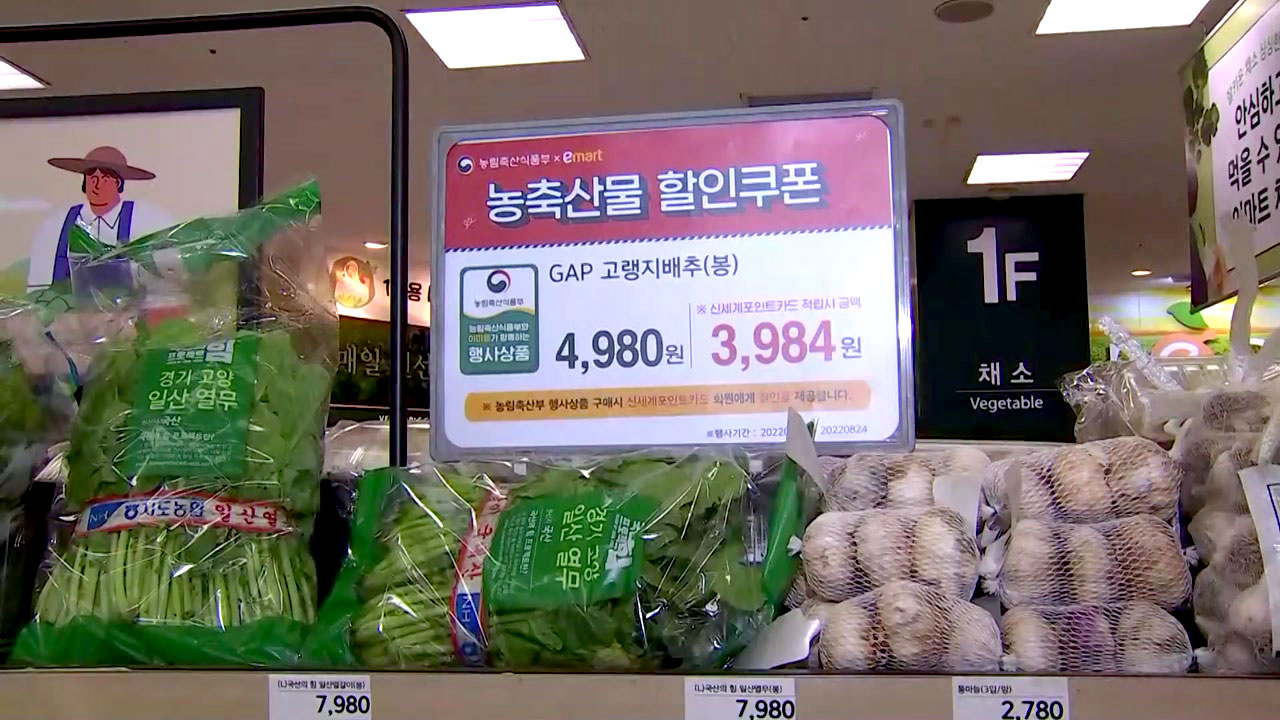 Ahead of Chuseok, the cost of shopping carts is increasing as the price of major holy items does not know that the price will fall.

In order to stabilize Chuseok prices, the government is holding a discount competition for agricultural, livestock and marine products in large marts and traditional markets starting today.

Connect with reporters who are on-site. Reporter Hae-ri Yoon!

Yes, it is available at E-Mart in Seongsu-dong, Seoul.

Yes, the event started today at the mart.

Discounted items are displayed in such a way that they are easy to recognize.

In particular, they are selling Chinese cabbages from high altitudes, where prices have risen significantly due to the early heat and heavy rains.

The price at the mart for a single cabbage is 4,980 won, and if you apply a 20% government discount coupon to it, you can purchase it at a cheaper price of about 1,000 won.

Here, we are running a discount event for 15 agricultural, livestock, and marine products, such as onions, garlic, potatoes, and apples, whose prices have risen sharply in recent years.

The average price of major holy items this year has risen by 7.1% compared to last year’s Chuseok.

In particular, the price of radish rose 43%, and cabbage and potatoes soared more than 30%.

As the burden on the shopping cart increased, the government invested 65 billion won in discount coupons for agricultural, livestock, and marine products on the largest scale ever, so that the price of Chuseok holiday items could be felt similar to that of a year ago.

Until the 12th of the month following Chuseok, you can use government discount coupons at large marts or traditional markets to buy agricultural, livestock, and marine products up to 30% cheaper.

First of all, at large marts, you will receive a 20% discount on Chuseok holiday items, up to a maximum of 20,000 won per person.

You may be wondering how to get a discount, but the discount is applied automatically when you checkout at the mart.

In the case of traditional markets, the discount range is slightly larger.

Event items are different for each store, and overlapping benefits are possible if the event company and period are different.

As the inflation rate is steeper than ever, it is interesting to see how much the government’s Chuseok stabilization measures will reduce the burden of shopping cart prices for ordinary people.

This is YTN Haeri Yoon from Seongsu Branch of E-Mart.

Researchers reveal how the brain adapts to threat

9,000 households were affected: the power outage paralyzed the Wörthersee area for almost an hour