POSCO pursues shared growth with suppliers, partners, and customers with the goal of establishing a global supply chain and a strong steel ecosystem for the domestic steel industry.
activities are continuing. The newsroom introduces POSCO’s excellent win-win cooperation programs through best practices for win-win growth by sector.
In this episode, we covered the current status and history of financial support programs that POSCO is operating for win-win and shared growth with the domestic steel industry.

On June 9, at the 23rd ‘Iron Day’ commemorative event, officials from the Korea Iron and Steel Association, POSCO, Hyundai Steel, and IBK Industrial Bank attended and signed a business agreement to create the ‘Steel ESG Win-Win Fund’. POSCO, Hyundai Steel, the Steel Association, and Industrial Bank of Korea (IBK) jointly created a fund worth KRW 150 billion to support ESG management of small and medium-sized enterprises in the domestic steel industry.

With the fund created this time, it was possible to support up to 2 billion won for companies that have business relations with POSCO or Hyundai Steel. Even companies with no business relationship can borrow funds for up to two years through the Korea Steel Association.

Since the fund was created in earnest, applications from small and medium-sized companies in the steel industry that needed ESG management-related funds continued to line up. POSCO comprehensively evaluated the ESG-related certification status of the applicant company (eco-friendly company, social company, company with excellent governance structure) and the fidelity of the fund utilization plan for ESG, and recommended it to IBK. For companies, a total of KRW 59 billion was loaned at a discount rate of 1.43%.

With this fund as an opportunity, it is evaluated that ESG management is being further strengthened throughout the steel industry. In addition to Capex investment, it became an opportunity to preemptively build energy reduction and environmental facilities for suppliers and partners who did not have enough funds, and it is known that investments for the safety, health, and welfare of employees are continuing.

Aerix, a POSCO PHP supplier and a comprehensive atmospheric environment facility company, said, “There was a need for improvement in the ESG field, such as technology patents for air environment prevention facilities and acquisition of nationally recognized quality certification, but POSCO’s steel ESG co-prosperity in a situation where financing was not easy. It was easy to raise funds through the fund,” he said, “I am grateful to POSCO and the Steel Association for their support in ESG management.”

This is not the first time POSCO has provided financial support for SMEs. POSCO has already introduced a leading financial support program in the steel industry to lay the foundation for mutual growth among large, medium and small businesses, and has made an exemplary case of win-win management compared to other industries.

In response to the financial support, small and medium-sized enterprises (SMEs) cooperated with great response, and since 2009, POSCO Network Loan with a limit of KRW 500 billion has been launched to provide low-interest loans of up to 1% with POSCO contracts as collateral to SMEs lacking collateral. In the same year, POSCO contributed KRW 10 billion to the Korea Credit Guarantee Fund and Technology Credit Guarantee Fund, and based on the funds contributed, guarantees were provided to subcontractors, and banks provided low-interest loans to subcontractors based on this. A ‘win-win guarantee program’ has also been implemented.

The loan is repaid as soon as POSCO pays the price, and in this case, the secondary partner company was able to collect the sales price early, so it was possible to secure stable liquidity.

A total of KRW 566 billion was raised by POSCO with major financial institutions, including the ‘Shared Growth Special Fund’ created with IBK Industrial Bank of Korea. ’22. As of October, it is providing loans of KRW 441.5 billion to 354 primary and secondary trading companies of the POSCO Group.

The CEO of 2nd-tier partner company B said, “While I was having difficulties managing the company due to rising raw material prices and labor costs over the past few years, I was introduced to the POSCO Win-Win Cooperation Fund by an acquaintance and was able to receive a larger amount of support at a lower interest rate than the market interest rate.” “The amount of support currently received is a great help in stabilizing the company’s management,” he said. 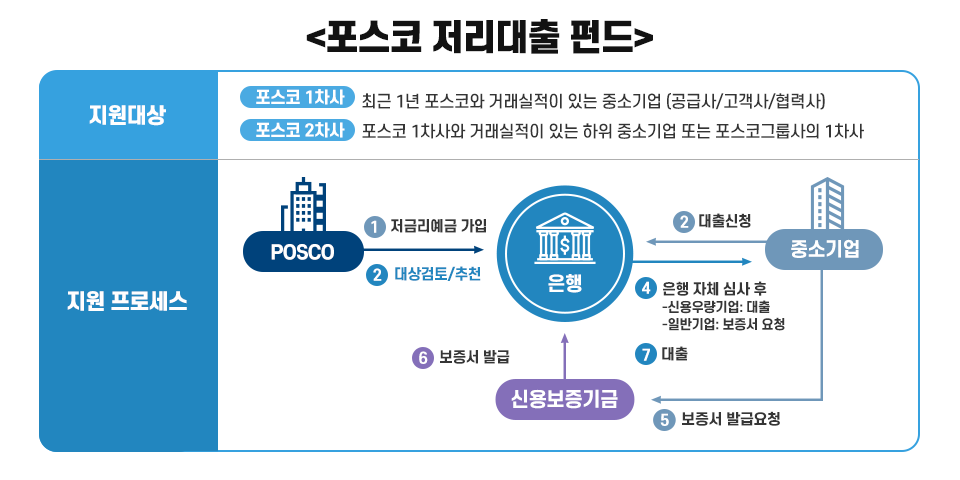 Formation with the Steel Association and Hyundai Steel to strengthen the steel industry in 2020
The global liquidity crisis that came along with the COVID-19 pandemic in early 2020 was no exception to mid-sized and small-sized steelmakers. In order to solve problems at the industry level, in June 2020, POSCO will create a for strengthening the industry ecosystem centered on the Steel Association. 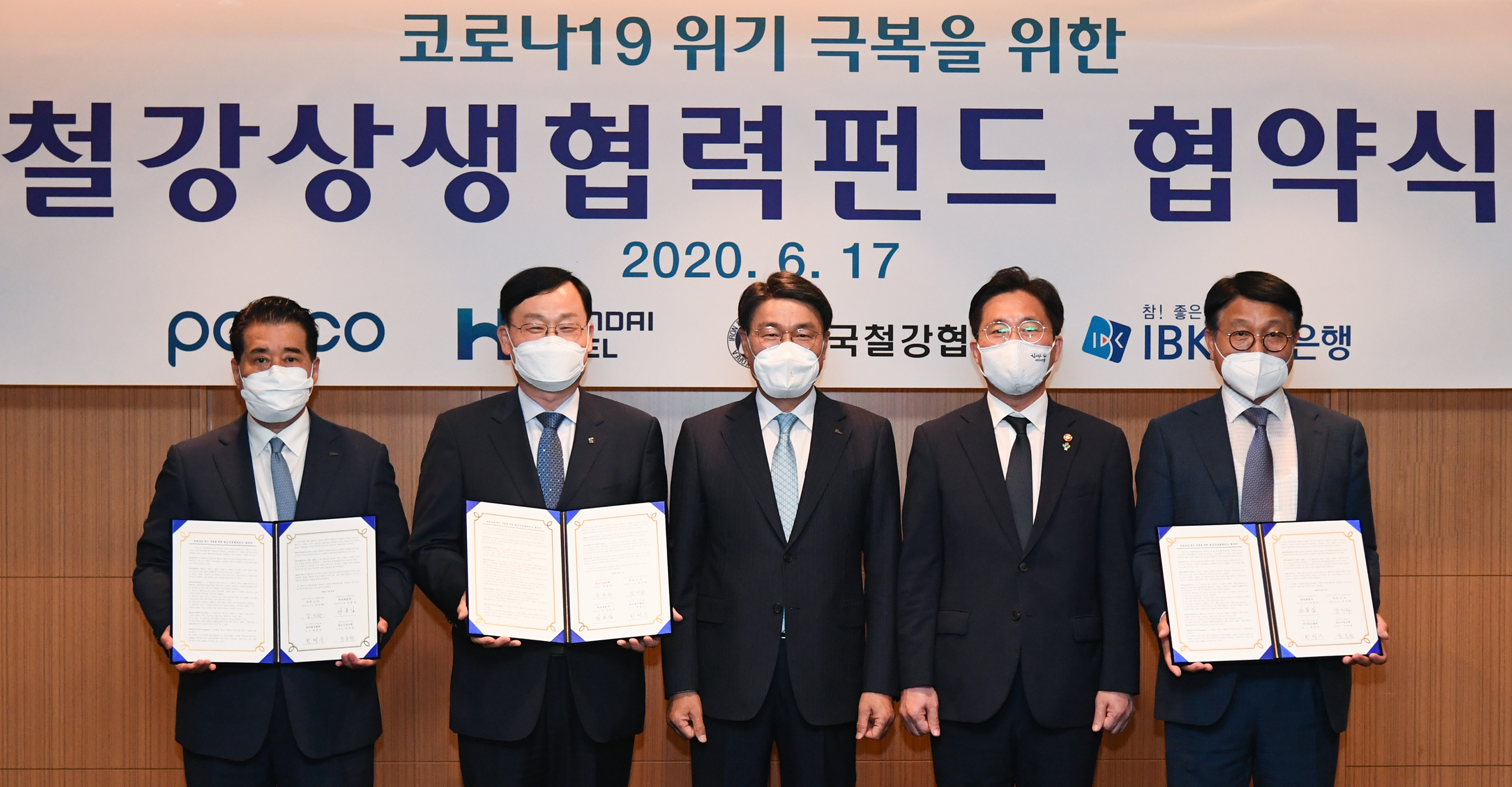 ▲ On June 17, 2020, at the InterContinental Seoul COEX, POSCO, Hyundai Steel, the Korea Iron and Steel Association, and IBK Industrial Bank signed an agreement for the Steel Win-Win Cooperation Fund to overcome the COVID-19 crisis.

The CEO of partner company S said, “While the burden was mounting due to the continued rise in raw material prices from the third quarter of 2020, we received information about the fund from POSCO. It was a welcome and thankful news like a cure for Corona 19. Thanks to the Steel Win-Win Cooperation Fund, we were able to pre-purchase raw materials with KRW 500 million in working capital borrowed at a low interest rate, thereby minimizing the increase in purchase prices.” It has happened,” he said.

In addition, the CEO of partner company K said, “Thanks to POSCO’s support for the Steel Win-Win Cooperation Fund, we were able to lower the interest rate of 4% on a 700 million won loan to 2.9%. It has become like a vitamin for small and medium-sized businesses struggling due to the internal and external stagnation and decline in sales caused by Corona 19.” 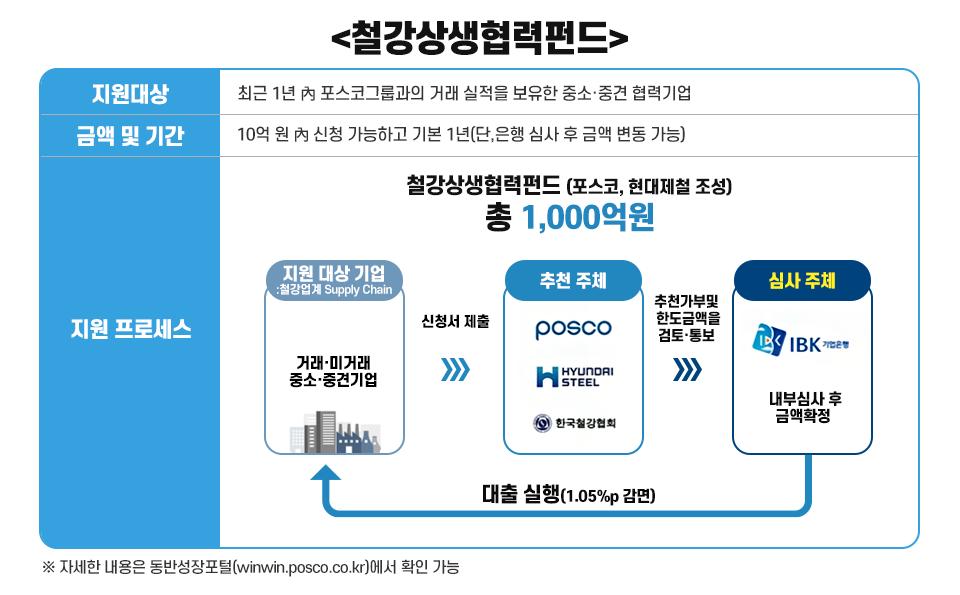 In addition to this, POSCO has operated a number of financial support programs for SMEs. In 2011, an R&D fund was created jointly with the government to support SMEs’ ​​localization and new technology development costs. Since 2017, KRW 50 billion has been loaned to the primary transaction company without interest, and the primary transaction has been financed. There is POSCO, etc., which requires secondary trading companies to pay in cash.

As POSCO took the lead in promoting win-win growth in the industry, POSCO’s major group companies also continued their financial support activities for win-win growth. POSCO International is operating 50 billion KRW for ‘Steel Trade Payment Support’, which pays customers’ payments on behalf of SMEs’ products as collateral. A circle was formed. In addition, group companies such as POSCO Chemical have created and supported the ‘Win-Win Cooperation Fund’ to provide low-interest loans to SMEs.

As such, POSCO started financial support to support SMEs in the early 2000s when the concept of ‘mutual growth’ was unfamiliar, and recently expanded financial support for ESG management at the steel industry level, expanding the target and purpose of support. .

Based on the management philosophy of ‘Corporate Citizenship: Growing Together’, POSCO is always presenting a new paradigm to the domestic industry for shared growth with small and medium-sized partner companies.

Raúl Romero: who is his wife and how did his love story with the Habacilar model begin | Carolina Garcia-Sayan | Peruvian TV | Age | Instagram | Children | show business

Return of the horror game Bonjwa, Amnesia: The Bunker revealed