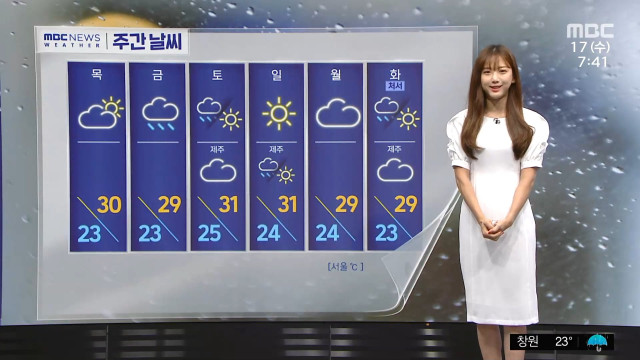 During the night, it rained heavily on the southern coast and Jeju.

More than 200mm of rainfall was recorded on Hallasan Mountain.

Currently, strong rain clouds are receding into the southern seas, and inland areas are often in a state of calm, and the heavy rain warning issued on the coast of the Gyeongnam region has also been lifted.

In the southern region, the influence of the stagnant front is expected to continue a little longer in the future.

In addition, the east coast including Yeongdong is expected to rain today due to the influence of the east wind.

During today’s day, it will rain more than 120mm in the central and northern parts of Yeongdong and Jeju.

There will be showers during the day in central regions including Seoul and inland of Gyeongbuk.

Most of the rain will stop during the day, but it will continue through the night in Yeongdong, the east coast, and Jeju.

Seoul is pointing at 23 degrees.

In the middle of the day, Seoul will be 30 degrees, similar to yesterday.

Rain is in the forecast again for the rest of the country this Friday.

It was the weather.