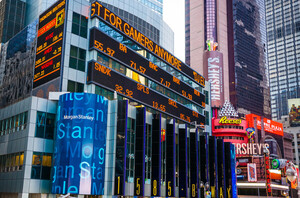 [딜라이트닷넷 정호원 기자] The US stock market, which recently showed a decline in the aftermath of the Chinese corona lockdown, showed a mixed trend ahead of the speech of US Federal Reserve Chairman Jerome Powell.

The issue related to China’s Corona 19 containment, which pressured the New York stock market the day before, seems to have largely resolved the risk as the Chinese government partially eased the containment policy.

On this day, investors are nervous about what kind of hardline remarks Fed Chair Jerome Powell will make in relation to interest rate hikes in a speech at the Brookings Institution on the 30th. The New York stock market fell sharply in August after Chairman Powell poured out hardline hawkish remarks at the Jackson Hole meeting.

The US economic indicators released on the day were sluggish. The seasonally adjusted National Home Price Index for September, compiled by S&P CoreLogic Case-Shiller, fell 1% from the previous month, marking the third consecutive monthly decline. The rate of increase in housing prices in September also increased by 10.6% compared to the same period last year, down from 12.9% in the previous month.

The Consumer Confidence Index for November, compiled by the Conference Board, recorded 100.2, the lowest since last July.

At the New York Mercantile Exchange (NYMEX), West Texas Intermediate (WTI) for delivery in January next year closed at $78.20, up $0.96 (1.24%) from the previous trading day.

The US presents its new stealth bomber: the B-21 Raider