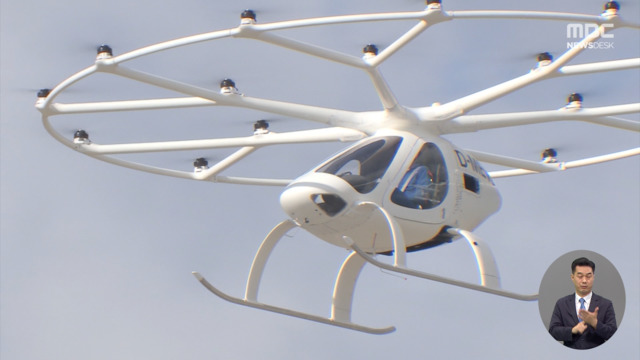 It’s like a drone that carries people, and it flies without any traffic jams, so if you take it from Incheon International Airport, you can reach Jamsil in Seoul in 25 minutes.

This next-generation transportation method was planned to be piloted in Seoul next year and to be commercialized within the term of President Yoon Seok-yeol.

However, as a result of the MBC coverage, it was confirmed that this plan had a big setback.

This is because a sudden change occurred, and the variable was the relocation of the presidential office to Yongsan.

You might wonder what the drone taxis have to do with the relocation of the presidential office, but it’s true.

It is powered by electricity and can take off and land vertically.

It is a next-generation means of transportation that can travel without traffic jams even in the middle of the city.

Large domestic companies have jumped into this project one after another, and the Yun Seok-yeol government has also selected it as a national task.

“With a maximum speed of 320 km/h, we plan to run from Incheon to Jamsil in 25 minutes and from Gimpo to Jamsil in 16 minutes.”

We plan to carry out the first phase demonstration next year in Goheung, Jeollanam-do, and the second phase in the middle of Seoul next year, and then commercialize it three years later.

In September of last year, the route was also revealed.

It connects from Incheon Airport to Cheongnyangni Station via Gimpo Airport and COEX in Gangnam, Seoul.

Terminals are also built in these four places.

But suddenly there was a setback.

On June 3, the Ministry of Land, Infrastructure and Transport gathered representatives from Seoul, Gyeonggi-do, and Incheon, and the route was changed.

The 32km route from Incheon Airport to Gyeyang Techno Valley and the 31km route from Ilsan Kintex to Yeouido via Gimpo Airport are all.

Why did it disappear?

In fact, the Yongsan era began at the same time as the inauguration in May.

As a result, the no-fly zone in Seoul has changed.

The Yongsan Presidential Office and the 3.7km radius of the official residence in Hannam-dong became a no-fly zone.

The entire Han River area, from Mapo Bridge to Seongsu Bridge, was included in the prohibited area.

I had to go on the Han River for safety reasons, but I couldn’t.

The Ministry of Land, Infrastructure and Transport continues to delay the announcement of routes and terminal locations, which were originally scheduled for May.

There is also concern that if Gangnam, Seoul, with the most floating population, is omitted, the purpose of the introduction of urban air transportation will be insignificant.

This is Park Jin-joon from MBC News.