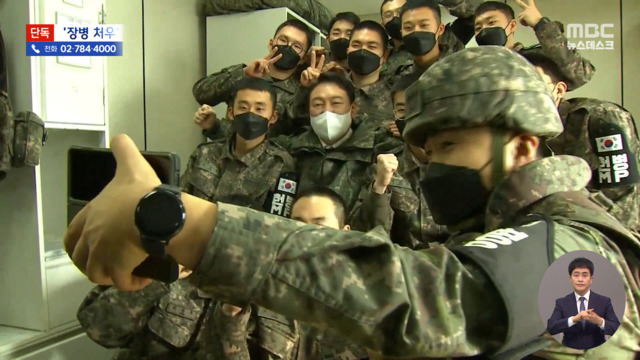 As the cost of the relocation of the presidential office to Yongsan continues to increase, there is constant controversy that the related budget is also increasing.

This time, it was confirmed that the budget allocated to improve the barracks dormitory for military servicemen was diverted to the cost of relocating the presidential office.

This is the exclusive report by Minji Gu.

President Yoon Seok-yeol has been emphasizing the improvement of the treatment of South Korean soldiers.

“I hope that you will pay special attention to creating a barracks environment that will satisfy the soldiers who are dedicated to the country.”

However, in relation to the improvement of the barracks environment, it was confirmed that a portion of the budget allocated for the new design of the military dormitory was diverted for follow-up measures to relocate the presidential office to Yongsan.

Questions related to the budget of the Ministry of National Defense.

It was decided to use an additional 14.3 billion won of the budget originally prepared for other purposes, saying that it is necessary to integrate the defense facilities that were dispersed after the relocation of the presidential office.

However, of this, 680 million won is the budget for the barracks dormitory.

To build a new barracks dormitory, etc., the money raised for the design cost was brought in.

Included in the budget for the design cost for building facilities annexed to the dormitory, such as a catering restaurant and water supply facility, is 1,020 million won, and 710 million won in the budget related to the residence and lodging for executives.

A budget of 2.4 billion won related to the improvement of the soldiers’ life in the barracks was organized for follow-up measures to the relocation of the presidential office.

“I wonder if the relocation of the presidential office was really urgent enough to secretly bring in the welfare budget for the soldiers’ homes.”

Regarding this, the Ministry of National Defense explained, “We decided to divert the remaining budget out of the cost of designing facilities for service improvement projects, etc., in consultation with the Ministry of Strategy and Finance.”

However, he said, “As the budget was set for design purposes, it is judged that there will be no hindrance to the promotion of the residential facility improvement project for soldiers.”

However, if there is any remaining budget related to improving the treatment of soldiers, it is being pointed out that it is appropriate to return it to the national treasury or use it for other purposes for the welfare of the soldiers, or whether it is appropriate to use the budget before the presidential office.

This is Minji Gu from MBC News.

Putin signs a plan to annex four occupied territories in Ukraine… “Are you pressing the nuclear button? Europe tensions”