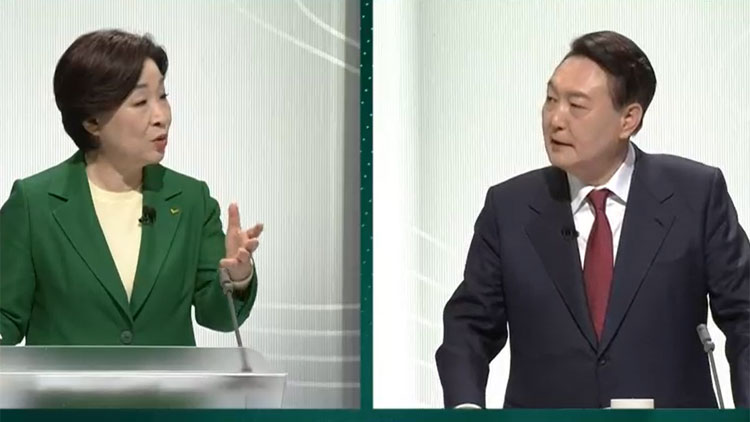 This is the order of looking at the politics of the political department and the presidential election.

Let’s talk about yesterday’s (25th) TV debate. Among the words of Candidate Seok-Yeol Yoon, the ‘Korea-US-Japan military alliance’ part. This has been controversial.

The remarks were made during a speech battle with Justice Party candidate Shim Sang-jung.

That remark became controversial because it was taken in the context of ‘the Japanese military could enter the Korean Peninsula in an emergency’. How should I look?

Yes. Candidate Yoon has revealed the need for additional deployment of THAAD.

The additional deployment of THAAD, along with the US participation in the missile defense system and military cooperation between the US and Japan, is one of China’s ‘three dollar policy’ that the current government has said not to do.

However, Candidate Yoon criticized the current government’s public policy and said that it would be abolished.

Then, when Candidate Sang-Jeong Shim asked if he would participate in the Korea-U.S.-Japan military alliance, or that Japanese intervention is permitted in case of emergency, he said, “I can come in here in case of an emergency, but…”.

Even if it is a family type to say that the Japanese military is coming, it is being accepted very sensitively. How was this topic related to the past conservative governments?

During the Lee Myung-bak administration, there was a controversy over whether or not the Korea-Japan military information protection agreement was handled.

The US and Japan want a triangular alliance to contain China, but the government is expressing it as ‘cooperation’.

Even in the political circles, there were workshops today (26th).

Since the issue of Korea and Japan is an issue with a large ripple effect, both the Democratic Party and the people’s power have raised the level of offensive and defensive power.

On the other hand, People’s Power countered that Yoon’s remarks were not meant to be that way, but that they incite anti-Japanese sentiment.

Please listen to the words of Kwon Young-se, the head of the fleet headquarters.

Among the words of candidate Lee Jae-myung, the mention of the Ukraine crisis became controversial.

This remark also appeared during a TV debate yesterday.

A six-month-old novice politician became president and professed to join NATO and provoked Russia to clash, he said.

It is a word that compares the fact that the Ukrainian president is a political rookie like candidate Yoon Seok-yeol.

Candidate Yoon said that this remark went up in the Anglo-American community, calling it an international disgrace, and that he would apologize to the Ukrainian people on his behalf.

It’s not that Lee Jae-myung didn’t mention Russia’s responsibility, but it seems controversial because he talks about the qualifications of the president of a country that has been invaded. How about the unification part? At yesterday’s debate, the context of Candidates Yoon and Ahn’s remarks was slightly different.

Candidate Yoon’s side is trying to continue.

Candidate Yoon made several phone calls to Candidate Ahn today, but it is said that no contact was reached.