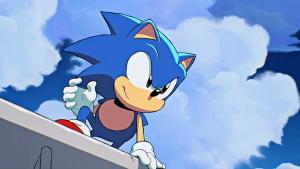 ‘Sonic Origins’, released by Sega Publishing Korea for PC and console game consoles, is a game that includes all four ‘Sonic’ works from the 16-bit Sega Mega Drive era. In particular, it was born again through a complete rework without using an emulator. Thanks to this, you can play in a 16:9 wide screen, which is impossible on an emulator. Of course, you can still play the original game in 4:3 aspect ratio.

In this game, you can enjoy ‘Sonic the Hedgehog’ episodes 1, 2, and 3 and the ‘Sonic the Hedgehog CD’ that was made with a mega CD. configured to be In addition, boss rush mode, mission mode, and mirror mode in which the screen is reversed after clearing the game are also provided.

In particular, in the anniversary mode, the character’s life is unlimited and there is no time limit. Classic mode has the old 4:3 aspect ratio screen and life limit, and there are timeouts and game overs. Therefore, if you want to enjoy the original feel as it is, you can choose the classic mode, and if you want to enjoy the wide screen without actually game over, you can select the anniversary mode. And the game’s graphics don’t change. I used the dot graphics that remind me of the old mega drive days.

The progress of the game is a typical platformer arcade game in side-scrolling. ‘Sonic the Hedgehog’ was originally a character created through an in-house contest to compete against Nintendo’s ‘Super Mario’ series. It was a game that boasted insane speed, a wide stage, and an original worldview, and it was represented by Sega’s mascot and gained explosive popularity.

So, the ‘Sonic the Hedgehog’ series became an arcade game that symbolizes the Mega Drive game machine, with high-speed scrolling that the eye can’t follow, frantic play through jumps, and some puzzle elements.

Children of today may know ‘Sonic’ through movies, but it started out as a rustic and clunky 2D game. The ‘Sonic’ series recently played through PC or console game consoles is enough to make you feel nostalgic for the past. There is joy and fun that cannot be felt in recent games.

In particular, ‘Sonic’ for the mega CD was famous as a game that was difficult to play in Korea because the mega CD itself was expensive at the time of release.

This game, where you can enjoy the classic ‘Sonic’ series once again, will be a great gift for fans of classic games. The only disappointing part is that there are some bugs. Especially ‘Sonic the Hedgehog 3 & Knuckles’. It’s not a serious bug, but there are elements that can interfere with gameplay. Please fix the bug related to Sega.

‘Sonic Origins’ has some disappointing parts, such as bugs and deletion of some content. However, thanks to the re-production, it was reborn as a much cooler game than in the past through a wide screen. In addition, new animations that follow the story of each game have been added.

If you are a fan of the ‘Sonic’ series or are looking for a game that children can enjoy, ‘Sonic Origins’ is a game worth considering.

Less success in maths, the French average down compared to last year: here are the results of the CEB tests

The movie LOL︳It is rumored that Disney has offered a sky-high price of 300 million US dollars to invite the filming of “The King of Thieves”. Johnny Depp responded: False!