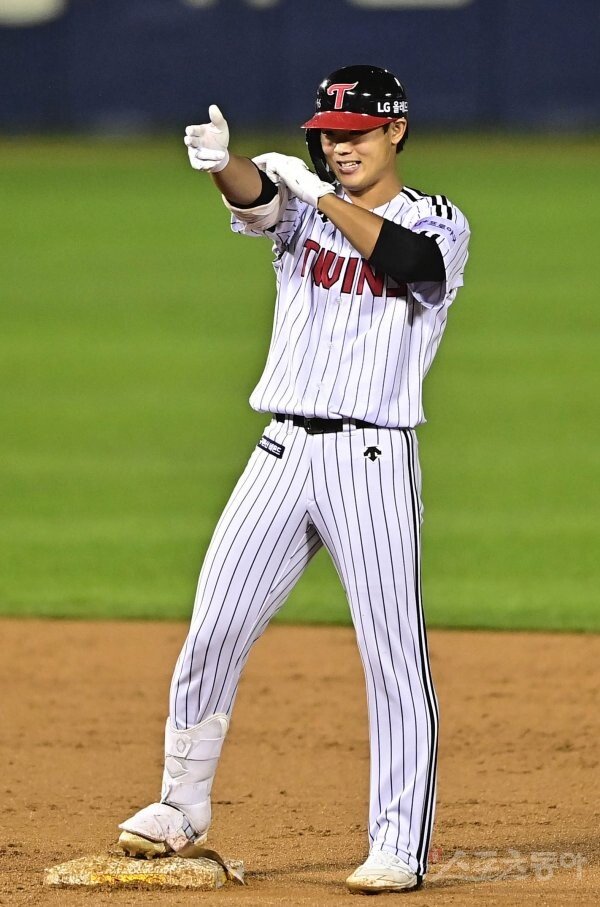 At the ‘2021 Shinhan Bank SOL KBO League’ held at Jamsil Baseball Stadium in Seoul on the 28th, in the match between the LG Twins and the Lotte Giants at the end of the 6th inning, LG Lee Young-bin hit a double with one RBI right and then had a ceremony for the dugout. have. Jamsil | Reporter Joo Hyun-hee [email protected]

A rookie who graduated from high school is unfamiliar with everything. On the professional stage, which is a battlefield, it is important to remove the annual insignia quickly. Nine on-bases made in 16 at-bats as a substitute. At least in terms of guts and concentration, Lee Young-bin (19, LG Twins) has already taken off her youngest tee.

On the 28th, LG won 5-2 against the Jamsil Lotte Giants and ran for three consecutive victories. 3rd place LG succeeded in catching up with 2nd place Samsung Lions, who lost 2-7 to SSG Landers on the same day by 0.5 game difference. Starting pitchers Jae-Jun Bae (3.2 innings, 1 run from a non-response) and Kim Yun-sik (2.1 innings and one run in 2.1 innings) worked together to make 6 innings, and Guo Guo-jin, who came on the pitch, did his best.

LG tied Lotte starter Lee Seung-heon’s balk to Chae Eun-seong’s just-time hit at the end of the first inning, and drew two points first. However, after conceding one point for a mistake in the fourth inning, Chi-Hong Ahn allowed balance with a just-time hit in the fifth inning.

The 2-2 balance didn’t last long. The youngest changed the flow with just one swing. LG created first and third base chances with Oh Ji-hwan’s walk and Kim Min-seong’s hit after one shot in the bottom of the sixth inning. In Moon Bo-kyung’s at-bat, manager Ryu Ji-hyun’s choice was pinch hitter Lee Young-bin. Lee Young-bin made a right-handed double by hitting Kim Do-gyu’s fork ball (134 km) in the ball count 2B-2S. While right fielder Son Ah-seop traced the ball, Oh Ji-hwan as well as Kim Min-seong stepped into the groove with ease. After Lee Young-bin stepped on second base, he was immediately replaced by Kim Yong-ui, the runner-up, and LG ran away one more point when Yoo Gang-nam hit the right time. The game was decided by the swing of the high school rookies.

There were many reasons for putting a rookie in the game. Lee Young-bin recorded a batting average of 0.462 (6 hits in 13 at-bats) and 3 walks in 16 at-bats, including this season, as a substitute. That’s more than half of it. His first hit of his debut came on May 8 against the Jamsil Hanwha Eagles, which he also made as a pinch hit. On June 11, he made a pinch walk in the bottom of the 8th inning against the Jamsil Doosan Bears 1-1 against the Jamsil Bears, proving that there was no big problem in the match. Considering that veteran hitters who have been pros for over 10 years agree, “It’s never easy to be on the bench throughout the game and then go out as a substitute from a chance to make a hit.”

After breaking the balance of the 2-2 match, it was Lee Young-bin’s responsibility to hit the final. It’s already the 4th final hit this season. If you look only at the visible numbers, it is less than the built-in seniors such as Kim Hyun-soo (14) and Yoo Gang-nam (11), but considering the achievements made in 74 at-bats in 44 games this season, it cannot be ignored. Considering that Lee Young-bin is a rookie who joined this year, his guts stand out even more. LG is ranked first in batting average (0.284) this season, but Lee Young-bin’s stake is not small.

Concentration and guts that are unmatched by other veterans. Lee Young-bin is growing into such a full-fledged professional player.