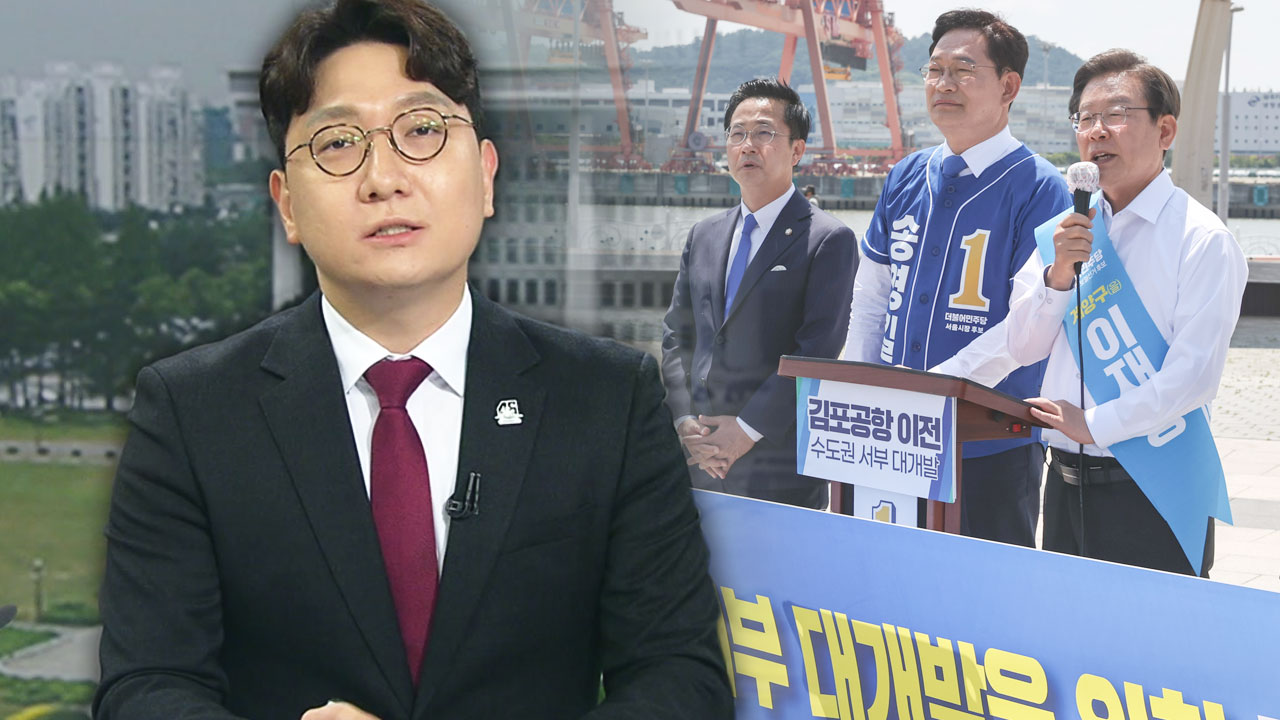 * The text below may differ from the actual broadcast, so please check the broadcast for more accurate content.

After talking about Gimpo Airport, there was talk of vertical take-off and landing. What do you think about the relocation of Gimpo Airport?

I’ll just mention one thing Spokesperson Seo just said and let me tell you about the airport, it’s Yoon Seok-yeol, then-candidate. The conflict with CEO Jun-seok Lee and the current conflict are different in two ways. The first is temporal.

It was a matter of vision and philosophy, and now the 586th generation renunciation seems to be a literal battle for power. Let me tell you that these two are different. I actually have a lot to say about the airport, but I have to take issue with Lee Jae-myung’s credibility as a politician.

Because, in fact, candidate Lee Jae-myung insisted for 10 years that he would receive a basic income while being evaluated as a national leader in the presidential election, but at the end of the day, he said he would not do it because the evaluation of basic income was not good, and he said, “I am a flexible leader.”

It was already filmed here because the public had seen it all, and there were a lot of parts that made up the whole economy with words such as key currency, which came out with a really erratic concept. Even in the case of Candidate Song Young-gil, I will break up with the tax policy now, while all of a sudden, the real estate policy tax has made the people unable to live. .

Then, in this regard, they have to apologize for what they have done wrong in the past and change their position. The same goes for airports. Candidate Jae-myung Lee, speaking of his promise to Gangseo-gu in the presidential election just three months ago, said that he would expand Gimpo Airport and develop it further. Candidates… I was surprised.

It is good to go to Jeju Island by KTX by digging an undersea tunnel underground. You can make such a promise. Candidate Heo Kyung-young is also submitted, so I can submit all of them. too reckless And it’s not responsible politics. I see it like this.

There was even talk of candidate Huh Kyung-young.

Candidate Heo Kyung-young seems a little different. There is a part of this that is a bit general in the political realm, but there is also a part of imagination. So, there are many aspects of policy that are realized from imagination and from there into reality.

So the locals were very demanding about it. There was a request that I would like to relocate, and even last year. Perhaps the Incheon City Council People’s Strength Councilor relocated to Gimpo Airport and moved to Incheon Airport.

So, in this regard, making this promise is to present a plausible promise to the local people and voters in order to be chosen as a leader who can take responsibility for this western region, and by this, Jeju Islanders are relatively harming us. You’re making a complaint to Candidate Young-Hoon Oh because you said he’s coming, and you shouldn’t do this.

Therefore, there may be differences of opinion on these aspects between regions. So there are some things I regret with this… As soon as CEO Jun-seok Lee received it, he went straight to Jeju Island. You go and start agitating the Jeju people. It’s splitting. If there is Gimpo Airport here, the Jeju people will perish. You shouldn’t do this.

It’s an election, so it’s understandable, but in the end, even if it was Lee Jae-myung, a local candidate, it would be a member of the National Assembly, and Song Young-gil would become the mayor of Seoul. This is the policy they set.

So, policy proposals can be made, but the realization is what the current government does. So, it’s a promise that satisfies the demand for those voters, but don’t make this promise either. Isn’t this a bit excessive?

What do you think?

In fact, I think the Democratic Party was twisted from the beginning. Probably because he lost by 0.7%, he thinks he wrote this board saying that if candidate Lee Jae-myung starts and creates a boom, he can make a comeback. That’s where the misjudgment begins.

Candidate Song Young-gil’s undersea tunnel… I said it was a promise like Candidate Huh Kyung-young, but I think it can be done. It is said that promises are the realm of imagination. But I don’t understand how the mayor of Seoul can break through this.

Literally, I don’t understand how the head of a metropolitan government and the person running Seoul plan to drill the undersea tunnel to Jeju Island by the head of the local government.
Then you have to go to the general election. You just mentioned local selfishness, but that is the problem and limitation of our politics. I think that’s good enough.

However, expectations are different for Candidate Jae-myung Lee. President Zul-Shin, who promised to run the entire Republic of Korea, goes to one region and makes a selfish promise for that region? Can the people recognize this as a leader’s arms?

And one more thing is that this is now getting twisted even within the party. A certain Democratic Party candidate in Dongtan will also expand the route from Dongtan to Gimpo Airport. In Jeju Island, the Democratic Party is wrong again now, and then suddenly, Minister of Land, Infrastructure and Transport Won Hee-ryong reveals that he is not doing it. Or, CEO Jun-seok Lee should resign. Jung-gu heating is coming out like this.

Then I see it as similar to the privatization debate. We didn’t even say that we were doing privatization, and we didn’t say anything, but they suddenly assumed that we were going to privatize and attacked our people.

No one has ever talked about the airport issue in the People’s Power, but after they said they would move, they suddenly shifted the blame to Minister Won Hee-ryong and CEO Lee Jun-seok told him to resign. How should the public accept this? So, I like the last promise as a promise.

It’s too rushed, and about moving the air system to the country, you have to look at the whole system of the country, but the depth of thought is too thin. However, there is a problem with criticism about how a person who even served as a presidential candidate of the Republic of Korea can campaign like that in the National Assembly election.

You’re running for Gyeyang-eul now, aren’t you a presidential candidate? Then, in order to impress the voters who vote for you, each region has a regional pledge. And you talked about the undersea tunnel part, but that is, the undersea tunnel parts have been reviewed without the Jeollanam-do, the last government, the last government, the ruling and opposition parties, conservatives, and progressives.

At that time, however, the people of Jeju-do were against it. Because drilling an undersea tunnel becomes too much of a daily living area, so the lodging industry itself will die. With these aspects taken into account, there are some parts that have been planned, but have not been implemented. The same goes for Gimpo Airport.

First of all, the promise is thrown in order to win votes from the voters in the region and the western belt, and the promise is harmful to the people of Jeju Island and direct parties. Then, it is a simple matter for the government to decide whether to proceed or not by collecting those opinions.

However, since this is an election, CEO Lee Jun-seok wants to split, and that is why we are talking about various things to defend ourselves. It can be done, I think.

The last thing I want to say is that everything is good. To that end, candidate Lee Jae-myung is talking about the opposite of the promise he made then because he ran for president three months ago.

Then, at least make a national apology for that, and then go to Gyeyang and talk about the local worker theory, and I will relocate the airport for regional development.

Just looking at the election engineering, anyway, this issue became the biggest issue in the last minute before the election. Do you think that this is effective for Incheon Gyeyang and then the western part of Seoul and votes from this side?

I don’t know the effect. However, if I were to tell you about some of the regrettable parts of the promise to relocate to Gimpo Airport, I think there would have been a lot more appeal if there had been something to be done there.

After relocating to Gimpo Airport, I had to say that I would build 600,000 public housing units there or create a valley there.

So, the part that Lee Jun-seok went into a split right away without missing out on this loop is a bit disappointing for us, but I am. The problem of relocating Gimpo Airport came out within a few days. So, I don’t think it will have a negative impact on the votes or a net effect on the votes.

CHILDREN STRIPPED OF THEIR CHILDHOOD