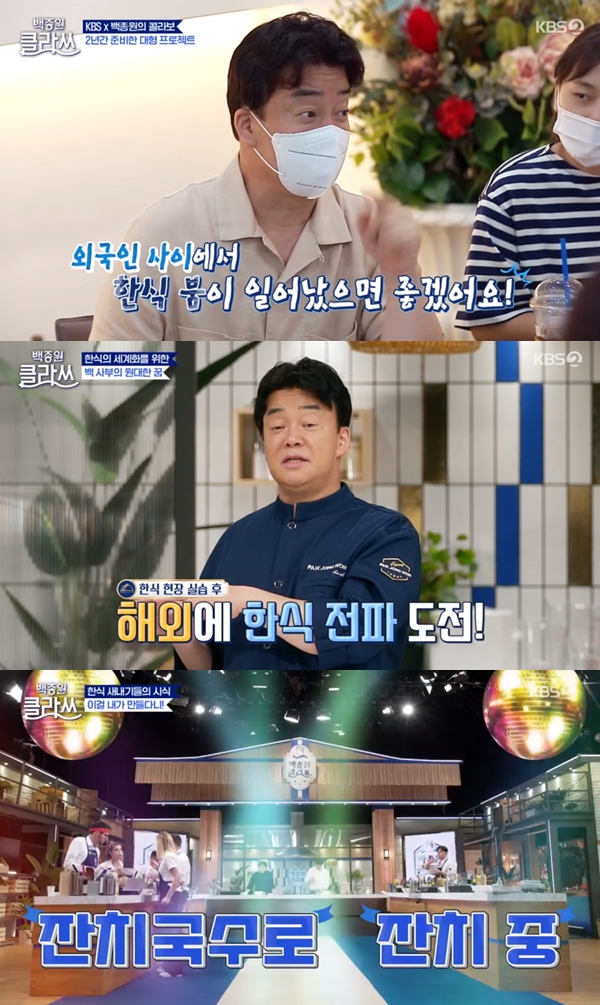 In KBS2’s ‘Baek Jong-won Class’, which was first broadcast on the 28th, Baek Jong-won and Sung Si-kyung appeared and presented various Korean dishes.

Baek Jong-won called the production team from the beginning. He said, “Isn’t it a K-pop craze like BTS and Seventeen all over the world right now? We only put spoons on it,” he said.

Soon, 6 new Korean food foreigners appeared and started cooking with Baek Jong-won and Sung Si-kyung. The theme of the first broadcast was ‘Feast Noodles’. Baek Jong-won said, “Janchi-guksu is a traditional Korean food that is eaten on special days. I decided to choose banquet noodles in the sense that I want this broadcast to last a long time.”

Each of the six newcomers to Korean cuisine began to explain their country’s noodle dishes. Each country has a variety of noodle dishes, attracting attention. In particular, the chef from Italy said, “There are more than 300 pastas in our country.”

The six newcomers began to trim the materials. Onions, carrots, and pumpkins were adjusted to length and shredded. In the midst of this, Baek Jong-won showed the Chungcheong-do dialect by saying ‘length’ to ‘gireokji’, and Sung Si-kyung pointed it out, causing laughter.

I thought it would take an hour and a half to finish the material, but there were still eggs left. The performers separated the egg whites and yolks and began to unpack the eggs. The cooking continued, and the broth only started to come out after 4 hours of recording.

The six newcomers each started to boil their own broth. In particular, the Italian chef is preparing to bake bread separately, raising expectations. Baek Jong-won said, “If the meat is thick, you can add more water. Now that I use thin meat, I can use less water,” he coached the students.

Finally, the feast noodles were completed. In the meantime, Italian chef Fabry made a feast of noodles with his own characteristics and focused his attention.