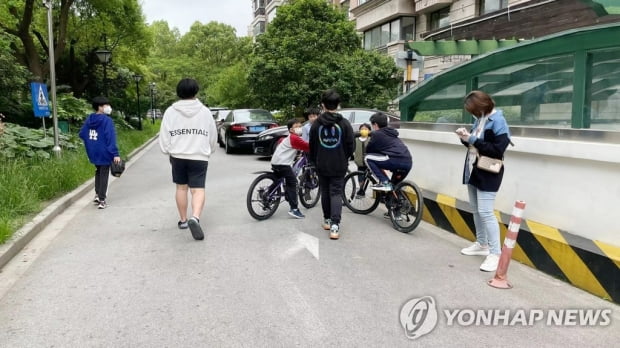 On the 29th, the 33rd day of lockdown, the first realization of ‘social protection zero corona’
Earlier, Shanghai city announced that limited activities were allowed in areas that achieved zero social immunity.

As Shanghai, China realizes the ‘social side of the corona virus’, it is expected that some of the city blockades that have lasted for more than a month will be lifted.

The social-immunity-free corona is a Chinese quarantine term that refers to a state in which there are no new infections outside the quarantine control area.

Citing statistics from the National Sanitation and Health Commission of China, the Health Times under the People’s Daily, an official newspaper of the Communist Party of China, reported that the number of new infections in Shanghai on the 29th was 11,181 (including 8,932 asymptomatic infections), classified as asymptomatic, and then re-identified as symptomatic. The actual number of new infections, excluding cases that were classified and counted, was 9,196.

The Health Times emphasized, “The actual number of new infections, 9,196, all occurred within the quarantine management control zone,” and emphasized that “This means that Shanghai has achieved social immunity from Corona.”

Fang Bangjiang, a professor at Shanghai Medical University, who is in charge of the operation of the quarantine hospital at the Shanghai Haixin International Expo Center, also said, “All 11,181 new infections in Shanghai on the 29th were found under quarantine management. did it,” the state-run news agency Shinhwa reported.

The Health Times reported that the number of infected people in non-isolated and controlled areas has decreased rapidly.

“The number of new infections has turned to a decreasing trend, and the number of infections outside the quarantine control area has decreased sharply from the 23rd to 0 on the 29th,” said Fang.

He said, “Under the guidance of the central government supervisory team, we repeated the mesh test several times.” “The latest figures came out after medical staff gathered from all over the country concentrated their capabilities on the PCR test without any blind spots.” said.

Earlier, the city of Shanghai announced at a press conference on the 27th that it would implement ‘limited number of people, limited area, limited activities’ in areas that have achieved ‘social immunity zero corona’.

He added that by the 30th, he plans to conduct a full test by combining antigen test and PCR test, and then decide whether or not to open the door on a limited basis according to the test results.

Shanghai, with a population of 25 million, has been under lockdown for the 34th day from the 28th to the 30th of last month as the number of people infected with COVID-19 continues.

After the lockdown, the number of new infections soared to the 27,000 level on April 13, and has been gradually decreasing, but it is still maintaining around 10,000.

However, the city of Shanghai has proposed a ‘social immunity zero corona’ as a prerequisite for easing the lockdown amid growing complaints from citizens, such as food shortages due to the city lockdown.

The Chinese economy is facing a crisis as the supply chain and logistics system around the Changjiang Delta, centered on Shanghai, the ‘economic capital’, which accounts for about 3.8% of China’s total gross domestic product (GDP), are paralyzed.

The Changjiang Delta accounts for 25% of the country’s total economy.

Guardiola: I enjoy the atmosphere at Elland Road, we must win to win the title – yqqlm