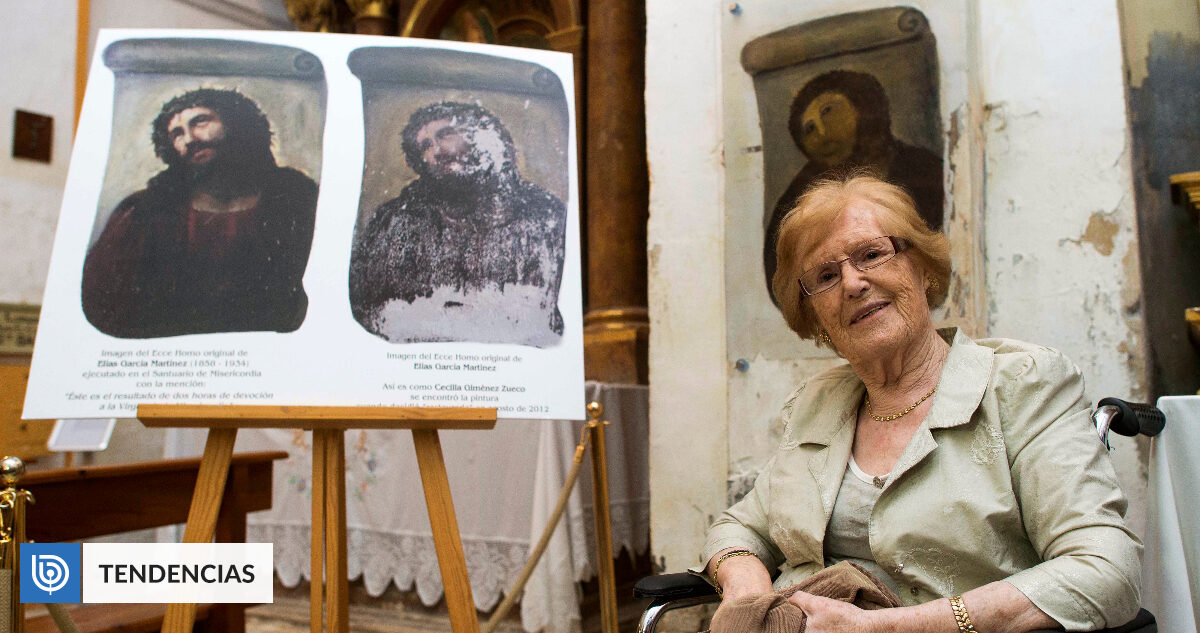 A decade has passed since an old woman from Borja, in Spain, tried to restore the well-known “Ecce Homo”, the emblematic painting that adorned the town’s church.

The restoration caused a stir, not only in the city, but also worldwide, since its quality was far below the original painting.

The mural, originally made by Elías García Martínez in the Santuario de la Misericordia de Borja (Zaragoza), dates from the beginning of the 20th century and was ruined by the woman who, with the best of intentions, tried to restore it due to the damage it had sustained with the Over the years.

The action caused the image of Ecce Homo to become a meme and go through all social networks, as well as being news in the most important media in Spain and the world, including BioBioChile.

But, what happened in these 10 years, how did it affect Borja that the painting of his church became famous worldwide and how is Cecilia Giménez, the author of the restoration? Those are questions we answer below.

The history of Ecce Homo

To understand what Ecce Homo is, you have to travel several decades in history, specifically until 1930 when Spain was experiencing a time of poverty, pain and Christianity, he points out. Infobae.

It was in these years that Elías García Martínez, a discreet Spanish painter who also worked as a teacher and classical portraitist, was commissioned to create a mural in the Santuario de Misericordia de Borja.

García, who made the portrait commissioned by the local authorities, captured the “Ecce Homo” while on vacation in the area, leaving a Renaissance-style mural stating: “This is the result of two hours of devotion to the Virgin of Mercy”.

According to what was reported Infobaethe piece of oil on plaster, 60×40 cm, was not technically original, it was a representation of Jesus quite similar to one that Guido Reni, an Italian, had done a couple of centuries ago.

However, that was not a problem, since the Christian figure was in the place, so the objective of the ecclesiastical authorities was done.

To a restoration of fame

Although the image of Jesus was reflected in the murals of the Sanctuary with great faith and devotion, it was not made with the correct materials for a mural, which caused it to simply deteriorate over the years.

And that is when Cecilia Giménez appears in the story, an 81-year-old woman who helped with the maintenance tasks of the Sanctuary and had some knowledge of painting, which she had applied in the previous restoration of a canvas of the Virgen del Carmen in the Convent of Santa Clara in the same city.

Cecilia, a woman of very good will, offered to restore Garcia’s “Ecce Homo” and in the process of work, things did not work out so well. In this way the painting was born that is cataloged as “The worst restoration in history”.

“A very well-intentioned neighbor decided, at her own risk, to restore the fresco that, in reality, was in poor condition as a result of the humidity of the temple,” said Juan María Ojeda, Borja’s councilor for culture, in an interview with ABC Radio Point.

Cecilia never finished her work, since she went on vacation, but by the time the image of “Ecce Homo” or “Ecce Mono” returned, as they put it in different places, she had already become famous worldwide.

The story of the restoration appeared in the main newspapers in Spain and then the whole world echoed the news. Twitter was one of the main social networks where the “Ecce Homo” phenomenon went viral.

The reason, the work that Elías García Martínez carried out with such devotion was destroyed with the restoration by Cecilia, who left a stain on the work.

Tourism success thanks to Ecce Homo

The return to the world of the image of Ecce Homo made it a mockery worldwide, but a mockery that the people of Borja in Spain knew how to capitalize on.

According to data from The VanguardTourist visits to the city tripled, which profoundly helped the economy of a town of only 5,000 inhabitants.

What Cecilia did managed to put Borja as a must-see tourist scene for those who visit the Zaragoza area, in Spain.

This meant that since 2012, more than 300,000 people from 110 different countries have visited the Mercy Shrine to see the painting.

Eduardo Ardilla, mayor of Borja, told The vanguard “The fact that we have managed to convert a social phenomenon into a social goal. Thanks to the 40,000 euros per year that we obtain from the sale of tickets (at three euros) we have been able to hire two people who carry out guided tours of the venue, we cover the costs of electricity and security and we provide a scholarship for the stay at the residence of the Sancti Foundation Spirits of two people from the village with few resources”.

Cecilia became famous worldwide and still is, at 91 years old, for the art she made in her city, Borja.

The old woman gave various interviews during the Ecce Homo boom era, where she revealed her skills as an artist.

He painted for a long time, had exhibitions and even sold his art, which was very different from what he did with “Ecce Homo”, although it should be clarified that it was not complete by the time he became famous.

Ten years after the world knew her, Cecilia continues to live in Borja, although things have changed for her. She currently moves in a wheelchair and with her age, she has lost some senses, as well as her memory on some occasions, she recorded. Idealthe Spanish medium with which he interviewed.

At the beginning of the whole boom of “Ecce Homo”, Cecilia did not have a good time, there was a dispute with the author’s family, problems over rights and media pressure that she never imagined. However, her unfinished work became famous and with that, came a reward for all the merchandising that was done for her.

He currently has 49% of the image rights of his work, he renounced half, for which he receives benefits for everything that is done with the image of Ecce Homo, from key rings to t-shirts. Although part of that money is still donated to the Sancti Spíritus Foundation.

However, despite all her fame, she is still an old woman who lives with her son Juan in Borja. She keeps a “little apartment” with her art in her house and whenever she can, she goes to the Sanctuary with her son for coffee.