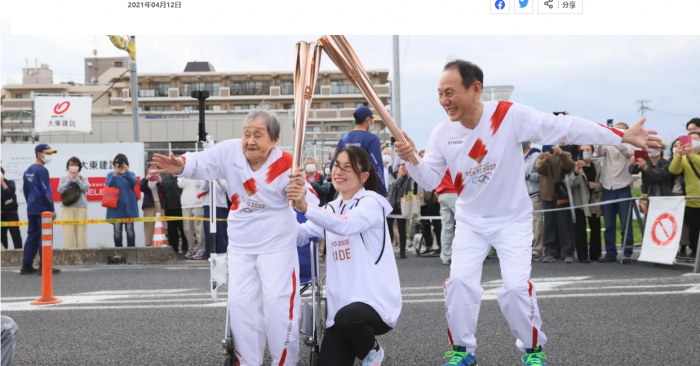 The Tokyo Olympic torch passed on the 12th in the ancient city of Nara. A 109-year-old woman completed the relay in a wheelchair, setting the world record for the oldest person to participate in the Olympic torch relay.

In 2016, 106-year-old Brazilian Ida Remango participated in the Rio Olympic torch relay, setting the record for the oldest Olympic torch bearer. This record was set by the 109-year-old Shizuko Kagawa that day.

Shiko Kagawa’s participation attracted a large audience, and she was pushed by her granddaughter to the torch junction. Shizuko Kagawa looked very energetic. When handing over the torch, she got up from the wheelchair and held the torch in both hands to ignite the torch. Sitting in a wheelchair, she smiled and waved frequently to the audience on the roadside until she had walked the entire 200-meter distance.

According to reports, Shizuko Kagawa was an obstetrician and gynecologist who was born in 1911 and has experienced countless turbulent years. She said: “After the torch relay is a dream come true.”

Shizuko Kagawa is also the second person over a hundred years old to participate in the relay since the torch relay began on March 25. However, according to the plan, she is not the oldest. Earlier Japanese media reported that the 118-year-old female Riko Tanaka, certified by the Guinness World Records as the “oldest living person in the world”, will participate in the torch relay in May. If she can complete the relay in Fukuoka, she will create a new world. Record.

The Olympic torch relay will move to Osaka on the 13th and 14th. Affected by the epidemic, all relays in Osaka will be held behind closed doors in the city’s Expo’70 Commemorative Park, and spectators will not be allowed to enter.