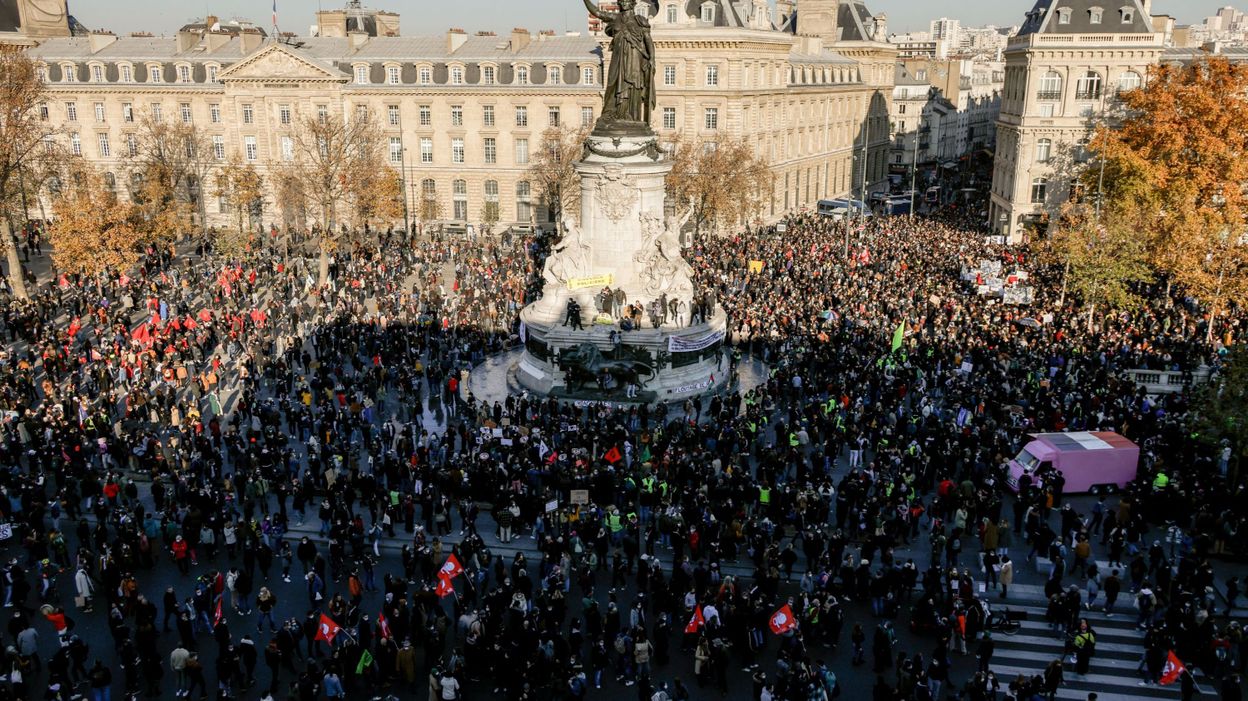 The demonstrators marched this Saturday in France against the text of the law “global security” and its flagship measure, which plans to restrict the possibility of filming the police, but also against police violence and racism.

“Let us film, let us breathe”

Numerous gatherings were held all over France, against this text deemed infringing “freedom of expression” and “the rule of law” by its opponents.

Several thousand people, 6,000 according to the prefecture, demonstrated in the city center of Bordeaux against the “global security” law, the most important demonstration in this city since the “yellow vests” crisis, noted journalists from the AFP.

“Your weapons, our cameras”, “I am Michel Zecler”, “Let us film, let us breathe”, “welcome to the planet silent” or “Blur kills”, could we read on the signs in the procession, on which flew the flags of many leftist organizations.

In Montpellier (south), there were 4 to 5000, waving placards proclaiming “More cops than doctors – sense of priorities” or “Blurred democracy”. In Rennes (west), Maud, 45, was there to protest against this “real democratic denial” and the “authoritarian drift.

Some tensions in Paris

Clashes between groups of demonstrators and the police continued at the end of the day on the Place de la Bastille, where several fire starts took place, noted an AFP journalist.

Around 5.30 p.m., a newspaper kiosk, the entrance to a Bank of France building and an adjacent brewery were set on fire, requiring the intervention of firefighters. Around, groups of very mobile demonstrators and all in black throw projectiles of all kinds at the police who respond with tear gas, according to the AFP journalist.

Several injured protesters, including a woman at the head, were taken in charge by other protesters or street medics teams, another AFP journalist noted.

These gatherings have been dubbed “marches of freedom” and take place in a politically tense context following several cases of police violence.

In this tense context, Emmanuel Macron descended this Friday in the arena to denounce the “unacceptable aggression” of producer Michel Zecler and “images that make us ashamed”. He again asked the government to quickly make proposals “to fight more effectively against all forms of discrimination”.

In this tense context, Emmanuel Macron descended this Friday in the arena to denounce the “unacceptable aggression” of producer Michel Zecler and “images that make us ashamed”. He again asked the government to quickly make proposals “to fight more effectively against all forms of discrimination”.

What would happen if the police could no longer be filmed, question the detractors of the “comprehensive security” law, who fear the scope of its article 24, penalizing those who would like to film the police with malicious intent.

After modifying the text to include guarantees on the “right to inform”, the government spent the week trying to clear the matter.

►►► Read also: Between attack on press freedom and fear of police violence, the “global security” law is debated

In vain: despite its adoption at first reading by the National Assembly, the controversy was such that Matignon resolved to announce a new rewrite of the text by an independent “commission”. Before backpedaling in the face of the ire of parliamentarians and the majority, to whom Jean Castex had to assure that they would have the last word.

Under pressure, the executive will assess Saturday to what extent this law can unite against him.

In Paris, the head of the protest, two demonstrations were declared to protest against this text, which also provides for the possible use of drones during demonstrations.

The prefect’s words to law enforcement

The Paris police prefect, Didier Lallement, asked the police under his authority to keep “the republican line to the end”, in a letter addressed to each of them, before new demonstrations Saturday against police violence.

“To deviate from the republican line which serves as a guide, this line which has illuminated the footsteps of our elders in the darkness of history, is to deny what we are, it is to undermine the pact of confidence that unites us to our fellow citizens, it means losing the sense of our mission “, writes the prefect in this letter which AFP has read.

Emphasizing “expect each (of them) to hold the line until the end“, he adds :”the requirement that I place in you, I also impose it on myself “.

While the beating by police officers of a black music producer in his Parisian studio, raised a wave of indignation, the prefect said he could “count on probity, a sense of honor and ethics” police officers.

This beating was made public through the dissemination of a video on social networks.

“In the next few days, the next weeks […] there is no doubt that you will be confronted with difficulty, with doubts, even with anger or fear. “” I know however that you will realize yourselves, as men and women of character “, concludes Alain Lallement.

“An obstacle to the freedom to inform”

In a column, published this afternoon by several French media editors, including that of franceinfo, many news directors and newscasters join the protesters in calling for “the institutions renounce agreements that infringe press rights.”

They denounce “new obstacles to the freedom to inform”. According to these journalists, “the attempts to control our shoots by the public authorities (police, justice, penitentiary administration, gendarmerie in particular) have never been so urgent.”