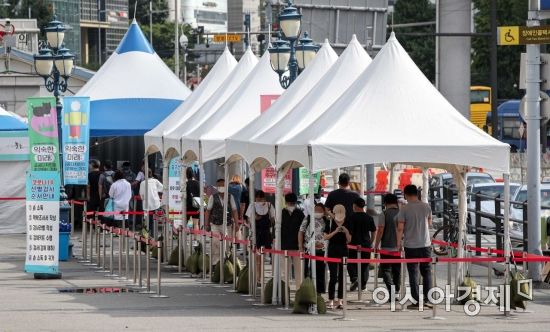 Citizens who visited the temporary screening test center in Seoul Station Square on the 4th, when there were 1,725 ​​new confirmed cases of Corona 19 and returned to 1,700 in five days, are waiting to be tested. / Reporter Kang Jin-hyeong [email protected]

[아시아경제 이관주 기자] As the ‘fourth pandemic’ of COVID-19 in Korea did not subside, the number of confirmed cases continued across the country on the 4th.

According to the quarantine authorities and local governments such as Seoul, there were 1,649 new confirmed cases of COVID-19 from 00:00 to 9pm on the same day. This is 84 more than the 1565 counted at the same time the day before.

There is still time until midnight when the counting ends, so the number of new confirmed cases to be announced as of 00:00 on the 5th is expected to be in the late 1700s to 1800s.

The ‘fourth pandemic’, which started in the metropolitan area at the beginning of last month, has recently spread to non-metropolitan areas and has grown into a nationwide fashion. The number of daily confirmed cases has been in the four digits since the 7th of last month (1212 people) for the 29th day.