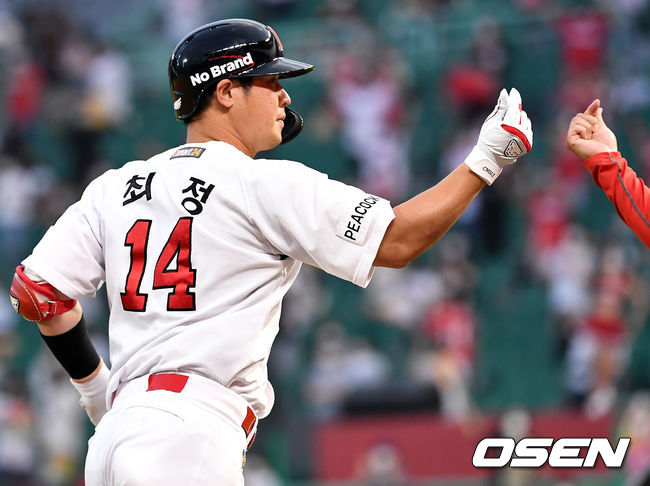 [OSEN=인천, 홍지수 기자] “I have no greed for the home run king.” SSG Landers ‘signboard hitter’ Choi Jeong (34) repeatedly said that he has no desire to win the home run.

Choi Jeong-eun contributed to the team’s 10-3 victory by setting a 20-home run record for the fourth time in KBO history in Game 6 of the season against Samsung Lions in the ‘2021 Shinhan Bank SOL KBO League’ held at SSG Landers Field in Incheon on the 29th.

Choi’s home run record came in the bottom of the 4th inning when the team was chasing 1-2. Choi Jeong-eun, who entered the plate as the lead batter, succeeded in attacking Samsung’s Choi Chae-heung’s 4th pitch slider and hit a solo home run.

However, after the game, Choi Jeong-eun said, “I was not conscious of the 20-home run record for six years in a row. I knew it when I saw it on the billboard,” he said. Choi Jung-eun, who showed a feeling of hitting with a batting average of 41, 1 pen, 9 li in the last 10 games up to that day against Samsung, just liked it by saying, “The hitting condition seems to have improved since the away from Changwon.”

“Since camp, I practiced talking with coach Jinyoung Lee. ‘Let’s just hit the good ball’. Choi Jeong-eun, who said, “I practiced a lot to pick only the best balls to hit.” He is aiming for a batting average of 30% or more, which is set as a standard for hitting well. We are also paying attention to OPS. Another story that came out of the mouth of a player who thought the home run king was his goal, he has a reason to think.

Choi Jeong-eun said, “It would be an honorable record,” with the record of leaving 12 to 400 homers, the second in KBO history after Seung-yeop Lee and 20 homers for six consecutive years. “I hold the bat short and hit a lot of hits in every game with a blow that can get out of the center. I’m just trying to make the days feel good. I wish the batting rate was high. Even if I hit a lot of home runs, I hit 40 or 50. But the hit goes beyond that. That means there are more possibilities to help the team,” he explained, explaining why he is not greedy for the home run king.