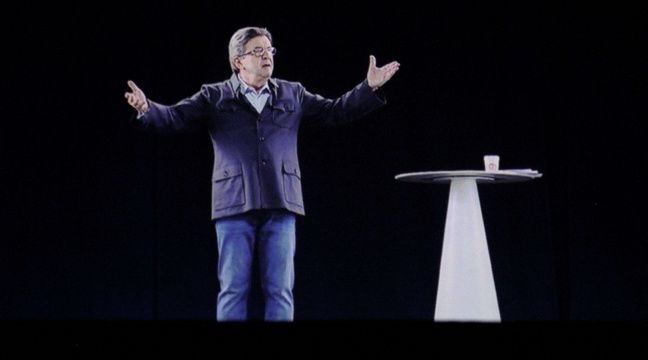 Watch out for the eyes… and the nostrils. “Cube” of giant screens, diffusion of images in 360 °, and even of smells: the campaign team of the Insoumis Jean-Luc Mélenchon presented Wednesday the device of his first big meeting of 2022, the 16 January at the Nantes exhibition center, intended to be “immersive”. “In a hall, we are going to build a structure that can hold 3,000 people, a sort of cube 50 meters wide and six meters high, all of the walls of which will be screens on which 16 video projectors will project images in [définition] 28K ”, described the LFI deputy Bastien Lachaud during a press conference. From
FFP2 masks will be distributed to participants.

“To this will be added 96 m2 of LED panels on the ceiling which will complete the immersion”, he indicated, “to immerse the spectators in different universes linked to the themes of the speech” by Jean-Luc Mélenchon, who will be in “In the center, on a central stage”. “The visual stimuli will be accompanied by a spatialized sound” and “natural scents” diffused in the room “as the speech progresses” in order to “project both our candidate and our ideas into the future we want. as progressive and positive as possible, ”also argued Bastien Lachaud. For rebellious deputy Clémentine Autain, “thanks to this innovative and modern technology”, the 3,000 supporters of Mélenchon will be able “to feel emotions and our project of the world after”.

The return of holograms

In the first part of this meeting, which will begin at 2 p.m., fragments of philosophical, political, literary texts and poems will be read by members of Parliament and of the Popular Union. Then Jean-Luc Mélenchon will intervene to “repeat the main lines of his campaign”, explained Clémentine Autain to the press. The candidate has already used innovative technologies to campaign: in November 2020, he held his first meeting in augmented reality after having held a meeting in holograms during his presidential campaign in 2017.

The holograms will also be used again during a gathering scheduled for April 5 which could “be held simultaneously in seven large regions”, also announced Bastien Lachaud. Before that, Mélenchon will hold two other meetings in January: the 19th in Strasbourg and the 24th in Bordeaux.

The cultural choices of the “Point”: dancers in dresses or a singer with a stove?