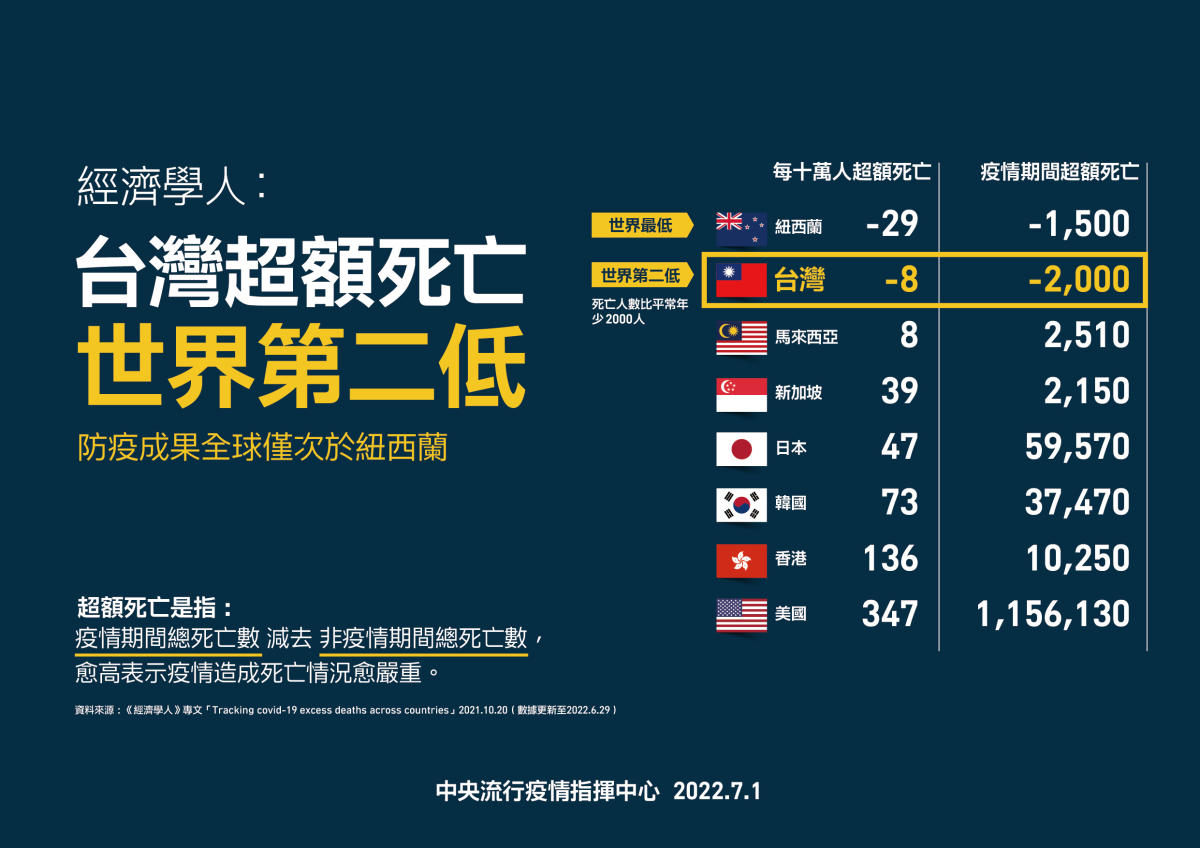 The country has experienced a wave of COVID-19 this year, and the excess deaths have aroused concern. Zhuang Renxiang, a spokesman for the command center, said that not only is Taiwan’s death rate far lower than that of major countries in the world, but the number of excess deaths is also the second-lowest in the world, second only to New Zealand.

The country experienced a wave of local COVID-19 (coronavirus disease 2019) last year, and the outside world wondered whether it would cause excess deaths. However, according to statistics from the Ministry of Health and Welfare, the total number of deaths last year was 184,000, an increase of 11,000 over the previous year. , but the correlation with the epidemic is low, and the overall excess deaths are still negative.

This year, the COVID-19 epidemic is more severe, and the excess death situation is also high-profile.

Zhuang Renxiang, a spokesman for the Central Epidemic Command Center, said at a press conference this afternoon that the death rate in Taiwan is relatively low among major countries in the world. Looking at the death rate per million people in the past two years, the number of deaths per million in the United States is as high as 3,151 and that in the United Kingdom is 2,707. , Hong Kong 1269, South Korea 478, New Zealand 299, compared with only 277 in Taiwan, slightly higher than Japan 248 and Singapore 233.

In addition to having the second-lowest excess deaths in the world, Taiwan ranks first in the world in terms of vaccination rates and antiviral drug administration rates for children aged 5 to 11.

I am strictly against the new crown pneumonia
New crown pneumonia today increased by 35,699 confirmed cases in China, 221 severe cases, 121 deaths
The definition of repeated infection is released, and those who are diagnosed within 1 month of diagnosis exclude 2 types of people who meet the conditions and can be notified
The country claims 1 yuan for compensation
8-year-old girl passed out with fever after taking BNT and was pronounced dead
For the 400,000 insurance money?Diagnosed mild disease requires hospitalization and nursing appeal: don’t waste resources
Special company / thermostatic pillow, high-tech toilet

“Kesh Malak” .. a Russian fighter with distinctive capabilities is preparing for the battle of Ukraine

Overwatch League: the change is already underway in the Boston