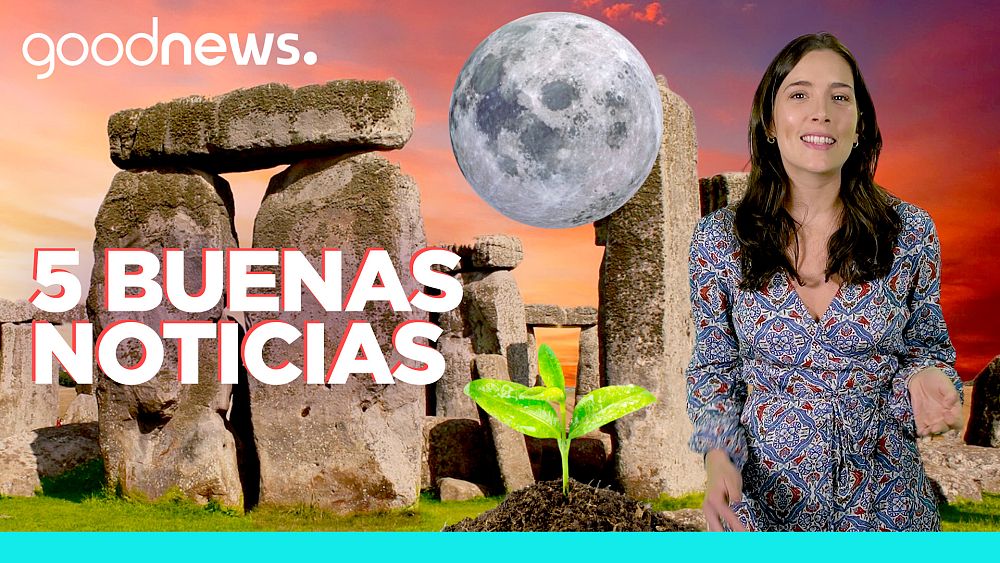 The news headlines may seem depressing, but there is good news and stories of hope.

That is why we have set ourselves a new mission: discover what is going well in the world so that we can tell you about it.

Here are the positive news this week:

Click on the video above to learn more about each story, or continue reading below…

1. New technologies reveal secrets in one of the most researched prehistoric monuments in the world

Stonehenge is a prehistoric monument located on Salisbury Plain, in Wiltshire, England.

But despite being instantly recognizable, it remains a mystery in so many ways.

Archaeologists have not yet been able to figure out the function of Stonehenge and how and why it was built.

But new findings are helping unlock some of those secrets.

A group of researchers from the University of Birmingham in England and the University of Ghent in Belgium have discovered thousands of prehistoric wells around Stonehenge thanks to new technological advances.

The researchers say this radically changes their understanding of one of the most intensively researched prehistoric sites in the world.

The largest pit they found (four meters wide and two meters deep) is the oldest trace of human activity discovered to date on Salisbury Plain.

It dates back more than 10,000 years, to the early Middle Stone Age, when Britain was once again inhabited by hunter-gatherers after the last Ice Age.

Researchers believe the pit was probably dug as a hunting trap for large game such as deer, wild boar and aurochs, a type of wild ox that is now extinct. And they say it’s the best clue they’ve had to date about what the landscape around Stonehenge would have looked like when it was built, which will now help them figure out what it might have been built for.

There are two really important breakthroughs, says Henry Chapman, one of the lead researchers at the University of Birmingham. “One of them is possibly less exciting, but it has to do with the way we methodologically understand geophysical data. There are many studies, but extracting meaning from them, especially aspects that do not make immediate sense It’s a big step forward.”

They have also identified the oldest activity at Stonehenge, “going back thousands of years before it was built. We’re talking more than 10,000 years ago.”

“The idea that people who hunted and gathered, we now see, built huge ditches (…) is something we really didn’t expect people to do that long ago, particularly around Stonehenge.”

The discovery also highlights a different kind of archaeology, “which we may start to see elsewhere as well.”

And while the Stonehenge landscape is unique, the methods used by this team of researchers at Stonehenge could be applied to other historic sites. In fact, sensor technologies and computer analysis could be the key to solving the oldest mysteries around archaeological sites around the world.

The question is: what will be next?

The Spanish government is studying the possibility of allowing women to apply for unlimited, paid “menstrual leave.”

And if the bill is approved, it will be the first European country to take the step.

According to reports leaked to the press, the bill will offer three to five days to women suffering from severe menstrual cramps, but the government says there will be no limit on the number of days that can be taken.

The affected women would have to present a medical certificate to their employer, and the leave would be paid by social security.

According to the Spanish Society of Gynecology and Obstetrics, around a third of menstruating women suffer from intense pain known as dysmenorrhea. Its symptoms include acute abdominal pain, diarrhea, headaches and fever.

But despite this painful reality for one in three women worldwide, menstrual leave is currently only offered in a small number of countries, including Japan, Taiwan, Indonesia, South Korea and Zambia.

The menstrual loss measure is part of a good package of proposals that will be sent to the Spanish Parliament for debate and official approval.

Among them, the reduction of VAT on feminine hygiene products in shops and their free provision in social and educational centers.

Read more about the new law, in an article written by Laura Llach and Natalie Huet here.

3. An initiative proves that laughter really is the best medicine

The NHS, the UK’s National Health Service, is officially prescribing comedy courses to help trauma patients “see the funny side” of things, following the success of a pilot programme.

The program, founded by British comedian Angie Belcher, is called Comedy on Referral and will allow patients to attend a free six-week course in which they will learn how to write jokes based on their trauma, then act them out on stage. scenery.

Comedian Angie Belcher, who has worked with health advisors to develop the course, says the big change she sees in people is confidence, “comedy gives you the power to look at your story and use it in a positive way to change the narrative of things.”

“Bare your soul on stage and say, well, I’m going to confess something. I’m going to tell you about myself and analyze it and also make people laugh is a really powerful and real thing, a very uplifting thing.”

The program will be delivered in various locations across England, including eight London boroughs. And Belcher says she’s cooking up another similar course for kids with autism and attention deficits.

How a group of scientists has managed to grow plants on lunar soil, which could make longer stays on the Moon a reality.

“Holy crap, plants can grow on lunar soil, and besides, we’ve now learned that there are some things we’re going to have to know and be able to do better if we want to farm (up there).”

For the first time, scientists have been able to use lunar soil to grow plants. And the results are promising enough that NASA is already envisioning greenhouses up there.

The possibility of growing plants on the Moon could make longer stays outside planet Earth a reality in the future, which could bring enormous benefits to extraterrestrial research.

The lunar land was not collected by a robot, but by the same Neil Armstrong and Buzz Aldrin, astronauts of Apollo 11 in 1969.

Researchers at the University of Florida planted watercress, a small flowering plant native to Eurasia and Africa.

All the seeds sprouted, although they ended up stunted. But the scientists are delighted with their results and plan to repeat the experiment.

Stephen Elardo, one of the researchers and a specialist in planetary geochemistry at the University of Florida, says this was the first step in what “hopefully will be a very long, decades-long process of figuring these things out, and when Let’s go back to the Moon, do it on the lunar surface.”

Robert Ferl, a co-author of the study, says that growing plants on the Moon is the key to a long stay on the Moon, as it helps provide not only food, but also clean air and water for astronauts and other visitors.

And the timing couldn’t be better, as NASA plans to return man to the moon in 2025.

A charity is planting gardens in prisons in England and Wales, and the project is bearing fruit of all kinds.

The Orchard Project’s aim is for every home in the UK to be within walking distance of a community garden, and that now includes prisons too.

Orchards are a refuge for fauna and flora, and the fruits that fall to the ground favor the growth of healthy fungi in the soil, which allows plants to capture more water and more nutrients, as well as helping trees to absorb even more carbon.

And the orchards have also been a reward for the inmates. As well as improving their environment, it offers them the opportunity to learn gardening techniques and gain skills that can help them find work when they are released from prison.

Some of them also dedicate themselves to taking care of the orchard and earn a salary for it. And inmates can taste the fruits of their labor, as the orchard provides a variety of fruits and vegetables.

The project is funded by the Ministry of Justice, and so far staff in around 30 prisons in England and Wales have been trained on how to plant and care for a vegetable garden.

Thanks for reading and watching the summary of good news. See you soon!

Solo en Off: “Let’s fake dementia”, the meme that is all the rage among albertist officials