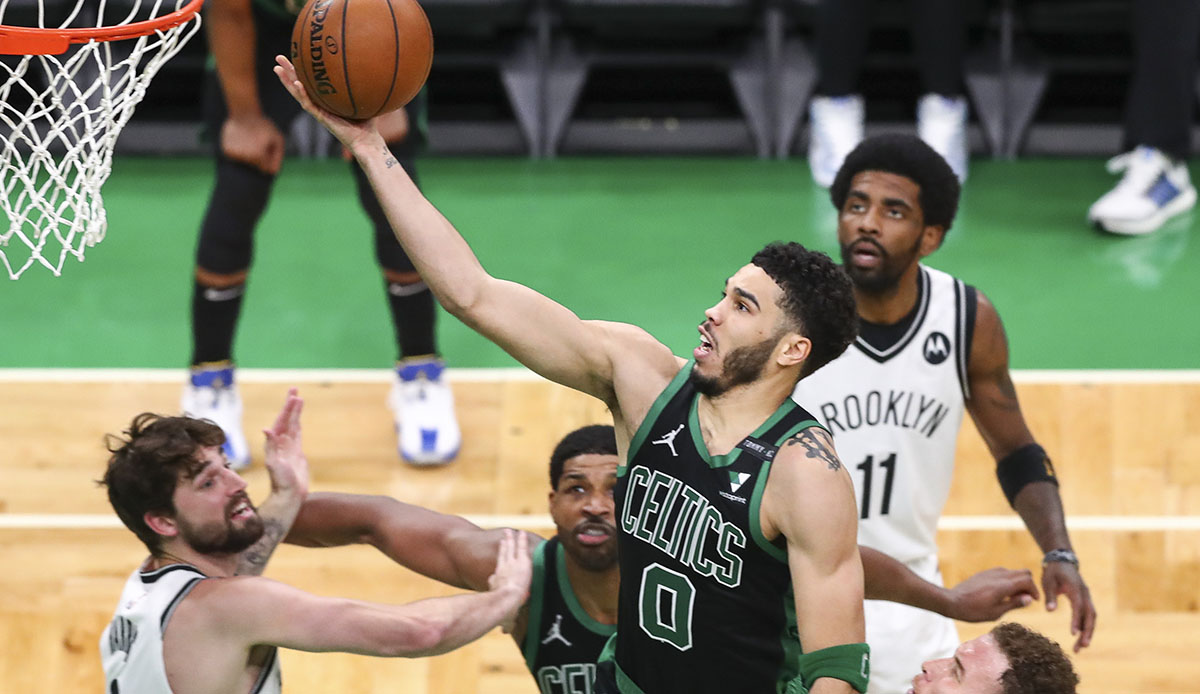 The Boston Celtics have made it to the playoffs! Jayson Tatum led his team to their first win over the highly-favored Brooklyn Nets in Game 3. In the 125: 119 victory of the Celtics, the 23-year-old shows the best playoff game of his career so far.

After Tatum had even led Boston into this duel with 50 points in the play-in tournament, he also followed up with 50 points (16/30) in the first home game of the playoffs and outshone two outstanding Nets stars. Tatum also distributed 7 assists and became the third youngest player in NBA history with a 50-point play in the playoffs, after Michael Jordan and Rick Barry.

He received support above all from the equally excellent Marcus Smart (23, 8/11) as well as Evan Fournier (17) and the tireless Tristan Thompson (19, 13 rebounds).

In the end it was enough for Boston, although James Harden (41, 11/18, 10 assists) and Kevin Durant (39, 13/24) showed great games on the opposite side. Kyrie Irving, on the other hand, didn’t make a good game, even though he increased his score to 16 with two threes in the last quarter (6/17). Brooklyn let the Celtics, with their backs to the wall, buy their guts off, especially in the duel for the rebounds (46:37).

The game marked Irving’s first guest appearance in Boston after he left the team in 2019 “in the bad” – accordingly, the point guard was in focus even before the game. In Boston only 25 percent of viewers were allowed, Irving booed them before the start of the game. These calls accompanied Irving for most of the game.

Over the first few minutes, this seemed to spur his teammate Harden, who contributed 10 points to an outstanding 19: 4 start of the guests – but it was not that one-sided afterwards, which was mainly caused by Tatum. The All-Star had 13 points in the first quarter, and after a 10-0 run at the end, the hosts even led 33:32 after a quarter.

In the second quarter, too, the Celtics were not ready to surrender to their fate. Durant and Harden were already at 17 points each, but Boston defended much better after the start of the disaster and limited Brooklyn’s offense, although Robert Williams also had to sign off injured during the game. Tatum could not be stopped at first, Thompson cleaned up under the basket, at the break the Celtics were in front with 61:57 and Irving was only at 2 points.

In the third quarter, the game degenerated into a Tatum show at times. The 23-year-old scored 19 points in this round alone and was already at 40 points before the last quarter, a new career record in the playoffs. Smart was also in a great mood from outside and since Kyrie was barely showing off, the Celtics took a 96-84 lead into the last round.

This advantage over Durant and Harden was still not certain, especially since Tatum was now defended more often by Bruce Brown and did not come to an end so easily. In the final minute, Boston led by 7, then Irving hit two free throws, but Tatum countered with another dry jumper over Durant! An offensive foul by Durant then seemed to seal everything, after a strange challenge KD got a free throw and possession instead.

21.5 seconds before the end, KD hit another three, it was only 119: 123. But Brooklyn didn’t foul – Grant Williams was released instead and dunked the end of an unbelievable game!

Nets vs. Celtics: All games in the series