(CNN) – Croatia was hit by a 6.3-magnitude quake, Croatian government-owned news agency HINA reported on Tuesday, causing major damage to Petrinja, a city near its epicenter.

The earthquake struck the Balkan country at 12:20 pm local time (6:20 am ET) and its epicenter was located 44 kilometers southeast of the capital Zagreb, according to the European-Mediterranean Seismological Center (EMSC).

EMSC said it was the largest earthquake to hit Croatia so far this year, adding that it could “cause significant damage at close epicentral distances.”

Darinko Dumbović, the mayor of the Croatian city of Petrinja, called for immediate emergency help, saying that “half of the city has been destroyed,” HINA reported.

Photographs from the city showed a collapsed roof of a building and a car crushed by falling debris.

Dumbović described scenes of “panic” after the earthquake during an interview with Croatian CNN affiliate N1. “There is panic, people are looking for their loved ones,” he said.

“We are getting people out of the cars, we don’t know if people have died or been injured. I heard that a kindergarten collapsed but luckily there were no children there, while in another the children were able to escape, “added the mayor.

“We have mobilized all available services to help people and clean up all the broken pieces,” said the prime minister.

Reuters reported that the earthquake could be felt as far away as Zagreb. Photographs from the capital showed broken tiles, bricks and other debris. 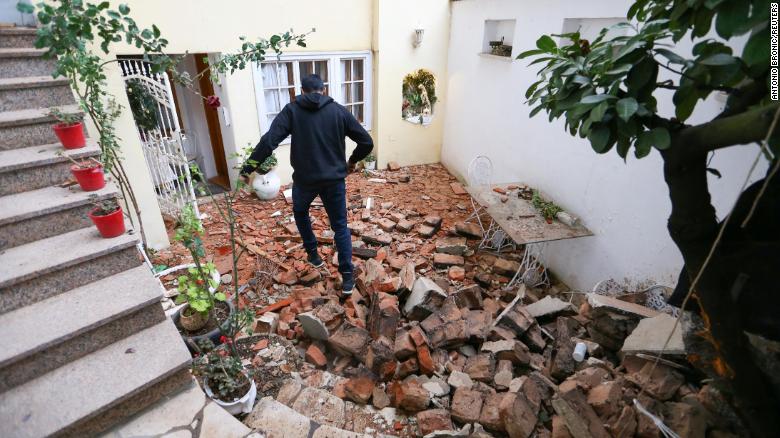 Damage in Zagreb, Croatia, after the earthquake.

At least one child died after Tuesday’s quake in Croatia, the mayor of the city of Petrinja, near the earthquake’s epicenter, told CNN’s Croatian affiliate N1 on Tuesday.

“My city has been completely destroyed. We have a dead child. I can’t describe it. It’s like Hiroshima, ”Petrinja Mayor Darinko Dumbović said in an emotional call for support.

“We need firefighters, we don’t know what is below the surface. A roof fell on a car, we need help, “he added.

Sharon Braithwaite and Ena Bilobrk contributed to this piece