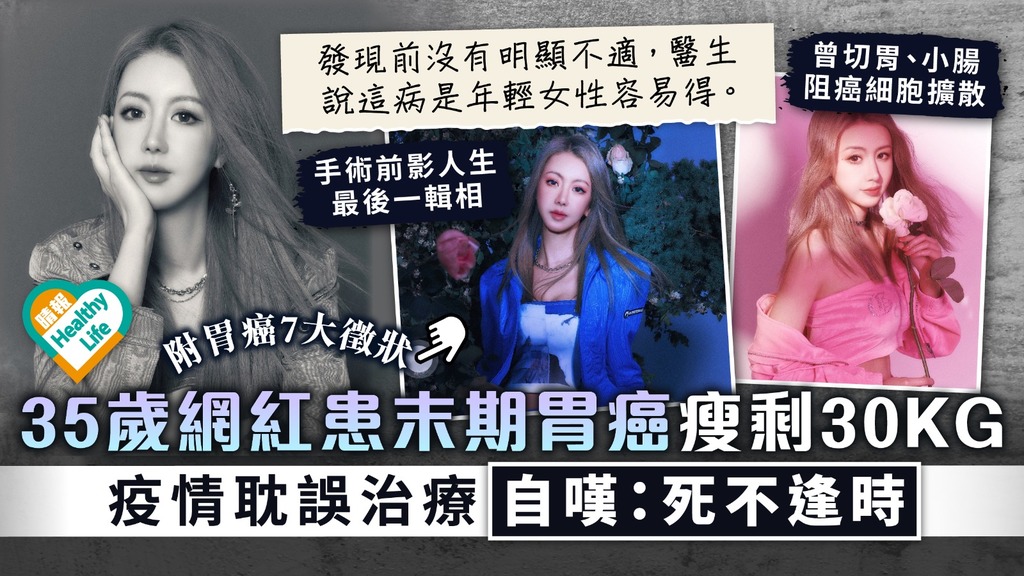 Cancer has been getting younger and younger in recent years, quietly claiming countless lives. “Mint Sauce Xiao Q”, a female internet celebrity with 1.2 million Weibo followers in mainland China, suddenly disappeared in April last year, but recently she suddenly updated her current situation and issued a “posthumous photo”, revealing that she was suffering from end-stage gastric cancer. After removing the stomach and part of the small intestine, the cancer has not been prevented from progressing. I believe that my time is short, so while I still have the strength to type, I post a formal goodbye to netizens, and I hope that I will still have the chance to see my relatives and friends one last time. , the news made netizens sad.

The Internet celebrity “Mint Sauce Xiao Q”, who has 1.2 million followers on Weibo in the Mainland and started by introducing medical and beauty care products, suddenly stopped updating Weibo since April last year. After disappearing for a year, it finally appeared yesterday (22nd). renewcurrent situation, but it was the sad news that he was about to die. She revealed that she was diagnosed with end-stage gastric cancer, so she has not updated her Weibo news. Now, while she still has the strength, she wants to say goodbye to her fans in person.

She said that she had the most dangerous form of stomach cancer, and she had no obvious discomfort before the discovery. She believed that it was caused by family inheritance and gene mutation. “The doctor can’t tell, but he just said that this disease is always easy for young women to get.” After suffering from cancer, she has been working hard to receive various treatments, including removal of the stomach and part of the small intestine, numerous chemotherapy treatments, targeted drug therapy, etc., but she still cannot stop the spread of cancer cells.

“I’m getting more and more serious. I can’t eat or drink at all. I’m half paralyzed in bed and rely on infusions to maintain my signs. 168’s height and weight are only a little over 60 pounds (about 66 pounds).”

She also pointed out that due to the new crown epidemic, even if the Chaoyang District of Beijing where she lives is not a closed and controlled community, there are still many inconveniences in transportation, making it difficult to go out to seek medical treatment, let alone seek medical treatment in other places; and went to Shanghai for clinical target testing The point has also been postponed indefinitely, so I believe that under the current condition, I can no longer wait, “Of course I don’t want to be cured, and I can’t cure it, it is too painful, every minute and every second is suffering, and hopeless.”

After trying her best to get no results, what she regrets most is that she was unable to see her relatives and friends for the last time, take photos and say goodbye before her death due to the epidemic, community lockdowns, home isolation and other reasons.

“They are all trying their best to come. I hope I can survive until the moment we meet. Except for my friends in Shanghai, it must be eternal. Fortunately, my parents finally came to my side.”

She also shared a series of photos she took before the operation last year in her post, which she believes will become her own. This is the first time she has revealed her appearance since she became an internet celebrity. I only hope that netizens will like her. “I will always be in the year of 35. I only hate myself for having a rough fate, and I am sad that my death is not at the right time.”

The confession of “Little Q with Mint Sauce” shocked many netizens, and everyone sent her blessings and comforts, “It was so shocking, the first time I saw Xiao Q on the scene was in this situation… I hope you can not Painful and uncomfortable, of course, I believe in miracles.” “You are so good, God wants you to stay at the most beautiful age”, “If you are tired, let yourself go comfortably. There is more than one life in life, just like when you are tired, you will sleep , it’s a new day when you wake up. I hope that on a new day, you will still be that reliable and beautiful girl.”

Doctor: The early symptoms of gastric cancer are not obvious, similar to gastritis

Chen Liangzu, a specialist in clinical oncology, said in an interview with The Sky Post earlier that the early symptoms of gastric cancer are not obvious, and the patient may be at an advanced stage when it is discovered. He pointed out that there are many kinds of stomach tumors, generally referred to as gastric adenocarcinoma, patients usually feel full, stomach pain, prone to anemia, black stools, symptoms similar to gastritis, mainly treated by surgical resection.

There are many factors that cause gastric cancer. Some studies have found that Helicobacter pylori infection may increase the chance of gastric cancer. The following six categories of people are also at high risk:

U Lifestyle App’s own program is registered in the “U TV” section!

↓↓Try play, try food, and try video for you to watch↓↓

A Jordanian presenter on the super beautiful Al Arabiya channel forgot that she was live… and what she did without any shred of shame ignited the anger of the Jordanians.! ! (video)