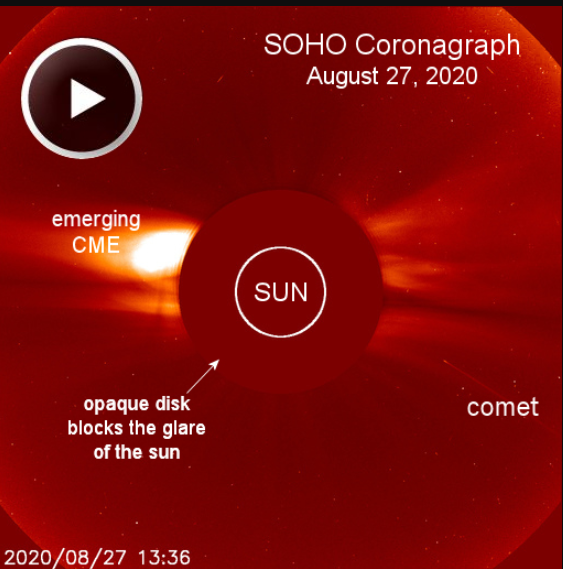 The solar system has one less comet. On August 27, 2020, the Solar and Heliospheric Observatory (SOHO) observed a comet sink into the sun and disappear. The fierce solar heating completely destroyed the icy visitor from the outer solar system. See in sequence the last hours of the comet:

A comet came in, none came out

Discovered just two days ago, the comet is a sungrazers Kreutz, a fragment from the rupture of a giant comet many centuries ago. SOHO has discovered thousands of solar debris from sungrazers Kreutz; the little ones bombard the sun almost every day. This fragment was larger and brighter than usual, but it suffered the same fate as its brothers: annihilation.

Some readers have drawn attention to two CMEs receding from the sun at around the same time that the comet was disintegrating. They are conspicuous in this sequence:

Did the comet explode the sun?

Probably not. The comet disintegrated high above the surface of the sun, more than 350,000 km away. There is no known way that the wispy, vaporous remnants of a light comet would dislodge a billion-ton cloud of hot plasma from the sun, let alone two billion plasma clouds.

PS: CMEs are not targeting us. They will both miss Earth.

See Also:  What if the Big Bang was not the origin of the Universe?