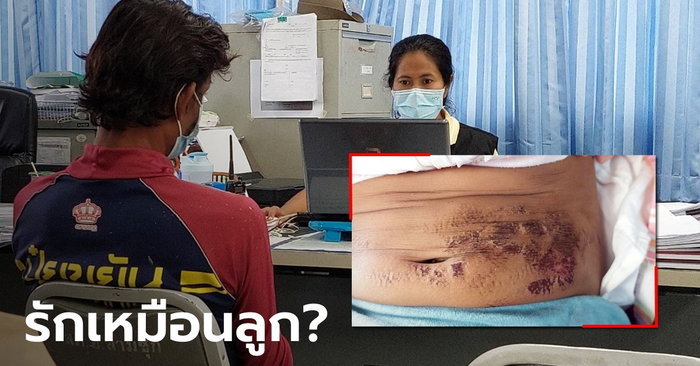 collectconstruction boyRape the daughter of a 6-year-old friend, punching the stomach and biting the cheek Claims to love children like real children. but caused by drunkenness

medianewsreported that yesterday (July 21) police officers at Sam Chuk police station, province.Suphan Buri Arrested Mr. Charan or Pui, 41, a construction worker from Ban Sa Subdistrict, Sam Chuk District, Suphan Buri Province, after committing a case of rape of 6-year-old girl Joy Nam Sut, which happened on 17 July. C. In the past, before escaping, but did not survive, he was arrested by the police at an unnumbered worker’s house in the area of ​​Moo 3, Sri Samran Subdistrict, Song Phi Nong District, Suphan Buri Province.

After being detained for questioning at Sam Chuk Police Station, Suphan Buri Province, Mr. Charan or Pui revealed that he was a friend of the child’s father. And close and familiar with Ms. Joy, a fictional name very well. In the past, she would regularly take the children to sleep overnight at the lodge.

On the day of the accident (13 July), the girl, Joy, named after her, went to spend the night at an unnumbered house, Village No. 10, Ban Sa Sub-district, Sam Chuk District. Late at night, she poked her finger into the child’s genitals. before bringing the child to the parents without a doubt

Then late on July 17, the boy’s father called to meet him at the grocery store. In the village, Moo 5, Yan Yao sub-district, before telling the boy’s father that he will take him to play at the unnumbered house, Village No. 10, Ban Sa Sub-district, Sam Chuk District, then turn on the phone for a 6-year-old boy to look at and buy some snacks for him to eat.

until he saw that his phone’s battery was about to die So tell the child to bring the phone to charge the phone. But the child did not allow it because the child was watching cartoons. therefore anger Forcefully pinch the stomach. Use a wand to hit the head. then go to bed

He woke up early in the morning on July 18 and realized that the child’s father had not yet paid the 400 baht loan debt until he became angry again. So he used his mouth to bite hard on the child’s cheek. and use his fingers to reach the child’s genitals Before bringing the child to the fish pond behind the father’s employer’s house, Village No. 5, Yan Yao Subdistrict

The little boy walked into the house with wounds all over his body. When his mother and sister saw that they were shocked by the wounds, Ro went to meet with Police Lieutenant (Ying) Sirikul Panpetch, investigative officers at Sam Chuk Police Station, to arrest Mr. Charan to prosecute.

But in the meantime, Mr. Charan or Pui called to ask for compensation for the damage he had committed. When negotiations are ineffective So he fled to the wife’s house at the unnumbered worker’s house in the area of ​​Moo 3, Sri Samran Subdistrict, Song Phi Nong District, Suphan Buri Province, before being arrested by police at the house.

As for this unlucky little boy Police officers at Sam Chuk Police Station were taken to Sam Chuk Hospital. for physical examination Doctors identify through incest On the right cheek there was a bite mark, clearly visible teeth marks. The body has blotches of blood. and a bruise on the abdomen, size 20X20 cm. red swollen penis There are traces of tearing.

Recently, Police Lieutenant Colonel (Female) Sirikul Panpetch, an investigative officer at Sam Chuk Police Station, brought Mr. Charan or Pui, 41, for further questioning. The accused confessed that the reason he took him was because he loved the child like a real child. But the act because of drunkenness but denied that the genitals were inserted

However, on July 21, the investigating officer will request the jurisdiction of the court. to request permission from the court to detain the accused for further legal proceedings