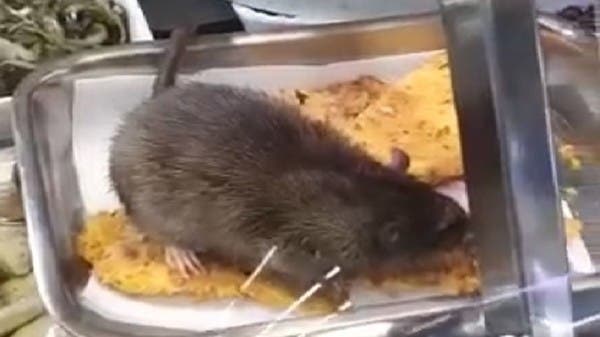 Two days ago, the Italians felt a cocktail of disgust and disgust, after watching a video that spread in various locations, and his experience crossed the borders to other countries in distant continents, in which a rat appears while it is eating from a fried fish “fillet” ready for sale in a supermarket in the capital, Rome, and photographed by a customer He intended to buy a meal of the same food, but he found that the famous “rodent king” preceded him to the plate, and he was not interested in who was looking at him and photographing him.

Out of the customer’s anger and resentment, he kept the video that blackmailed the supermarket owner for two months, during which he threatened to broadcast it on social media, if he stopped paying. However, the clip shown by “Al Arabiya.net” below, appeared two days ago in an Instagram account belonging to someone else who filmed it, and within minutes the Internet ensured that it snatched the spotlight from any other video, so millions watched it and its news made headlines in the Italian media, which accused its opposition government Involvement across it in an alleged conspiracy.

The owner of the supermarket, Giampiero, has been as active as he can in the past two days, to restore to his store what was previously a good reputation, and to avoid the wrath of officials in the authority known by the acronym NAS, the long name of the strict circle in the exercise of control over restaurants and food outlets.

Giampiero also admitted to the local newspaper Il Messaggero that he was subject to blackmailing the videographer not to reveal him “but I was apparently betrayed, the video spread quickly” and told her that he closed the doors of the store temporarily “out of respect for our customers”, blaming the area where his store is “infested with mice” And our battle rats is tough,” he said.