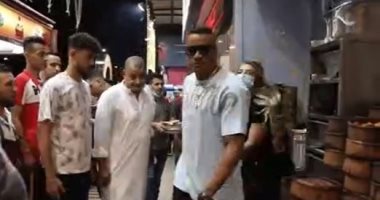 Anchor, Mai Helmy, appeared with festivals singer Hassan Shakoush, yesterday, Monday, inside a popular restaurant, while they were having dinner, and Mai was keen to distribute food to the members of the table, and her face was marked with signs of happiness and joy..

Mai attended the restaurant, accompanied by Hassan Shakoush, in his car, and they appeared as they exited the restaurant holding each other’s hands, which some interpreted as an official announcement of their association, especially since Mai Helmy appeared a few days ago and announced that she was living a new love story, but she did not reveal her lover..

Mai refused to reveal the identity of her lover, the past few days, and contented herself with writing: “Lord, I see all the people who are happy with Adi.. I do not want you to be upset with me, because I will not be able to answer any questions about who is coming or who is who and how and where. It is enough that I shared my joy with you from my heart, but I learned (Turn on your candle being tied) But I promise you, as soon as the right time comes, you will be happy.”