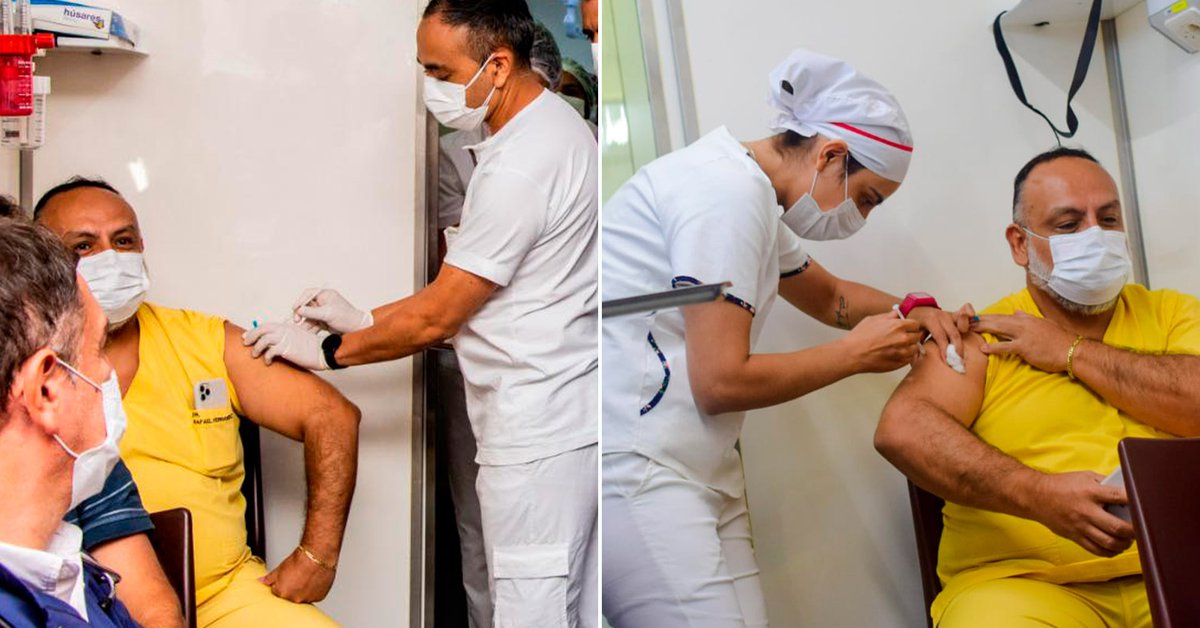 The photos of the doctor Rafael Fernández during the vaccination operation

The vacuna rusa Sputnik V It began to be applied this Tuesday in different provinces of Argentina and many officials published photos of the operation.

As recognized by the Buenos Aires governor Axel Kicillof, the dissemination of these images also seeks to bring peace of mind to citizens to the questions that the Russian vaccine received due to the lack of technical data that demonstrate that its application is safe.

“You have to literally put your shoulder on it. With my vaccination I simply want to express my point of view: my absolute and total confidence with this vaccine, and with all vaccines as long as they are approved by ANMAT. I got vaccinated to show my absolute confidence in ANMAT, ”said Kicillof.

Along the same lines, Riojan Vice Governor Florencia López He participated today in the vaccination operation at the Vera Barros Hospital. “Thanks to all the Health Personnel of the Province who were in the front line of battle, today hope is reborn in a historic day full of many emotions!”, Published the official, along with several photos of health personnel receiving the first dose. 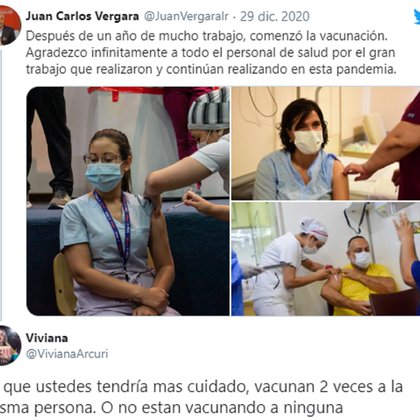 The same did the provincial health minister Juan Carlos Vergara, who also posted a series of images. However, the controversy broke out on social networks when some users noted that a doctor appeared twice receiving the vaccine, but once in each arm and administered by different nurses.

“I would be more careful than you, vaccinate the same person twice. Or they are not vaccinating any “commented one user wryly.

The photos began to go viral and the protagonist sought to clarify the situation. Rafael Fernandez, president of the Vera Barros Hospital Crisis Committee, was contacted by various local media. And he also turned to social networks to make his download: “I want to clarify that I have not been vaccinated twice. This morning it happened that there was an important conglomerate of people who wanted to participate in this first vaccination. And for the convenience of the press, the change of place and the change of arm was decided ”.

And continued: “The nurse continued to vaccinate his line, which is why the personnel change. Don’t be mean with the interpretations ”.

Fernández worked in the hospital with those infected since the beginning of the pandemic. In fact, he revealed that he was infected four months ago but never had any symptoms.

The Strategic Vaccination Plan against the coronavirus began this morning throughout the country, after a distribution operation of 300,000 doses of the Sputnik V vaccine arrived from Russia, which at this stage will be applied to health personnel, the first in line battle against Covid-19.

The vaccination scheme began simultaneously in all the provinces, where in the last hours they received the doses in the framework of an operation that included hundreds of preservatives, tons of dry ice and a large number of trucks, and which concluded with the arrival of vaccines to 32 points of the national territory, according to the Health portfolio.

The Minister of Health, Ginés González García, described the plan as a “great epic, the largest vaccination in Argentina” and appreciated that, thanks to joint work with the different jurisdictions, this task can be carried out “with equity and equality of rights for all Argentines ”.

Province by province, how the vaccination was started and how many governors applied the first dose

Ciccone case: prosecutors again asked for Boudou to return to prison after confirmation of sentences

Juanfer Quintero, with an open heart: what he had to sacrifice for success and why he left River