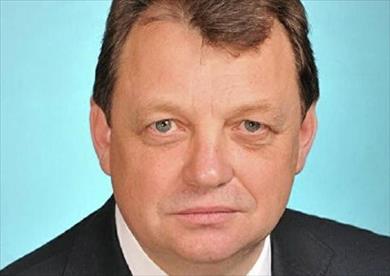 The source confirmed in a statement today, Saturday, that the forensic medicine obtained samples from the body to determine the causes of death, which the initial medical report suggested that the death was the result of asphyxia by drowning, and there is no criminal suspicion behind the accident.
He pointed out that a delegation from the Ukrainian embassy came to the hospital to follow up on the incident, and a team from the Criminal Investigation Department of the South Sinai Security Directorate is investigating the incident, and hearing the testimony of witnesses about the incident.
On the other hand, Sheikh Musa Salem, a resident of the city, revealed that the deceased had been visiting the city of Dahab for tourism for three years, and had resided in one of the tourist villages in the Al-Asala area, and no one knew that he was the head of the Ukrainian intelligence service earlier.

Yesterday, Friday, Major General Ahmed Al-Alfi, Director of South Sinai Security, received a report from Major General Mohamed Al-Anani, Director of the Criminal Investigation Department, stating that Victor Hvoz, 62, of Ukrainian nationality and holder of passport number ER315593, had been found dead after He drowned while on a diving trip in one of the tourist villages.

It turned out that the deceased was born on May 24, 1959, and he was working as the head of the Ukrainian intelligence service. He had been residing in Dahab, South Sinai, for some time, and working in one of the city’s diving centers. He was called Adventure among the citizens, and he was one of the customers of a diving center in the city.

A medical source in South Sinai Governorate said that the deceased arrived at Dahab General Hospital, and the initial examination indicated that the death was the result of asphyxia by drowning, and there is no criminal suspicion.

Some websites had indicated that the Ukrainian authorities reported today, Friday, the death of the former head of the country’s foreign intelligence service, Viktor Gvouzd, by drowning in Egypt.

The Deputy Foreign Minister of Ukraine, Vigeni Yenin, confirmed the death of Gvouzd as a result of drowning in the resort of Dahab in South Sinai.

This comes after Ukrainian media reported that the body of Gvozd, 62, was found on the beaches of Dahab and the local ambulance service tried to rescue him and he was taken to a local hospital, but he died.

Gvozd was appointed head of Ukraine’s foreign intelligence service in February 2014, at the height of the acute political crisis that toppled the rule of the country’s former president, Viktor Yanukovych, and Gvozd held this position for two years and was dismissed in April 2016.