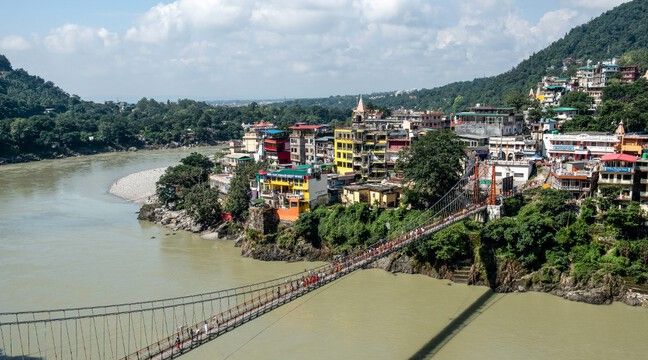 A French woman was arrested by Indian police after posting video of her showing her naked on a sacred bridge in the city of Rishikesh in northern India. Placed in detention Thursday, the 27-year-old woman, whose police only released the first name – Marie-Hélène – was released on bail and her mobile phone was confiscated. She faces up to three years in prison if found guilty of violating the laws that regulate internet use in the country.

“Maybe in France these things are not considered debatable,” said the head of the police station where the Frenchwoman was taken. “But Rishikesh is a sacred place and the (pedestrian bridge) Lakshman Jhula” on which she filmed herself, “is the place where (the Hindu gods) Ram, his brother Lakshman and his wife Sita crossed the Ganges”, said explained RK Saklani. “She told us that she was selling pearl necklaces online, and that the video was meant to promote her business,” he added.

The Frenchwoman also photographed herself naked in a hotel room

The bridge is not far from the ashram where the Beatles chose to do a spiritual retreat in 1968, and Rishikesh, at the foot of the Himalayas, is popular with hikers and yoga enthusiasts.

Present since March in Rishikesh, according to the police, the Frenchwoman also photographed herself naked in a hotel room. The police were put on alert by the publication of these photos and the video on social networks.

See Also:  A year later, a symbolic banquet of the "murderers of maternity" of the White