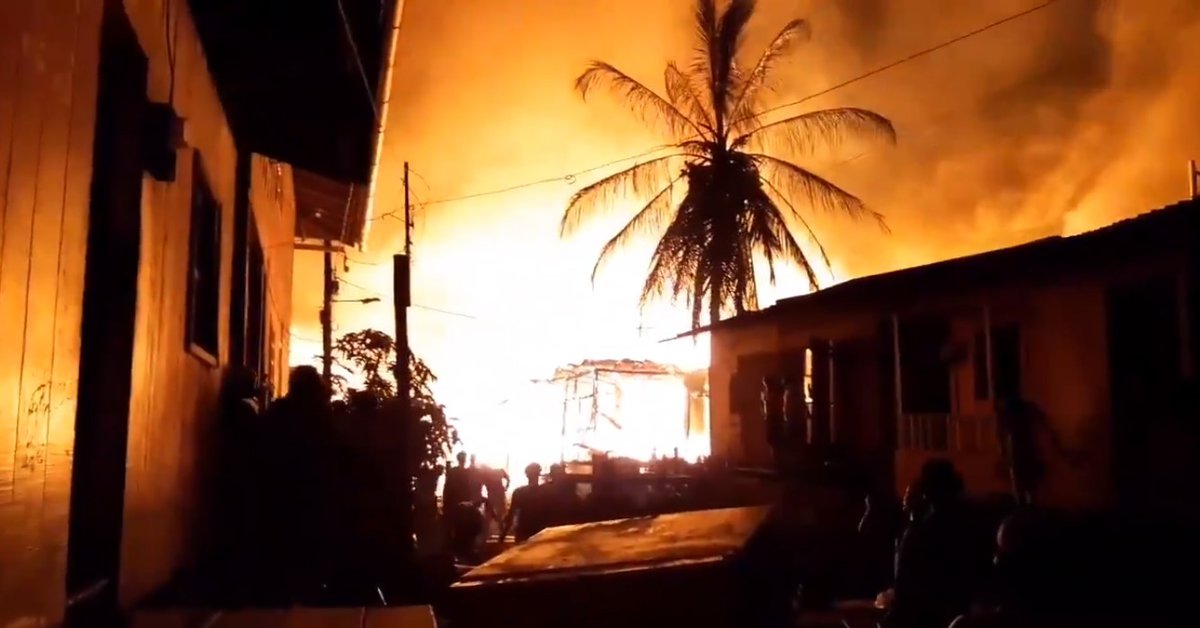 The conflagration began at 11 pm on November 28 and extended into the early morning of November 29. (Video capture)

The fire in Riosucio, Chocó that started on the night of November 28 and spread during the early morning of November 29, has so far left 73 homes burned and two dead.

The fatalities, according to the mayor of Riosucio, Conrad Valoyes, They were a girl of approximately 8 years of age and an official of the municipal administration, identified as Mery Palacios Mosquera. He also assured that they already found the whereabouts of the person who was missing.

According to information from El Tiempo, President Iván Duque instructed the National Unit for Disaster Risk Management – UNGRD – and the Vice Minister of the Interior, Daniel Palma, so that they could move to the place from the morning of this Sunday, in order to work with local authorities in dealing with the tragedy.

Serious fire in Chocó left one dead, dozens injured and hundreds of victims

“We regret the death of two people in Riosucio, Chocó, and painful emergency that several families are experiencing due to a raging fire that affected more than 50 homes. Since last night we have been in contact with Conrad Valoyes Mendoza, mayor of the municipality, to support the victims ”, confirmed the president.

For his part, Valoyes Mendoza, pointed out that from 3 am the fire could be put out with the help of the community, the National Police and the Army, but the conflagration left about 350 people affected. 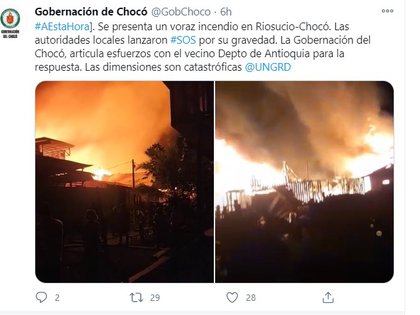 “There are 62 homes, with approximately 300 people. Apparently, the fire was the result of a short circuit in a house and this generated the conflagration. In the municipality 90% of the houses are made of wood. Fortunately, the community managed to control the flames because if not, the disaster would have been worse, “said the mayor on RCN Radio. 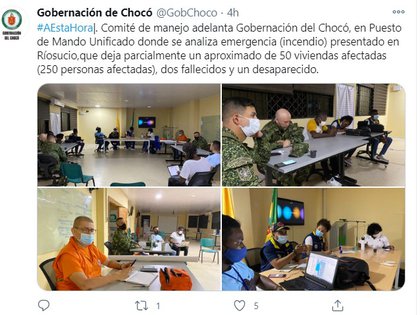 Although the causes of the fire in the municipal seat of Riosucio, where about 1,000 people live, are unknown, the truth is that since 11 pm its residents have cried out for help. Apparently, in the municipality there are no fire engines, so the flames could not be controlled.

“It hurts, because they tell me that a young woman died together with a girl in her arms, trying to escape from the flames”, is one of the phrases of the moving testimony of the social leader of the Pacific, Yolanda Perea, in which she questions the lack of attention to the fire that occurred between the night of November 28 and the early morning of November 29, in the municipality of Riosucio, Chocó.

What hurts him the most, however, is that the lack of attention to the fire was the result of the permanent abandonment of a people that “has been hit by violence, by the dispossession of the land, by the murder of our parents and violence. sexual that many of us had to live as girls ”. According to her, now, when they try to “smile at life, things happen like a fire, in which there is no one to help pay for it.”

“This hurts, it hurts a lot, because I don’t understand until when, our black, peasant and indigenous peoples are going to continue carrying the bundle, it’s hard because we bite the bullet and smile. We invent new ways of living so that they do not see us as the poor, but nothing is enough, nothing is enough, because when violence does not end us, hunger ends, the dispossession of our lands … ”, he concluded.

Impressive videos recorded the anguish and helplessness in the middle of the fire in Riosucio, Chocó

Armando Benedetti uncovers his letters: he speaks of the ‘center’, of uribism and anticipates that he is not the only one who will jump to Petro’s Human Colombia