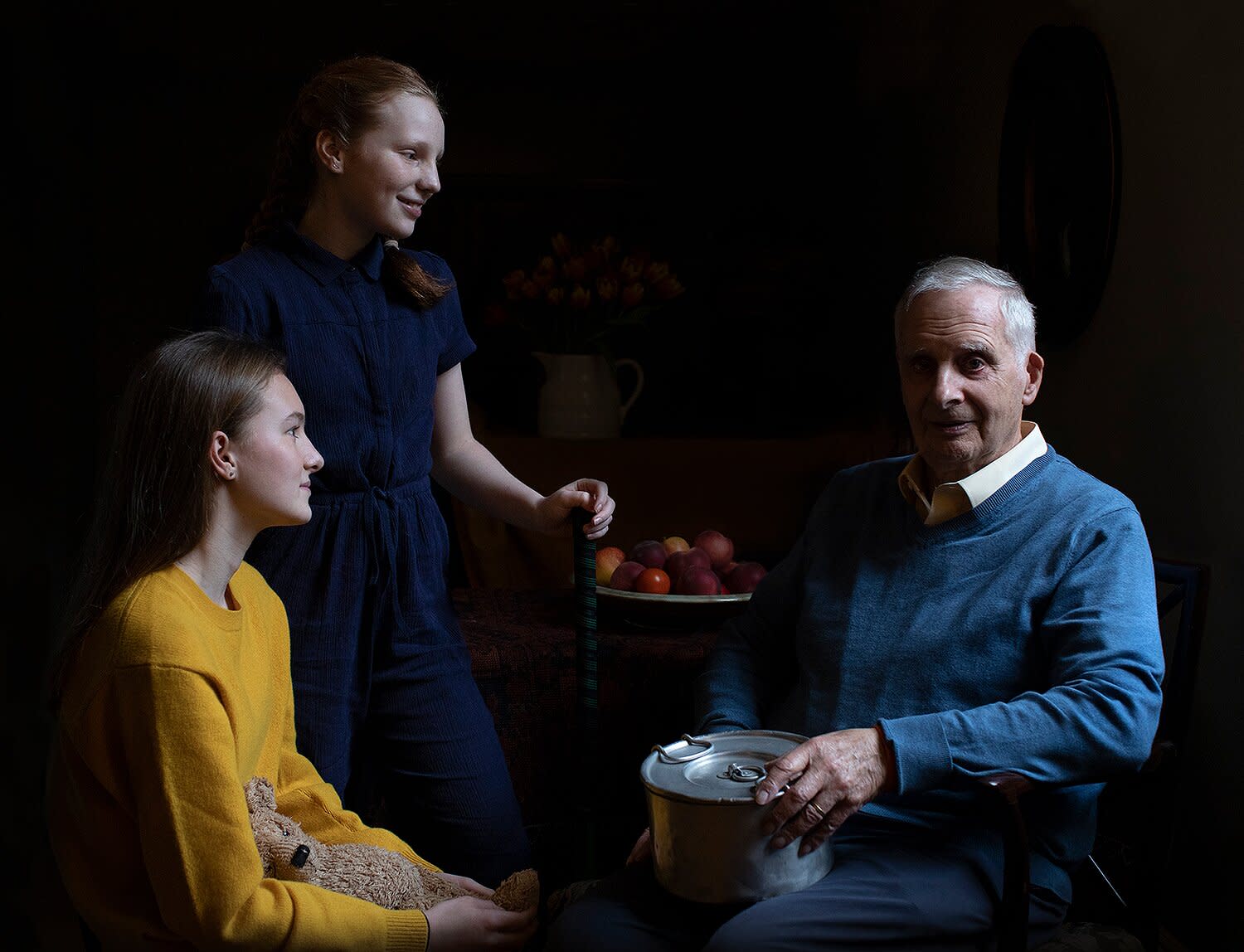 A Holocaust survivor who recently sat for a milestone portrait with his two granddaughters was touched by how keen the photographer Kate Middleton was to calm him and his granddaughters.

Frank, who was just five years old when the Nazis invaded the Netherlands, was a young eyewitness to the terrible persecution and mass murder of Jews by the Nazis. His father Leonard was a lawyer who spoke out against the Nazis and joined the resistance.

“When it became clear that the Germans would invade Holland, we had plenty of opportunities to flee to England, but my father was a very humanitarian man and was very committed to people who weren’t as good as us,” says Frank towards PEOPLE.

Steven Frank was photographed with his granddaughters Maggie and Trixie.

Steven (middle, 2nd photo) was sent to the Westerbork transit camp and then on to Theresienstadt. Steven and his brothers were 3 out of only 93 children who survived the camp, out of 15,000 children sent there. pic.twitter.com/zaBhWyLHns

Leonard was betrayed and arrested by the Nazis in December 1942. Steven and his two brothers Nick and Carel never saw him again. He was murdered in the gas chambers on January 21, 1943.

See Also:  General ballot in the race for the Valais Council of State - rts.ch

Kate, who photographed Frank alongside his granddaughters Maggie (15) and Trixie (13), “is pretty talented. She had a tripod with a Canon camera. She transferred it to a screen on a monitor and looked at the monitor at the same time to see if everything was OK. She took a lot of photos. “The Duchess also photographed another survivor, Yvonne Bernstein, and her granddaughter Chloe.

“There were minor changes in position, and my older granddaughter’s hair was a little in the way so it was moved aside. All of the tiny details she discovered make a good photo.”

Kate modeled the shoot based on a painting by Johannes Vermeer – who was like the Dutch Franconian. “It’s just beautiful,” he says of the portrait. “It captures the light that would have come through a window.”

Frank and his two granddaughters were each asked to bring something moving for the shoot. Maggie let her grandparents give her a teddy bear named Abby, while Trixie carried a hockey stick, knowing that Kate was an avid gamer. (“She talked to them about it,” he says.)

The Duchess also photographed Yvonne Bernstein with her granddaughter Chloe. Yvonne was a hidden child throughout the Holocaust in France, traveling in the care of his aunt and uncle, and changing clothes frequently. pic.twitter.com/eA51kjLyyV

Steven Frank brought a pan and a tomato from his garden. The tomato marked the plants that he helped another inmate to grow and harvest food in the family’s last camp in Theresienstadt. “The pan basically kept us alive, especially because my mother is so versatile in getting food here and everywhere,” he says.

The resourceful woman, who died in 2001 at the age of 90, got a job in the camp’s hospital laundry. In return for washing for other prisoners, she received scraps of bread from which she made porridge for her children. “At some point she would put all of these crumbs in a pan, add some hot water and make a paste. She came to the children’s barracks where I was with my brothers and alternately fed us one spoon, one bite at a time. I never saw her eat a spoon myself. Food kept us going – the pan was the most important thing she took to the camp. “

He praises his late mother that he and his brothers survived despite all the difficulties: “With their maternal instinct and wings over their three children, we have done remarkably little damage.”

He says his mother has “incredible character strength”. When his father Leonard was arrested for working for other Jews, “she found out who the cleaners were and went to this prison disguised as a guy. Guy is here and washes the floor – and she spoke to my father briefly.”

In the first camp in Westerbork, where they were arrested in March 1943, Frank remembers British fighter jets shooting bullets at the camp because they thought it was a military camp.

“I had just entered the barrack when the attack started, and I ran through a hail of bullets to our table, where we gathered to eat and talk among the approximately ten residents who became our social group,” says he. “I experienced my first death there – a man we had learned to love and with whom his wife remembered my mother in English [who was born in Eastbourne, England]I was deeply shocked to see that this wonderful man, who loved England so much, was killed and the blood of British bullets gushed out of his body. “

Later he and his brothers in Theresienstadt (which he calls Theresienstadt) experienced the horror of witnessing the selection of young people who were to be transported to Auschwitz.

“They separated siblings, one to go to certain death and one to go into an uncertain future,” he says. “It is everything these children had left. Each other.

“Parents gone; other siblings disappeared. And I saw the howling and screaming when these siblings were torn apart. I still hear requests: “Please, let me go with her.” “Let me stay with him.” The guards replied, “No, you out!” They pointed the malicious finger at the door. “

“Both she and Prince William were very interested in the Holocaust and Remembrance Day. William was in the press with Holocaust survivors and his father is the patron of the Holocaust Memorial Day Trust. There is a particular interest in informing people about what is happening, getting their testimonies and passing them on to other generations. “

He appreciates how members of the royal family can reach other communities across the UK and beyond. “The modern more. It started with Princess Diana walking through the minefields. “

“They are really interested in what we do, the Holocaust Memorial Trust, and what we want to do for the younger generation.”