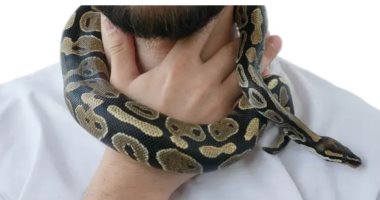 An American officer managed to save a person, after he shot a snake After arriving at a Pennsylvania home, they found the python wrapped around its owner’s neck, causing him to lose consciousness. The 28-year-old is recovering in hospital from an attack by his “pet” snake, according to Al Arabiya.

Lieutenant Peter Nekesher of the Upper McCongee Police Department revealed that the injured snake ran away and eventually died of its wounds. The eastern part of the state, where a man reportedly suffered a heart attack after a snake wrapped itself around his neck.

After entering the house, he said, the officers met a family member who directed them towards the owner who was lying on the ground and unresponsive as the snake, which was more than 15 feet long, was choking him. death of this person.

He continued: “When the officers looked at the hallway, they noticed the man lying across the entrance between the hallway and the room, while the snake was staring at the police, and the officer fired a single shot that hit the head of the snake, which was far from the man because of the length of the snake’s body.”

Officers then dragged the man away from the snake into the living room, where several fire department and emergency services resuscitated him before taking him to the hospital. Officers made a “quick decision” that saved the man’s life, adding that he was confident the man would have died otherwise.

Health: The National Council for Mental Health responds to 100% of complaints from the complaints system