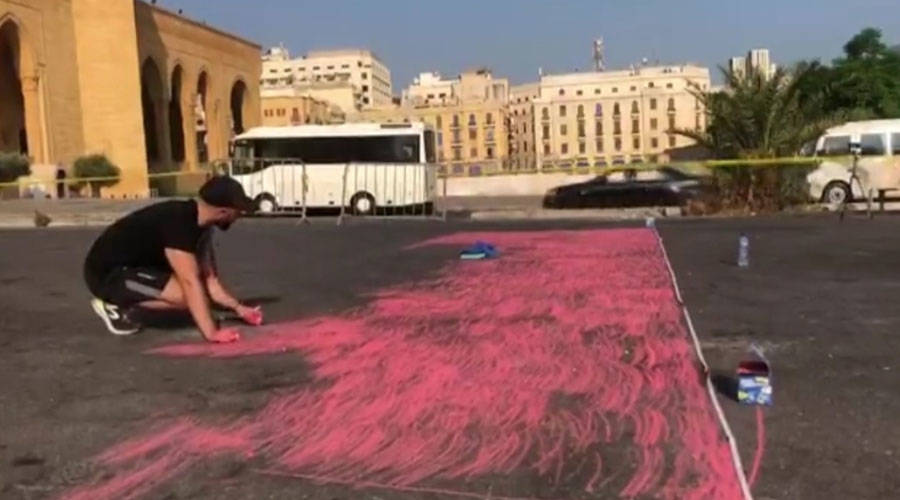 Beirut – AFP
A young Lebanese painter is trying to enter the Guinness Book of Records by drawing the Lebanese flag with chalk in the center of the capital, Beirut, on an area of ​​200 square meters, in a move that aims to send a message of “hope” to his country, which is mired in an unprecedented economic and social crisis.
Painter Giovanni Bassil, 24, from Martyrs’ Square in central Beirut, explained that the idea of ​​this initiative came to him by chance after he was informed on the Internet of the previous record achieved by a Uruguayan who drew his country’s flag with chalk on an area of ​​168 square meters.
In this task, which he began carrying out on Saturday and is expected to finish on Sunday, Bassil uses 3,000 chalks of the three colors that make up the Lebanese flag, red, white and green, after a topographical survey of the site in accordance with the conditions set by the Guinness Book of Records, which also notes that photos were taken of work with marches. Drone to ensure that the drawing is completed according to the required specifications.
He added, “I wanted the record to come out of this historic square in downtown Beirut,” and “I am proud of what I do despite everything the country is going through,” explaining, “I am trying to be a face of hope for all the Lebanese,” in light of the stifling economic crisis that hits various aspects of living. in the country.
The Lebanese painter dedicated this work to the victims of the Beirut port explosion, less than two weeks before the first anniversary of the tragedy that left more than two hundred people dead and thousands injured and destroyed large parts of the Lebanese capital.