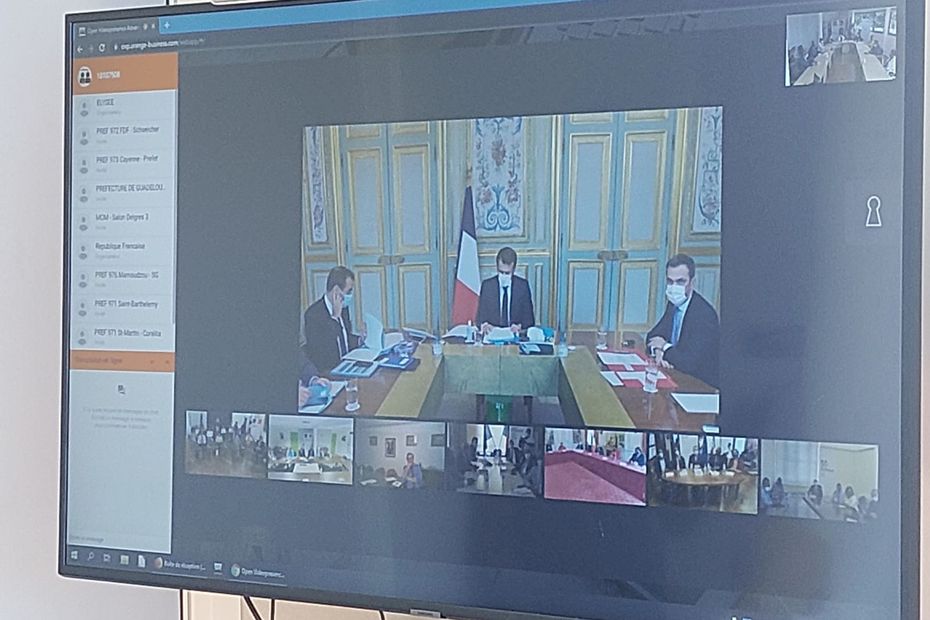 The Head of State responded to the insistent request from the various overseas territories, by offering local elected officials a moment of discussion. The local adaptation of measures to fight the Covid-19 epidemic was discussed, as well as many other topics, but succinctly.

The President of the Republic, Emmanuel Macron, exchanged by videoconference, this Thursday, January 27, 2022, between 10:30 a.m. and 1:00 p.m. (Guadeloupe time), with the elected representatives of several overseas departments and communities: Guadeloupe, Martinique, Guyana, Saint Martin, Saint Barthélémy, Reunion and Mayotte.
He was accompanied by the Ministers of Foreign Affairs and Health, Sébastien Lecornu and Olivier Véran.

The discussions focused mainly on the management of the health crisis linked to Covid-19, in these territories.

This meeting had long been requested by elected officials from overseas. They wanted the state to get more involved, while social protest movements are raging here and there, especially in Guadeloupe where a general strike against the vaccination obligation began on November 15, 2021.

These elected officials are asking for an adaptation of the measures to fight the epidemic, taking into account the reality on the ground. This is what the amendment made by the deputy Justine Benin (MoDem), during the examination of the “law strengthening the tools for managing the health crisis and modifying the public health code“.

Each territory had 10 to 15 minutes to speak. the Guadeloupe file has therefore only been touched upon.
Apart from the introduction by the president, this meeting was held behind closed doors.

The Head of State announced the main principles of his approach to the crisis:

Reunion, on the Guadeloupe side

Around the table, in the premises of the prefecture of Basse-Terre, to represent the archipelago, there were the presidents of the Region and the Department, Ary Chalus and Guy Losbar, the senators Victoire Jasmin, Victorin Lurel and Dominique Théophile , as well as the deputies Justine Benin, Hélène Vainqueur-Christophe, Olivier Serva and Max Mathiasin (some followed the meeting from Paris). The prefect, Alexandre Rochatte and the director of the Regional Health Agency, Valérie Denux were also at the rendezvous.

A second meeting was organized, at the end of this exchange, between the elected Guadeloupeans, within the Hôtel de Région, in the afternoon, to take stock of what was said.

Debriefing of Guadeloupe’s elected officials, following the videoconference with the President of the Republic – 01/27/2022

The specificities of Guadeloupe, in particular the stumbling blocks at the origin of the social crisis raging there, were presented by the elected representatives of the archipelago.
They mentioned the high cost of living, health, low wages, unemployment, the difficulties of integrating young people and, of course, the discontent against the vaccination obligation, which impacts suspended caregivers.

The elected Guadeloupeans who followed the meeting from Paris are waiting.
To (re) see the report by Nora Nonet, Nordine Besaid and Jean-Charles Théobald:

Difficult to believe in a backpedaling of the Elysée, on the obligation to vaccinate caregivers.

Emmanuel Macron, who relies on the “support for overseas elected officials“promised to exchange again, this time with each territory individually, within four to six weeks. This will then be an opportunity to propose solutions on the issues addressed.

To hear Guy Losbar, the president of the Department of Guadeloupe, we understand that the project started today, which has several components, is not ready to give results, on the ground.
At least, from his point of view, the President of the Republic is aware of the issues raised:

Guy Losbar, President of the Department

There is an important fact to take into account: will the looming presidential election weigh in favor of an acceleration of decision-making, or the opposite?

Unemployment: record drop in 2021 but beware of backlash