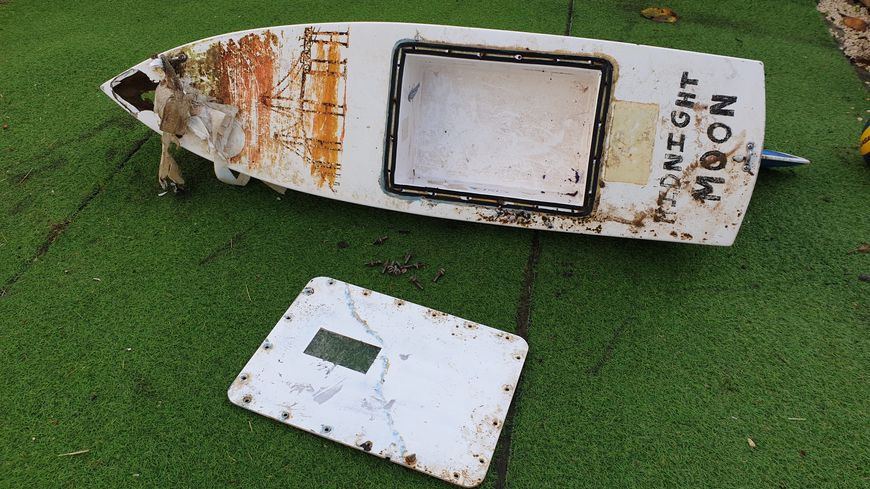 A small model sailboat, which sailed off New York on February 6, 2018, ran aground last November on a beach in Sainte-Marie-de-Ré. The boat was discovered by walkers on November 28, 2019, Thanksgiving Day, a few days after high tides.

It was Antoine Sirjean, a real estate agent who works between La Rochelle and Paris, who made this incredible discovery, while he was walking with his sister on the beach of Sainte-Marie-de-Ré, facing the Atalante . “The model was lying in the dune”, says Antoine, who himself did model making when he was young, before adding: “She was squatted by shells. “ The sailboat, which lost its mast during the crossing, measures 1.43 meters long by 41 centimeters wide and weighs around 30 kg. On the back of the hull we can still read the name of the boat “Midnight Moon” and on the bow, we can guess the remains of a drawn bridge, “probably the Brooklyn Bridge “ imagine Antoine.

There was a treasure in his box

When brought back to his sister’s garden in Sainte-Marie-de-Ré, Antoine cleaned the boat and discovered that it had a waterproof case. “The box was equipped with twenty screws which I removed with pliers to leave place in the treasure “, explains Antoine, a broad smile hanging on his lips. In the box, he found a plastic envelope with inside “two USB keys with videos, children’s drawings with flags of different countries, and bracelets still made by children“And then inside the boat, well hidden, a business card with the name of the company that carries the project with a school in the state of Rhode Island.

See Also:  the call "Tech for Good", or the declaration of goodwill of the digital giants

A message from Rhode Island

17 bracelets were carefully placed in a plastic pocket with which a message written in four languages, English, French, Spanish and Portuguese, had been slipped. The text says: “Hi, we made friendship bracelets for you, we are Madame Martinelli’s 4th class at Melrose School in Jamestown Rhode Island USA, we hope you like them.”

Thanks to the business card found, Antoine managed to reach the project leaders in the United States. The boat was launched on February 6, 2018 off New York. It had a GPS beacon, but after 345 days at sea it had stopped transmitting off the Azores, and the Americans thought their little boat was definitely lost. When they heard the good news they cried out “amazing”, “incredible” in French.