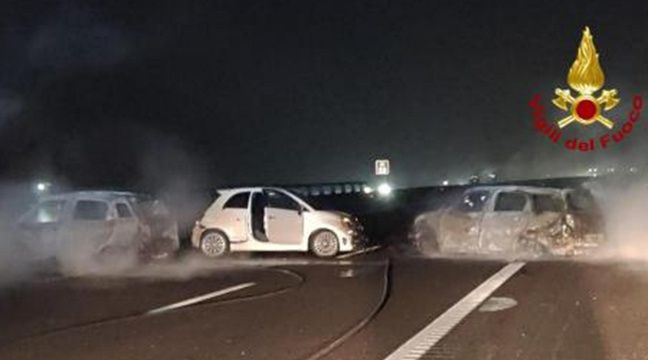 In Italy, a
Fund conveyor showed all the composure he was capable of. Attacked by criminals, Tuesday evening, he managed to save his precious load … by crossing a wall of burning cars.

The ambush occurred shortly before midnight on a stretch of highway between Milan and Lodi, a city located about thirty kilometers southeast of the Italian economic capital, according to firefighters and police sources quoted by the media. Italian. The perpetrators torched a dozen vehicles, all probably stolen, in both directions of traffic on the highway.

A previous attack with “wall of flames”

They also sprinkled the bitumen with nails and used a ram truck to try to ram the armored car, but the driver drove through the wall of flames and managed to find refuge at a nearby gas station. The amount of the sums transported has not been specified. The criminals, at least fifteen arrived in six or seven vehicles, also stolen – and later found burned along a country road – then fled, a patrol of road police being in the according to the daily newspaper Corriere della Sera. Highway traffic was interrupted for several hours on the highway.

All the media recalled that a similar attack had taken place in November 2014, just a few kilometers away, when criminals had created a wall of flame in an attempt to stop an armored van which was transporting five million euros, but without success. During this attack, too, the driver kept his cool and managed to escape.

See Also:  Coronavirus: For the first time in its history, the Boston Marathon is canceled