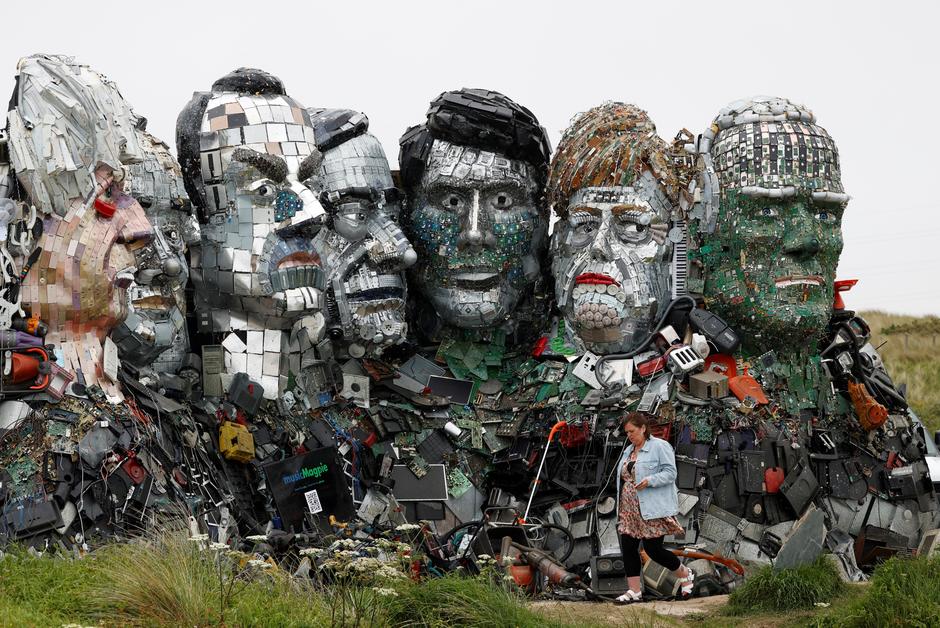 Friday 11 June, the leaders of the member countries of the G7 will meet in Cornwall, UK for their traditional annual meeting. To welcome them, sculptor Joe Rush created a sort of “Mount Rushmore” made of recyclable waste displaying their faces. An original way to encourage them to do more on ecological issues.

The faces of George Washington, Thomas Jefferson, Theodore Roosevelt and Abraham Lincoln have given way to those of Boris Johnson, Yoshihide Suga, Emmanuel Macron, Mario Draghi, Justin Trudeau, Angela Merkel and Joe Biden, but it’s just like. The “Mount Rushmore” effect is guaranteed.

Friday June 11, G7 (annual meeting which brings together the leaders of France, Italy, Canada, Germany, United States, United Kingdom and Japan) will begin in the United Kingdom and, for the occasion, the seven leaders will be entitled to a rather special welcome.

We are not talking about protocol here, but rather a work of art that has been erected near the hotel where the meeting will be held, explains the BBC :

This has been dubbed ‘Mount Recyclemore’ and its aim is to highlight the damage caused by the destruction of electronic devices. ”

As the name suggests, the sculpture mimics the famous Mount Rushmore, located in the United States, where the faces of four iconic American presidents are carved, but replacing them with the current rulers of the G7. Otherwise, recyclemore in English means “to recycle more”.

The artist who produced this work, Joe Rush, was commissioned by musicMagpie, a UK site for buying and selling used electronic devices and computer games.

The sculpture, teaches us the Washington Post, “Was made from scrap metal, keyboards, phones, circuit boards, iPads and computer monitors”. For Joe Rush, concludes the American daily, this work “Highlights the fact that more electronic devices need to be manufactured in such a way that they can be reused or recycled”.