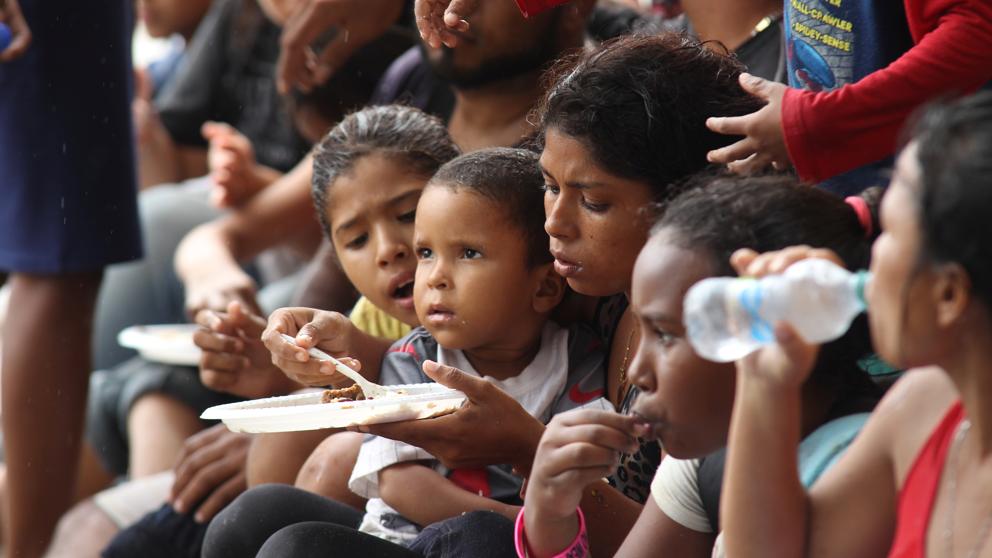 With a new Democratic administration poised to take the reins in Washington and before elections legislative impending in Venezuela that – despite the boycott of the opposition of Juan
Guaidó– may surprise the Government of Nicholas
Mature, a question runs through the ramshackle streets of Caracas. After the most serious economic depression in the history of Latin America and a hyperinflation that has impoverished eight out of ten citizens, could this be a turning point if Washington abandons its sanctions strategy and Venezuelan political forces opt for dialogue?

The Venezuelan economy was already in terrible shape before the US sanctions after successive double-digit falls in the START between 2015 and 2018, a significant decline in oil production and inflation that was already out of control. But since the Administration of Donald
Trump adopted an aggressive policy of “maximum pressure” through sanctions – first a battery of financial measures that prohibited buying debt from the oil company PDVSA; then in 2019, an embargo on all oil exports – economic activity has come to a halt.

In three years, 44% of GDP has been destroyed, with a total loss since 2012 of 74%. Annual hyperinflation reached a rate of 130,000% last year (according to official data that the IMF raises to a million).

on GDP. That is the public debt that Venezuela is estimated to carry, estimated at 175,000 million dollars

Since Venezuela buys most of its essential food and drugs with these currencies, the humanitarian crisis has been devastating. The United Nations estimates that one in five Venezuelans suffers from malnutrition. Although the Covid-19 pandemic has been managed responsibly, the embargo “will make Venezuela last in line when it comes to buying the vaccine,” says Luis Oliveros, an economist at the Central University of Venezuela. and author of a devastating critique of US sanctions published by the influential think tank Washington Office for Latin American Affairs (WOLA, in its acronym in English).

Maduro’s measures in response to the crisis are paradoxically reminiscent of the IMF’s old shock therapies. Price liberalization and the unification of multiple exchange rates were measures that private sector economists had been calling for. Even gasoline – almost free in Venezuela before – was liberalized and there are long queues to buy the small fee that is still subsidized.

To combat hyperinflation, a brutal monetary contraction was carried out, the extraordinary result of which is that liquidity in bolivars at the moment is only equivalent to 500 million dollars. That contraction had to be cushioned by the dollarization part of the economy. But due to the embargo, Venezuela’s ability to generate foreign exchange is almost nil. Anyone visiting Caracas quickly realizes that cash is impossible to get. All transactions in bolivars are made with bank cards. “You haven’t seen an adjustment like this since the 1970s in Chile,” says Gustavo Márquez, a former minister and Chavista dissident. “We have a medium economy dolarizada , but only a very small segment of the population has access to dollars ”.

Wages also plummeted. The minimum income –minimum salary plus a food voucher–, which was equivalent to about 700 dollars a month in 2012, has fallen to 1.2 million bolivars, which at the current exchange rate (last Thursday) is equivalent to a ridiculous $ 1.2 per month. To survive you have to “solve” – ​​as they say – looking for income in dollars.

The alternative is to wait for the so-called CLAP – a box of food and other essential goods provided every month or two by the state – or, as in the case of 5 million people in a country of 30 million, to leave.

The minimum income was equivalent to about 700 dollars a month in 2012, now it is 1.2 dollars at the change

Paradoxically, the sanctions, far from forcing Maduro’s downfall, seem to have facilitated his entrenchment in power. “It is proven that sanctions do not change anything, but in Miami they are unfortunately very popular,” says Oliveros. Trump and his Secretary of State, Mike Pompeo, even announced in the middle of the electoral campaign a new measure that prohibits swaps crude oil for diesel. “There will be a shortage of diesel, which will create problems for food production,” adds this economist.

Although they have liked the voters of Venezuelan origin in Florida, the sanctions have been rejected in repeated polls by the public opinion of Venezuela. A year ago, Guaidó insisted that the crisis was due to Maduro’s corruption and not the embargo. But this argument is no longer credible. “There have been very sharp drops in oil production after each package of sanctions,” says Francisco Rodríguez, a Venezuelan economist at the University of Notre Dame in Indiana.

The government’s latest desperate attempt to circumvent the embargo is the so-called Anti-Blockade law, which offers lone conditions for companies willing to invest in Venezuela. “They want to promise foreign investors that there will be opportunities to invest, buy privatized companies and that everything can be done with total and absolute anonymity to avoid sanctions,” says Oliveros. But anonymity also translates into opacity and lack of democratic controls. The law “leaves all decisions in the hands of the president, totally outside the Constitution,” warns Márquez.

Will a Democratic Administration under Biden’s presidency change strategy? Yes and no, answers Rodríguez. “Biden will want to keep the pressure on Maduro, because he has geopolitical objectives in the region, such as containing Russia, China and Iran. But Trump’s strategy of increasing the pressure has ended, it failed, “he says.

A good result will help the Venezuelan opposition – both conservative and dissident Chavismo – in the elections to the National Assembly on December 6. That would weaken not only Maduro, but also Guaidó and other radical sectors of the opposition more aligned with Trump’s strategy that have advocated a boycott. “There is a realignment of forces both in the opposition and in the government,” says Gustavo Márquez.

All of this could create the conditions for a policy change regarding sanctions. Both Oliveros and Rodríguez defend, as a first step, the adoption of a program to exchange humanitarian aid for oil. “That would help facilitate the reintegration of Venezuela into the world economy,” says Rodríguez. It also requires a restructuring of public debt, which can amount to 175,000 million dollars, almost 180% of GDP. In principle, this could be negotiated with bondholders in the United States as part of the new humanitarian plan, Oliveros argues.

But as long as the United States – and Europe – continue to recognize Guaidó as the legitimate president, a dialogue between Maduro and the opposition is essential to agree to a way out of the crisis and the end of the embargo. “The only way in which Venezuela can reestablish its external economic and commercial ties is through an agreement between Maduro, Guaidó and the rest of the opposition,” says Rodríguez. Biden must exert pressure on Maduro and Guaidó in favor of dialogue ”.