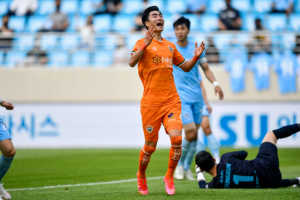 [강원도민일보 정승환 기자]Gangwon Provincial Football Club, Gangwon FC, failed to remove the stigma of ‘no win’ in the last match of the first half. Gangwon FC (CEO Lee Young-pyo) was held at DGB Daegu Bank Park on the 30th at Hanawon Q K League 1 2021 Round 19 Daegu FC. They lost 0-1 in the away match against and recorded a ‘draw’ in 9 matches (5 draws and 4 losses).

Gangwon FC performed well against Daegu FC, which was on an upward trend, sprinting undefeated (7 wins and 1 draw) in eight consecutive matches on that day, but fell down again with a painful own goal just before the end of the first half.

Gangwon FC started attacking Daegu FC with ‘rookies’ Yang Hyun-joon, Park Sang-hyeok and Seo Min-woo as the three tops on this day. In the midfield, Kim Su-beom-Kim Dong-hyun-Kim Han-young-Im Chang-woo formed a three-back, and the defensive line was Yun Seok-young-Kim Young-bin-Shinsegae. In the absence of the main players, Gangwon FC was expected to be inferior in this game, but Gangwon rather drove Daegu and led the game flow at the beginning of the game. Yang Hyun-joon and Seo Min-woo, who played with both wings, were digging into the opposing side. With a bold breakthrough, they threatened the opponent while aiming for the goal. Under such pressure, Gangwon FC took the ball possession 59-41 in the first half and pressed Daegu.

However, the winning goal came from an unexpected moment and unexpected place. In the 44th minute of the first half, Kim Su-beom was not able to handle the ball properly in the process of kicking Daegu FC’s free kick from the right wing, and the ball flew past Kim Su-beom’s head for the goal. The only goal and the winning goal from both teams of the day. Gangwon FC played a ‘hosou-bi’ throughout the first half and did not allow even a single on-target shot, which makes it even more disappointing.

At the start of the second half, Gangwon FC sent Silaj-Masa-Ji-Yong to increase the offensive rein and tried to pursue the chase, but in the end, they could not shake Daegu FC’s net and lost by one point. Daegu FC, which added three points, had 32 points. (9 wins, 5 draws and 4 losses) moved to 3rd place in the league, while Gangwon FC stayed in 9th place with 17 points (3 wins, 8 draws and 7 losses)

Gangwon FC will take a break for about a month and try again to escape the ‘draw’ in the 17th round match against Seongnam FC at 4 pm on the 26th of next month at Tancheon Sports Complex. Gangwon FC should have played 17 rounds with Seongnam on the 19th, but The match schedule has been changed due to the spread of COVID-19. Seunghwan Jeong