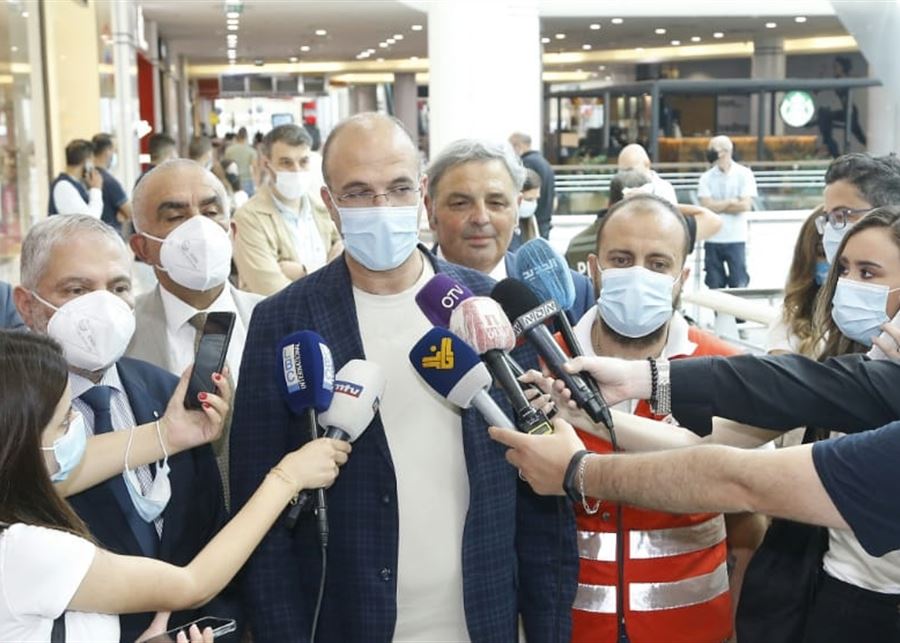 The Minister of Public Health in the caretaker government, Dr. Hamad Hassan, inaugurated today at noon the largest Mega Center for vaccination in Lebanon, managed by the Red Cross in City Mall – Dora, in the presence of the Prime Minister’s Advisor for Health Affairs, Dr. Petra Khoury, Chairman of the Board of Directors of ADMC City Mall, Michel. Abchi, Professor Salim Moghrebel of the Health Inspection, Director of Medical Care at the Ministry of Health, Dr. Joseph Helou, President of the Red Cross, Dr. Antoine Zoghbi, and representative of the Red Cross in the European Committee of the Palm League..

After the minister’s tour and the attendees at the center, Minister Hassan considered in a speech that “this step will urge citizens to carry out the vaccination process, especially since it is far from the atmosphere of hospitals and health centers and at the same time is very safe with the presence of doctors and the Red Cross.”

He thanked the City Mall administration and the associations that helped establish the Mega Center, stressing that it is “capable of accommodating between one thousand and five thousand people per day, which is a record number. It is a pioneering step that no one in the world has taken, which serves the Ministry of Health and Citizen Immunization.” at the required speed.

Minister Hassan stressed that “this step will include the rest of the Lebanese cities and regions, and according to the end of September.” He said: “According to the plan set for the Marathon next Saturday and Sunday, we must reach twenty or even twenty-five thousand people. As for people younger than 55 years old, there is a plan that is being studied in the Ministry with the Executive Committee, and we will have a weekly five-year downswing with a studied process and according to the data on the As for the private sector, we have succeeded in securing Pfizer vaccines for them from the agent, and there are 30 institutions and companies that will be with us and will help us to immunize the whole community, including young people and different age groups.”

Medicine
On the subject of medicine, the minister stressed the “necessity of cooperation to solve the problem, provided that everyone bears their responsibilities. When the capabilities became available, the Ministry of Health was able, with all partners, to bring the community to safety, step by step. The issue of medicine is very sensitive, and there is an official and he must bear responsibility and be responsible for The numbers he gives. We, as a ministry, have more than one scenario, but we need an accurate number to start with. There is the Governor of the Banque du Liban on the one hand and the various political parties on the other, it is required to enact the required laws. And there are those who must bear what the country has reached in this matter “.

He added, “Within 12 days, we visited 36 warehouses of drug importers and agents. It became clear to us that there is a quantity between twenty and twenty-five percent of the medicines in pharmacies being disposed of in varying proportions. We, as a ministry, will take the required measures because the situation is no longer bearable.”

Regarding the liberation of medicine, Minister Hassan said: “The World Bank report does not advise lifting subsidies on medicine in Lebanon in light of the existing living crisis before 2023. We cannot take unthoughtful steps, and we are waiting today for the regulations supported by the Banque du Liban, through which we received Warehouses are assets in order to work in accordance with the law and within realistic procedures so that the executive procedures and in cooperation with the judicial authorities in the country.

As for Al-Zoghbi, thank you to the minister for his efforts and support in the name of the Red Cross, after securing all vaccines within the national plan established by the National Committee for Corona. He also thanked the private sector, which helped equip the center.