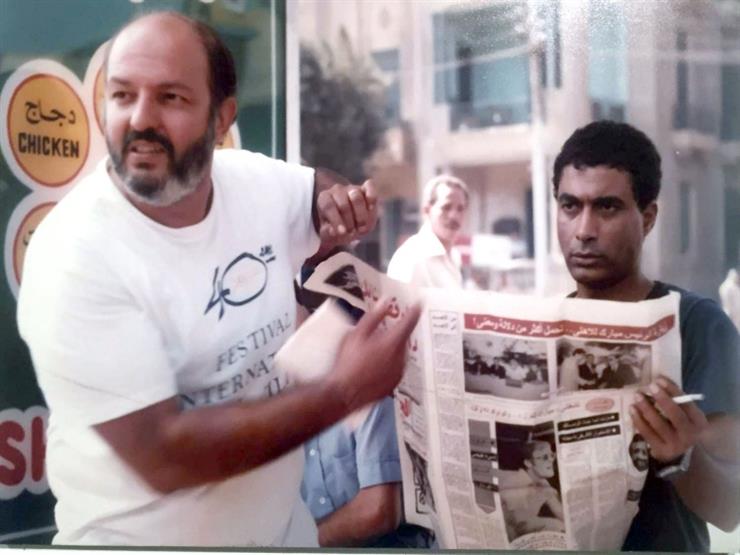 “Ahmed Zaki” was always the first candidate to star in director Muhammad Khan’s films, however, the director remained in a constant struggle with his favorite hero, and before and during the filming of the six films that they presented together, the scenes of the work were full of battles between the two friends, and it came to the point that the hero threatened the director with a knife. In the movie, the duo exchanged street beatings backstage at another act.

With the fifth anniversary of the death of director Muhammad Khan, who passed away on July 26, 2016, we reveal some of the 6 films that he directed and starred in Ahmed Zaki, the Days of Sadat in 2001, Mr. Karate in 1992, Dreams of Hind and Camelia in 1988, And the movie The Wife of an Important Man in the same year, A Dinner Date, and A Bird on the Road (1981).

And about the conflict that erupted in 1988 behind the scenes of filming the movie “Dreams of Hind and Camelia”, which co-starred with the actresses Naglaa Fathi and Aida Riad, the critic Tariq Al-Shennawi spoke and in statements to Al-Arabiya in September 2017, Ahmed Zaki Shaar said during the filming of the movie “Hind Dreams”. And Camelia” (1988), that the area of ​​Najla Fathi and Aida Riad is larger than him, so he was upset and discussed the issue with the director, but the discussion with Muhammad Khan developed into a clash that prompted Ahmed Zaki to try to attack him with a knife, before the situation was controlled.

In 1992, director Muhammad Khan found himself in an embarrassing situation when filming the movie “Mr. Karate”, starring his wife, the artist Nahla Salama, in front of the artist Ahmed Zaki.

During her appearance on the “Sheikh Al-Hara” program, Nahla Salama spoke with director Enas Al-Deghaidi about this, and said, “During the filming of one of the romantic scenes between me and Ahmed Zaki, Muhammad Khan left the filming site and refused to direct the film, leaving the matter to the director of photography. It was a kiss that brought me and me together. Ahmed Zaki”.

slandered because of “the cayenne”

In 1984, when filming the movie “The Harp”, a dispute arose between Khan and his favorite hero, before he was excluded from work and awarded the championship to his competitor, artist Adel Imam.

And about this crisis, director Muhammad Khan spoke on the “With You” program, and said: “I saw the hero of the work with a mustache and long hair, and I was surprised when filming that Ahmed Zaki came after completely shaving his hair, and I decided to replace him and give the role to the artist Adel Imam.”

He continued, “When I told Zaki that I gave the role to an imam, he asked me to enter the bathroom, and after years, he said I entered the bathroom to insult you.”

During the filming of the movie “Sadat”, which is the last work that brought the two friends together, the scenes of filming were on a date with the differences between Khan, and Ahmed Zaki, the hero and producer of the film, and it came to the point that they exchanged complaints at the Film Professions Syndicate, and Ahmed Zaki pointed the pistol in Muhammad Khan’s face. .