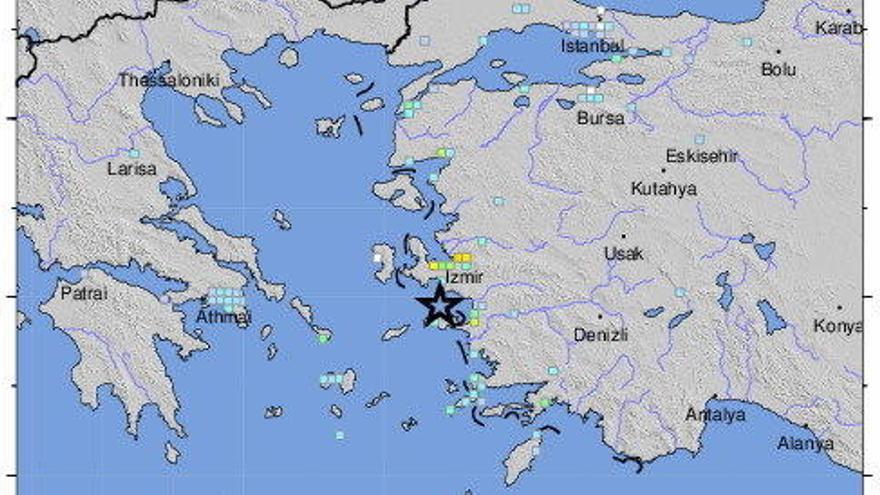 The place where the earthquake occurred.
EFE

An earthquake of magnitude between 6.6 and 6.8 on the Richter scale shook this Friday the Greek island of Samos, in the east of the country, and the Aegean coast of Turkey, as reported by the Geodynamic Institute of the National Observatory of Athens and the official Turkish agency Anadolu.

Apparently in both countries the existence of victims has not been confirmedAlthough local media speak of significant material damage in both Greece and Turkey, including the collapse of several buildings.

In Greece, the earthquake reached a magnitude of 6.6 on the Richter scale and It occurred at 1:51 p.m. local time (11.51 GMT), as reported by the Geodynamic Institute of the National Observatory of Athens.

The earthquake was felt in Turkey with a magnitude of 6.8, according to the official Anadolu agency, which assured that it affected the Aegean coast, causing serious material damage, although at the moment no victims have been reported. In the case of Greece, several testimonies from islanders on Helena public television, ERT, mention significant material damage in the area.

The epicenter of the earthquake is located in the aegean sea, about 17 kilometers from the Seferihisar district, in the Turkish city of Izmir. The shaking has been noted in much of the western provinces of Turkey and the nearby Greek islands.

The governorate of the Turkish province of Izmir has stated in a statement that, at the moment, no victims have been reported, although at least 10 buildings have collapsedor in the Bayrakli neighborhood, according to the NTV station.

“There are buildings that have collapsed, but for now we cannot speak of injuries or deaths. We are investigating it,” Büsra Gökçe, an official of the Izmir city council, told Efe by phone.

For its part, the CNNTürk station reports on five strong aftershocks of the earthquake. “I was in a restaurant. We are terribly shocked. We run away, a building has collapsed before my eyes“Businessman Özgür Aktepe, who lives in Izmir, told Efe by phone.

The earthquake lasted more than 30 seconds in the Greek area and has been felt throughout the country, including the capital, Athens, which is more than 300 kilometers from Samos, according to the vice mayor of that town, Mijalis Mitsiós, told ERT.

Greek Civil Protection has sent a warning of a possible tsunami through the emergency service 112 and the regional government of the North Aegean asked the neighbors to avoid driving on roads parallel to the sea.

The earthquake had a focal depth of 10 kilometers. According to the professor of Geodynamics at the University of Athens Efthymios Lekas, although it is still too early to know for sure, it is likely that it is the main earthquake and later there will only be replicas.