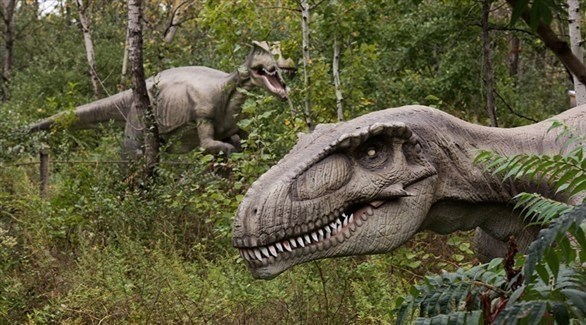 The decline of the dinosaurs began as the planet became colder long before the fall of the asteroid that ended its era 65 million years ago, according to a study published Tuesday.

The scientific community is unanimous that it is this space body that has caused the extinction of these animals, since the giant crater caused by the impact of the meteor was discovered in Mexico in 1980.

Two hypotheses for the extinction of the dinosaurs

The impact resulted in a shock wave that was so strong that it caused a cloud of dust and gas that enveloped the planet, which led to climate disruption and the extermination of three quarters of species, including non-avian dinosaurs.

But the debate among paleontologists revolves around whether this mass extinction occurred suddenly, or whether the asteroid dealt these animals the final blow, given that they were already in a regressive phase.

The author of the study, published in “Nature Communications”, biologist Fabian Condamine told AFP that the available data are not solid enough to favor one hypothesis over the other.

The researcher at the Institute of Evolutionary Sciences in Montpellier (France) explained that “the fossil record (i.e. dinosaur bones) is incomplete, and its preservation is poor, and there are certain geographical regions, such as the tropics, from which information is not available equivalent to what is available from other regions, in addition to the existence of data from periods of a certain period of time more than another.

A new method of statistical modeling

The researcher and his team, which includes French, English and Canadians, used a new method of statistical modeling called “Baisian” in an effort to correct this situation. It calculates the probabilities of causes based on the study of known elements.

The researchers chose 1,600 fossils belonging to six families of dinosaurs, including the famous ones such as tyrannosaurs, triceratops and hadrosaurs that became known through the movie “Jurassic Park.”

Among these six families are three herbivores and the same carnivore, including 247 species. Each fossil was given a code that allows tracing the successive diagnoses that scientists have reached since its discovery.

Thanks to this method of statistical modeling, scientists were able to determine the date of the emergence and extinction of each species, over a period of time that extends from the end of the Cretaceous period 145 million years ago to the stage before the disaster, that is, 66 million years ago.

As a result, it was found that “diversity peaked 76 million years ago, and the rate of formation of new species was high at that time, and then began a slow decline,” explains Fabian Condamine.

It was noted that the number of dinosaur species decreased from about 50 to less than 20 66 million years ago, over a period of ten million years, a period much longer than the period of hominins to which the human race belongs.

The results showed a perfect correlation with the climatic curves, as “the higher the rate of species extinction, the lower the temperatures,” according to the expert in macroevolution.

This large increase in coldness, which led to a loss of temperatures on Earth between 7 and 8 degrees, was taking place exactly in parallel with the decline in the presence of dinosaurs. “It was much warmer at that time, and there were palm trees and mangroves in the Bering Strait” between Siberia and Alaska today, Fabian Kondamine explained.

However, dinosaurs could not produce their own body heat, as humans do, and were highly dependent on their environment for food, movement, and reproduction…so their metabolism was not adaptable to change.

Another important factor is that the first extinctions affected the herbivorous dinosaurs, about two million years before they included the giant carnivores.

Thus, the scarcity of herbivorous dinosaurs that were prey to these carnivores may have upset the balance of ecosystems and caused successive extinctions among other dinosaur families, according to the study.

And when a meteorite with a diameter of 12 kilometers hit the Earth, the existence of dinosaurs was already reduced, and they could not recover from this disaster, unlike what some small mammals did.