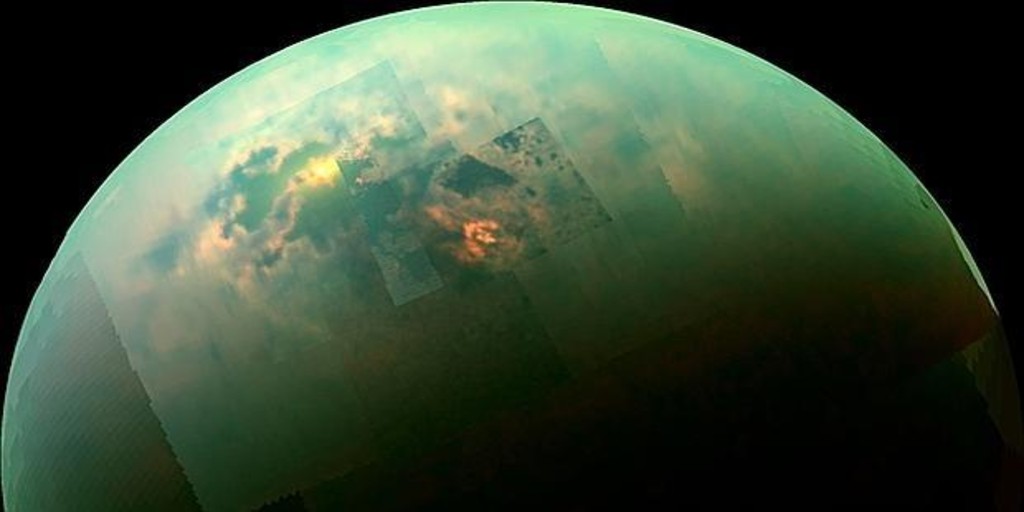 Titan, Saturn’s largest moon, is the only place in the solar system, other than Earth, with a thick atmosphere and stable liquid on its surface. Covered by rivers and seas of liquid methane, it intrigues scientists, who even plan to send a submarine there to investigate its mysterious basins. Now, astronomers at Cornell University have estimated that Kraken Mare, the largest sea in the world, is at least 300 meters deep near its center, enough space to submerge the Eiffel Tower in Paris and, what is much more interesting , to be explored by a robotic contraption.

After examining data from one of the latest Cassini flybys on Titan, the researchers detailed their findings in a study published in the “Journal of Geophysical Research.”

‘The depth and composition of each of Titan’s seas had already been measured, except for the largest sea, Kraken Mare, which not only has a great name, but also contains about 80% of the surface fluids of this moon, ”says Valerio Poggiali, a researcher at the Cornell Center for Astrophysics and Planetary Sciences (CCAPS) and lead author of the report

The icy Titan is shrouded in a golden haze of nitrogen gas. But when looking through the clouds, the lunar landscape looks similar to Earth, with rivers, lakes and seas of liquid methane, according to NASA.

Data for this discovery were collected in Cassini’s T104 flyby on August 21, 2014. The spacecraft’s radar scanned Ligeia Mare, a smaller sea in the north polar region of the Moon, to search for the mysterious “Magic Island. »That disappeared and reappeared.

As Cassini cruised at 21,000 km per hour at nearly a thousand kilometers above the surface of Titan, the spacecraft used its radar altimeter to measure the depth of the liquid in Kraken Mare and Moray Sinus, an estuary located at the northern end of the sea. Cornell scientists, along with engineers at NASA’s Jet Propulsion Laboratory (JPL), had figured out how to discern the bathymetry (depth) of the lake and the sea by observing the radar return time differences on the liquid surface. and the seabed, as well as the composition of the sea by recognizing the amount of radar energy absorbed during transit through the liquid.

The origin of methane

It turns out that Moray Sinus is about 85 meters deep, less than the depths of the center of Kraken Mare, which was too deep for the radar to measure, so they deduce that it is at least 300 meters. Surprisingly, the composition of the liquid, primarily a mixture of ethane and methane, was dominated by methane and was similar to the composition of nearby Ligeia Mare, Titan’s second-largest sea.

Previously, it had been speculated that Kraken could be richer in ethane, both because of its size and because of its extension to the lower latitudes of the moon. According to the scientists, the observation that the liquid composition is not markedly different from the other northern seas is an important finding that will help evaluate models of Titan’s Earth-like hydrological system.

An enigma is the origin of liquid methane. Titan’s sunlight, about 100 times less intense than Earth’s, constantly converts methane in the atmosphere to ethane. Over periods of about 10 million years, this process would completely deplete Titan’s surface reserves, according to Poggiali.

The researcher believes that in the distant future, a submarine, probably without a mechanical engine, will navigate Kraken Mare. “Thanks to our measurements,” he says, “scientists can now infer the density of the liquid with greater precision and, consequently, better calibrate the sonar on board the ship and understand the directional flows of the sea.”