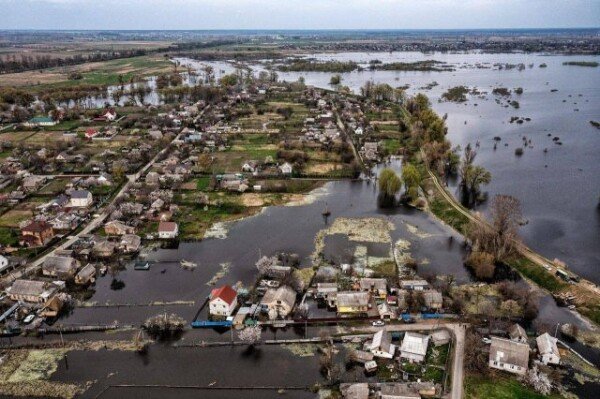 It was later revealed that a village in the Ukrainian capital, Kiiu, helped to slow the advance of Russian troops by deliberately opening a dam’s floodgates and causing flooding.

According to the New York Times (NYT) on the 27th (local time), Demidiou, about 40 km north of the Ukrainian capital Kiiu, was submerged in water on February 25, two days after Russia invaded Ukraine.

This is because the Ukrainian army opened the floodgates of the Arfin Dam near the area and deliberately flooded the area to prevent the advance of the Russians. This created lake-shaped puddles throughout the village, preventing Russian tanks and armored vehicles from entering, and giving Ukrainian forces ample time to defend Kiiu.

Surrounded by the Dmitro River and its tributary, the Irfin River, which run through Ukraine’s territory from north to south, Demidiou was flooded with 50 out of 750 households in the village due to the discharge from the dam. To make matters worse, the dam was damaged by Russian shelling, and drainage work was disrupted, and the village has been recovering from flood damage for two months.

Residents move in and out of the house in rubber boats or with wooden planks on the muddy yard. Mold has grown all over the house, and even though wet furniture and towels are laid out to dry, they say, “I don’t regret opening the dam. We saved Kiiwu,” he said proudly.

The floods not only deterred Russian troops from entering Kiiu, but also protected Demidio residents, the New York Times reported. At that time, as the Russian army detoured to other outlying areas such as Hostomer, Bucha, and Irfin, an all-out war did not take place in Demidio, and mass casualties were avoided.

On the other hand, the Demidiou flood is not an exceptional case. At the beginning of the war, the Ukrainian army deliberately destroyed its own infrastructure, such as bridges and roads, to make up for its weakness in power and to slow the advance of the Russian army toward Kiiu. So far, more than 300 bridges have been destroyed across Ukraine, Infrastructure Minister Oleksandr Kubrakov said.

“Doctor Thira” updates information about COVID-19, revealing that Thailand has been in the top 10 of the world for 42 days.

The latest poll of 50,000 people was unexpected after Chen Shizhong was arrested and blocked from donating tens of millions of quick screening agents-Politics-Zhongshi News Network