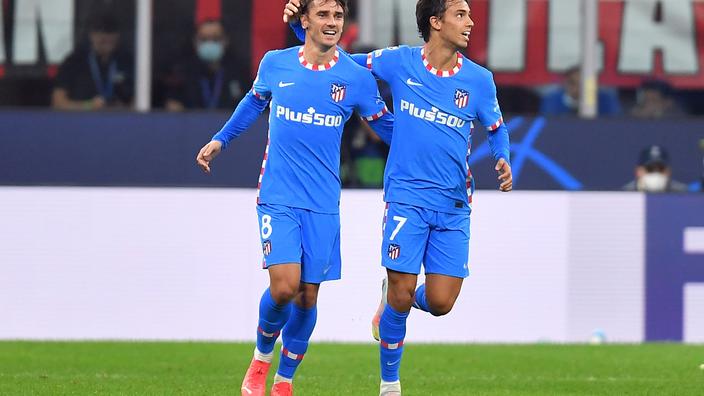 Cruel for Milan! Heroic ten against eleven, the Rossoneri cracked late in the match (1-2) against Atlético Madrid on a goal from Antoine Griezmann (84th) and a penalty from Luis Suarez in the 97th minute, for their return to the League champions in San Siro. Before this final turning point, launched by the first goal of “Grizou” since his return to the Colchoneros, the match had changed at half an hour, when Franck Kessié had received a second yellow card (perhaps severe) for a late intervention.

AC Milan, who started off with their feet to the ground and in the lead thanks to Rafael Leao (20th), was then forced to play in defense, which is not the best asset of Stefano Pioli’s enthusiastic team. Defending, she did it valiantly, with a line of five, even sometimes six defenders in front of Mike Maignan. For a long time, the Madrilenians were kept away from his cage, unable to catch the frame.

But the hunger of Griezmann, still on the bench at kick-off as in the first match against Porto (0-0), made the difference when he entered on the hour mark: his volley from the left handed the Atlético in the saddle. And Luis Suarez, so far clumsy (45 + 1st, 53rd), sealed the victory after a hand in the area of ​​the Milanese Pierre Kalulu. To the delight of the hundred Atlético supporters installed at the top of San Siro, in the third ring.

Atlético take a first precious victory in this tough group. With two defeats (after Liverpool 2-3), AC Milan will have a hard time, victim of its lack of experience. However, it was time to celebrate at the kick-off: “Finally we are back at home!”, Proclaimed the announcer before the entry of the teams, in a roaring San Siro of happiness, for this first match of C1 at home for more than seven years.

The most recent was in February 2014 and it was already against Diego Simeone’s Atlético Madrid, resulting in a victory for the Spaniards, already (1-0). Carried by such momentum, the Rossoneri started very strong, led by a Gala Brahim Diaz. In a particular match for him (he is on loan from Real Madrid), the talented Spanish N.10 did everything to the Colchoneros for twenty minutes.

His choice to shoot full axis (17th) was probably not the right one but he then offered two caviars: Ante Rebic, perfectly launched in depth, lost his face to face against Jan Oblak (19th), but Leao did not did not miss the target (20th). But once Milan has been reduced to ten, deprived of its too generous fighter Kessié, and with a Diaz quickly running out of gas, the scenery has obviously changed. Everyone had to defend, including Olivier Giroud who sacrificed himself like everyone else after coming into play (57th). But it was not enough. Atlético have won again, like seven years ago.