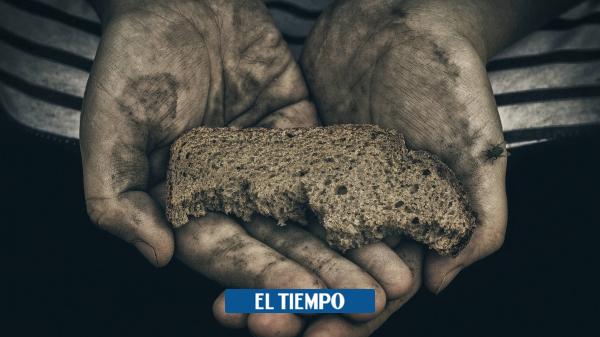 Economic instability, displacement, violence and political instability would be the four risks that would trigger the acute food insecurity in Colombia in the coming months, according to a recent report by the Food and Agriculture Organization of the United Nations (FAO) and the UN World Food Program (WFP).

The country, along with 24 other nations such as Honduras, Angola or the Sahel region (which includes Burkina Faso, Chad, Mali, Mauritania and Niger) was reviewed in the report ‘Critical points of the hungry: FAO and WFP Early Warnings on Acute Food Insecurity’.

A person is food insecure when they lack regular access to enough safe and nutritious food for normal growth and development and to lead an active and healthy life. This may be due to the unavailability of food and/or the lack of resources to obtain it. This can be experienced at different levels of severity.

(Also read: This is how Colombia and the Netherlands work to make agriculture sustainable)

The document, which measures food insecurity under 8 risks, such as economic instability, tropical cyclones, locust damage, or flood damage, among others, warns that from February to May 2022 there could be acute hunger in these areas “unless immediate action is taken.” These risks could affect the capacity for food production or movement in certain areas of each country.

According to the FAO and the WFP, the majority of territories that could suffer from this scourge are in Africa; being, in fact, Ethiopia, Nigeria and South Sudan three of the four countries with the highest risk. The list is completed by Yemen. “In the latest available assessments, all of these countries had parts of the population identified or projected to experience starvation and death, which require more urgent attention,” the report states.

In the case of Latin America and the Caribbean, Colombia it appears along with Honduras and Haiti as the only three countries listed. “Haiti’s current economic crisis, characterized by a weakening currency and rampant inflation, has further reduced the purchasing power of many poor and vulnerable households. While in both Honduras and Colombia, despite the gradual recovery from the 2020 contraction, reduced employment opportunities coupled with rising prices and declining purchasing power, are worsening the economic losses generated by the pandemic” , emphasizes the document.

To deal with this scourge, there is in the country the Intersectoral Commission on Food and Nutritional Security, created to strengthen the governance and coordination mechanisms of the governing entities of the policy. The Ministries of Health, Environment, Agriculture, Education, Finance, Commerce, as well as Family Welfare and National Planning are part of it.

The Minister of Agriculture, Rodolfo Zea, explained the actions that the government has been carrying out against this scourge. According to the official, “as the National Government we have focused our efforts on maintaining the normal functioning of the entire food supply and supply chain, despite the restrictions generated as a result of the pandemic, with which we have managed to guarantee food security in throughout the national territory and bring food to the table of Colombians, allowing the mobilization of the entire primary sector and the rest of the chain”.

(We recommend: In 2022, climate and biodiversity will be the central theme)

Colombia appears classified as one of the eight countries with “very high limitations of access” to food for its citizens and migrant inhabitants. According to the FAO, the country faces this problem especially in areas where there is an armed conflict, and would be accompanied by other States such as Somalia, which it faces due to military hostilities, bureaucratic impediments and impassable roads; or the Democratic Republic where new military operations and deteriorating security are expected to affect humanitarian assistance.

The reasons, according to the document, are the delays in the application of the 2016 peace agreement between the Government and the armed groups that has caused new waves of violent attacks, with 61,000 new internally displaced persons between January and September 2021, three times more than in 2020. “Unrest caused by social unrest and economic disruption is likely to continue amid the electoral processes scheduled for the first half of 2022. This could contribute to continued high levels of displacement in the coming months” , highlights the document.

In addition, according to the document, the pandemic caused by covid-19 has further amplified existing disparities and its economic effects will continue to affect vulnerable households, despite an economic rebound in 2021 and an expected GDP growth of 5.5 percent. cent in 2022.

(You may be interested: Electronic waste is a growing problem in Latin America: UN)

“Although pandemic-related job losses have almost fully recovered, the unemployment rate remains high, at over 11 percent in October 2021. Inflation is also a concern, which stood at 12.4 percent. year-on-year in September 2021, and that it will probably continue to affect the purchasing power of vulnerable households”, he points out.

Among the recommendations that the report delivers with actions to prevent this problem from occurring in the country are distributing money transfers to the most vulnerable people in rural and urban areas, to mitigate the impact of the expected increases in food prices of food prices on food security.

(Also read: What are the 9 limits that keep the Earth in balance)

In addition, the FAO and the WFP also recommend providing food assistance and agricultural inputs (seeds, fertilizers and materials) for rapid, diversified and secure food production in rural, urban and peri-urban contexts, to close the food gap of people affected by the conflict/violence, social crises and other economic shocks.

In this regard, the Minister of Agriculture pointed out that on the issue of agricultural supplies, in 2020, in order to start reactivating the economy in the countryside, almost $30,000 million were allocated to support small producers in the provision of these products.

“In addition, in 2021 we managed to carry out the Agricultural Inputs Law, which will seek to improve access to the input market for small producers, through different bets such as a fund, which this year will have resources of more than $70,000 million to support it. directly to our farmers; additionally achieving a 0% tariff for imports of agro-inputs, in order to reduce costs and improve the profitability of our producers,” explained the official.

Another of the key actions according to the report is “increasing household income and local employment, preserving agricultural livelihoods and mitigating inflation that affects access to food, supporting the supply chain to local markets” .

In this regard, Minister Zea pointed out through the Rural Development Agency, the current government has invested $63,028 million for the rehabilitation of irrigation and drainage districts that impact 87,044 hectares (92% of the four-year goal). Thus benefiting 20,512 Colombian rural families.

“During the entire Government of President Duque, we have generated more than 50,000 rural property titles throughout the Colombian territory, equivalent to more than 1,177,000 regularized hectares for more than 60,000 families of the country’s peasant and ethnic population. This Government has incorporated in the Land Fund a total of 1,429,000 hectares, of which we have delivered through it around 448,000 hectares, which benefit the rural population and contribute to the fulfillment of the Peace Agreements”, emphasized the head of the portfolio of Agriculture.

Silence on joue ! «Not for Broadcast», «Vampire Survivors», «The Longest Road on Earth», «Pupperazzi» – Libération