Munich From high-flyer to survivor: Adidas– Chef Kasper Rorsted only had a few days this spring to completely switch over. When the corona virus spread rapidly in the western world in mid-March, the company’s record hunt came to an abrupt end. Instead, the 58-year-old switched to crisis mode.

A look at the semi-annual report shows: Europe’s largest sports company was hit hard by the consequences of the pandemic. The shareholders do not have to worry about the continued existence of the company. Because Rorsted has taken precautions to survive a longer lull.

When the ex-boss of Henkel presented the latest quarterly figures last Thursday, he had a reassuring message. “We see light at the end of the tunnel,” emphasized the native Dane twice.

Rorsted may also try the picture on Tuesday at the general meeting. For the first time, Adidas does not personally invite its shareholders. The shareholder meeting takes place purely virtually. A confident outlook should please the owners. After all, they not only have to forego the Franconian sausages, but also the dividend.

The first half of the year, however, did not go as Rorsted had imagined. Sales fell by a good quarter to around 8.3 billion euros. This was mainly due to the fact that three quarters of all stores of the brand were closed at times in April and May – and so were those of the independent sports stores. Adidas did not do quite as well as its local rival Puma. The smaller competitor’s revenues fell by just 16 percent.

Restrictions around the world have left sporting goods manufacturers stuck with tons of shirts, shorts and shoes. As of June 30, Adidas had inventories worth 5.2 billion euros, almost half more than in the same period last year.

That will continue to burden the group for a long time. The brand with the three stripes will have to sell a large part of this product at reduced prices in its almost 1,100 factory outlets over the next few months. However, Chief Financial Officer Harm Ohlmeyer promises that stocks will be at a normal level by the end of the year. “We have now reached the climax,” said the manager.

Some of the surplus products will not get rid of Adidas until next year, if at all: the jerseys that the national teams wanted to wear for the European Football Championship in June. The event was postponed due to Corona. The jerseys are set to hit stores when the 2021 tournament takes place as planned. If not, the junk box is the last resort.

Puma also managed better in terms of inventories in the first six months of the year. The brand with the predator logo shows stocks as of June 30th, only 21 percent higher.
Because of the slump in sales, Adidas slipped deep into the red. The loss from continuing operations amounted to 286 million euros in the first half of the year.

Last year, Rorsted had posted a profit of almost 1.1 billion euros at this time. With an operating margin of 13.3 percent, the group was highly profitable at the time and on a par with the world market leader Nike, the role model when it comes to returns.

Rorsted has already saved wherever possible. He put almost 200 million euros less into marketing than in the previous year. Less was also spent on IT projects, said CFO Ohlmeyer.

Until March, it was hard to imagine that Rorsted would put an emergency on the brakes. Because the starting position for 2020 was brilliant. Last year Adidas had improved in many ways. Sales climbed eight percent to 23.6 billion euros. A new record. The operating margin rose 0.4 percentage points to 11.3 percent. The bottom line was a good 1.9 billion left, twelve percent more than in the previous year.

Rorsted had achieved the goals he had set himself. Had Corona not got in the way, CFO Ohlmeyer would have paid out 800 million euros as a dividend after the general meeting in May, 100 million more than in 2019. He had also planned to buy back shares for one billion euros. It won’t come to that for now. 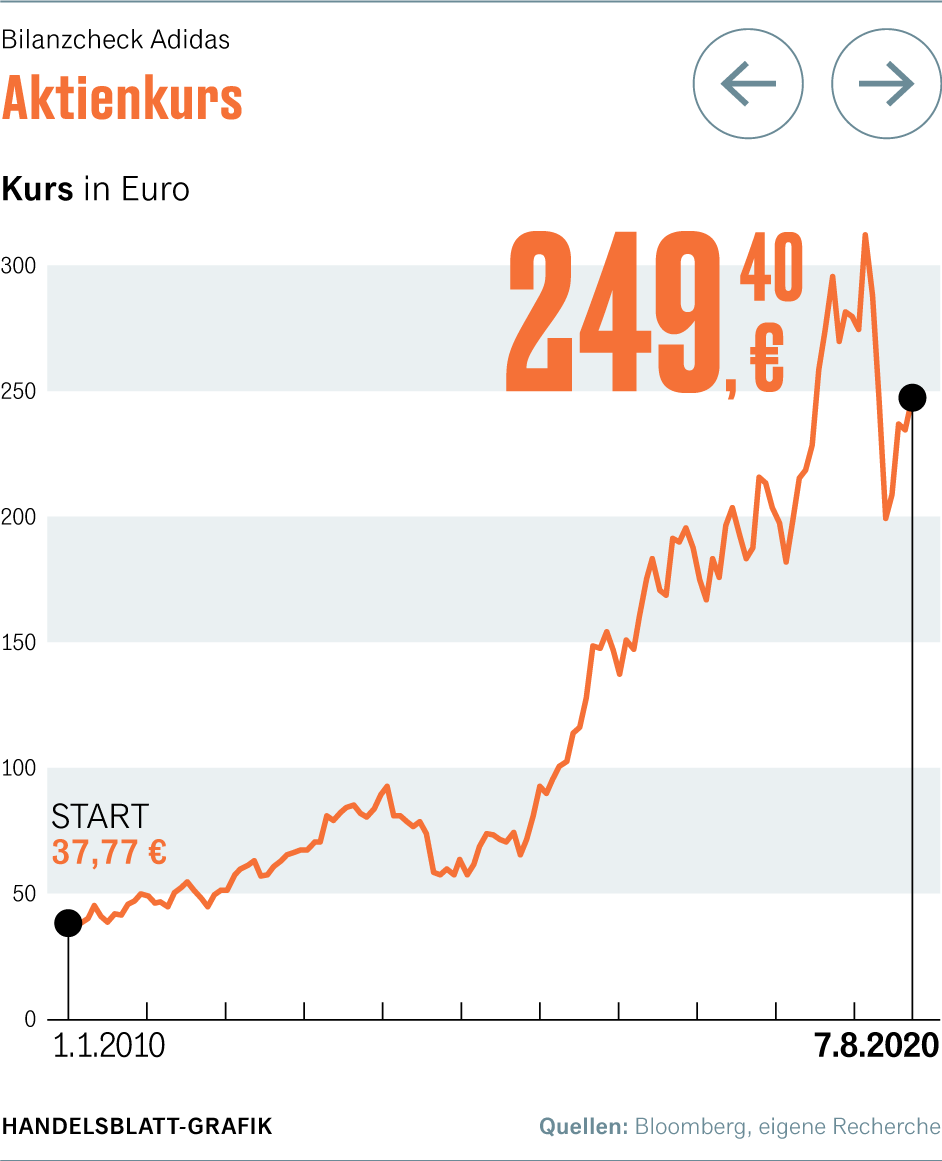 But that’s not all: If Corona had been limited to China, Adidas would probably have set new records in 2020. A few days before almost all stores in the western world closed, Rorsted had forecast a brilliant business. The Dane announced an increase in sales of up to eight percent, a profit increase of up to 13 percent and a significantly higher operating margin. And that, although at that time the business in the important Chinese market had been standing still for weeks.

Instead, Rorsted secured loans of three billion euros right at the beginning of the corona crisis. 2.4 billion of this comes from the state-owned development bank KfW. So far it hasn’t turned out as bad as Rorsted feared. Adidas has only called up 500 million euros so far, said Ohlmeyer. As of June 30, Adidas had cash and cash equivalents of around two billion euros. That is a fifth less than last year, but still a solid cushion.

After deducting all debts, the group still had 329 million euros in the account at the end of June 2019. This year on June 30th net financial liabilities amounted to 792 million euros. This is not as threatening as it seems at first glance. At the end of 2015, the group was in the red with 420 million euros, without a crisis. However, Adidas had to accept a high cash outflow from operating activities in the first half of the year of 824 million euros.

In the crisis, the worst seems to be over

Adidas could be in a much better financial position today: In 2018, Ohlmeyer bought back its own shares for one billion, last year for 800 million. In the two years before Corona, he also distributed 1.2 billion as dividends. All in all, this corresponds to three billion euros and thus the amount that Adidas secured as a loan from KfW and commercial banks this spring.

Neither the share buyback program nor the distributions were criticized before the Corona. Politicians and consumers only pilloryed Adidas when the company announced in April that it would withhold rent for its stores. A decision that Rorsted quickly revised and for which he apologized.

The rating agencies see Adidas as positive despite the deep red numbers. Standard & Poor’s and Moody’s have taken a close look at the company over the past few months. The Swiss francs received investment grade ratings from both companies for the first time. Standard & Poor’s gave Adidas an “A +” rating with a stable outlook. Moody’s rated the company “A2” with a stable outlook. With these ratings, Adidas is one of the best rated companies both in Germany and in the sporting goods industry, according to the group.

As it currently stands, Adidas has the worst of the corona crisis behind them. “We expect a significant recovery in the third quarter,” said Rorsted last week. He is assuming that sales will increase significantly in the third quarter, but will be five to nine percent below the previous year’s level. The operating result should be between 600 million and 700 million euros. This corresponds to an improvement of around one billion euros compared to the second quarter.

This assumes that there are no further extensive restrictions and that the number of customers in stationary retail continues to increase. Rorsted did not want to give a forecast for the entire year.

In March, the shareholders will find out how their company will continue in the long term. Then Rorsted wants to present the next five-year plan. However, it is already clear who will implement the project: the supervisory board has just extended the executive’s contract ahead of schedule until 2026.

More: Adidas loses a third of its sales